Media and conflict. By Antje Bauer 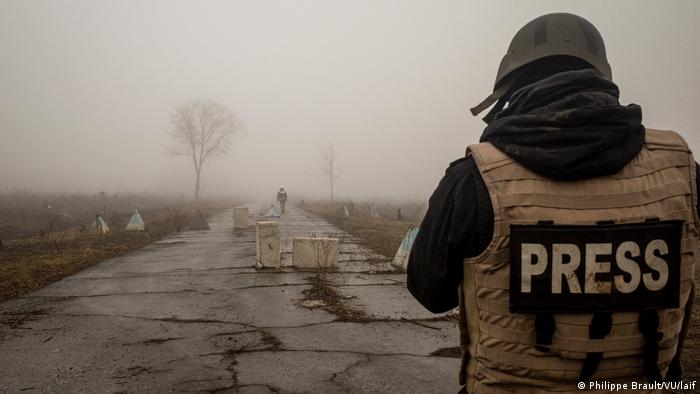 A journalist stands in front of road blocks near the city of Zolote, Luhansk region, Eastern Ukraine

"That doesn’t work for us" is the objection DW Akademie trainers often hear when working with journalists in the Global South to implement best-practice rules for conflict-sensitive reporting. One cannot neutrally present the concerns of the other side, they say. And certainly not the suffering on the other side. Some topics are best left alone.

There are weighty reasons for these objections. In armed conflicts, journalists risk their lives if they show understanding for the opposing side through their reporting. Media professionals are often persecuted when they report on social, economic or political conflicts, when they criticize the powerful or dare to question conventions. Journalists who work under precarious conditions are often subjected to pressure, e.g. in how funding is bestowed or withdrawn, to report in a specific way. So how can conflict-sensitive reporting in the Global South be achieved, despite all the obstacles?

The media in the Global North do not say, "That doesn’t work for us" when it comes to conflict-sensitive reporting, but rather, "We don’t need that. We are already doing everything right." Really? The debates on discrimination that have sparked both the "Black Lives Matter" and "MeToo" movements highlight the fact that most editorial offices in the Global North are very homogeneous. The majority of editors are still male, white and share a Christian world-view. And this is usually reflected in the reporting. How, for example, is Islam portrayed when the journalists all have a non-Muslim background? Despite a commitment to professionalism and balanced reporting, it remains an outside view. And what does this homogeneity mean for the values and norms disseminated by international media such as the BBC, CNN or DW?

The question of what a lack of diversity means for reporting, especially for a medium with an international audience, is also being debated by DW’s journalists. DW Akademie, DW’s center for international media development, has carried out training courses on conflict-sensitive reporting in many countries in recent years and has found that while this topic is very important, there is usually a lack of ideas on how to report conflict sensitively under difficult circumstances. All too often, the media are part of the conflicts and not part of their resolution. Consciously or unconsciously, intentionally or not, they exacerbate conflicts.

These experiences and debates are what have given rise to this dossier. It is not intended to be just another textbook for conflict-sensitive reporting — there are already quite a few of them, and the suggestions and advice given there are useful. Unfortunately, however, they are often not easy to implement, so included here are some positive examples from around the globe where media companies or individual media activists have found ways to address conflicts without inciting hatred, and to initiate debate without polarizing. The objection "That doesn't work for us" in the Global South has been countered by media and media makers around the world with examples of how things can work after all, in the hope that they will encourage and inspire new solutions in conflict reporting. At the same time, there is also the matter of sharpening the eye for reporting in the Global North, with all its explicit or implicit bias. There are good arguments against the objection that "We are already doing everything right." Complementing the reports from around the world are some small tools that invite us to question conflicts and to look at them more analytically.

Relatively little space is given to violent conflict, as a lot of attention is already being paid to war and crisis reporting. We wanted to emphasize that armed conflicts do not arise out of nothing, but usually develop slowly and build up — often invisibly for the media — only becoming violent when they have been ignored by politics and the media for too long. For this reason, the dossier focuses primarily on conflicts that are not, not yet, or no longer violent.

The public generally considers journalists to be unshakeable — but they are not invulnerable. In some regions of the world, they constantly bear witness to the suffering of their fellow human beings. Local journalists in particular are directly affected by the conflicts in their environment. But the realization that journalists are also in need of protection is only slowly penetrating the editorial offices and the consciousness of individual journalists. How can media makers react when they are exposed to hostility, including online? And what should they do when they cannot let go of the terrible events they have witnessed as crisis reporters? How can journalists who suffer because of those images and experiences best be supported? For us, this too belongs in a publication that deals with media and conflict.

We examine this question from different angles.

This dossier is intended for media makers of all kinds: professional journalists, citizen journalists, bloggers, YouTubers, lecturers and students of journalism — in short, for anyone who works with media. It is not designed to be compulsory reading. Instead, we hope you will find it pleasurable or at times even inspiring, whether you read it from cover to cover or just dip into a story or two.

Antje Bauer has been working as a reporter and editor for German, French and Italian media, specializing mainly on Mediterranean countries and the Middle East.

How close should we get? Media and conflict

DW Akademie’s new publication collects stories from around the world exploring various roles media play with regard to conflict.