Difficult coexistence between refugees and host communities in Uganda. By Ochan Hannington 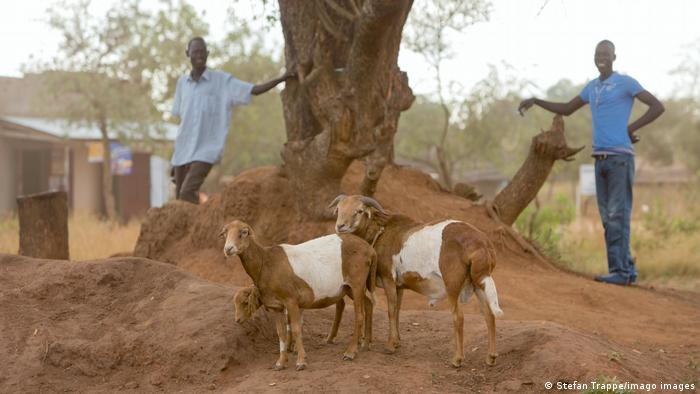 Livestock may cause conflict

Fiona Knight, 23, was on her way home one evening last January when suddenly, she became very scared. "My neighbors and I had gone to collect firewood," she says. "Without warning, some young people from neighboring communities came out of the bush, armed with bows and arrows. They threatened us, and we ran away. But they chased after us together with their dogs. We lost our slippers. And we came back with nothing."

It was not the first time Knight had been threatened since she and her family of three sought safety in the Rhino refugee settlement in Northern Uganda, after fleeing violent conflict in South Sudan. Over the past few years, hundreds of thousands of South Sudanese refugees have arrived in the country, building huts on government-allocated land. Formerly remote communities soon found themselves next to a refugee settlement that could assume the size of a city within a matter of weeks. Initially, the refugees were well received. But then conflicts between them and the local population arose — mainly over the increasing lack of resources.

Firewood, which is essential for cooking, is one example. Bushland where both refugees and members of nearby communities gather firewood is normally a resource that’s open to all. But in the areas with a high concentration of refugees, vegetation disappeared within the first year. That means refugees like Fiona Knight have to walk further from their settlement to access bushland that is owned by locals.

Some Ugandan villagers would like to sell the firewood, but the refugees can’t afford to buy it. The solution? "You either sell some of your food rations so you can buy firewood, or you keep it all to sustain you until the next food distribution, and sneak into the bushes in order to find firewood yourself," says Knight. Meanwhile, attacks on refugees have become more frequent. When young people at a settlement hear that someone from their camp has been attacked by locals, they often go out seeking revenge.

Roaming animals are another reason for quarrels. Some refugees fled along with their goats and cattle. But getting grassland for them to graze is next to impossible, so they release their animals to find food on their own. In Bidibidi, Uganda’s largest refugee settlement, this is the main cause of conflict between refugees and their hosts.

Likicho Ramula lives in a village near Bidibidi. She is standing in her garden of soybeans, uprooting weed. "Last year, I had planted half an acre of maize and groundnuts," she says. "In April, a number of goats entered the garden and destroyed all my crops." The 25-year- old mother of three missed out an entire rain and planting season and had to wait months until the second and last planting season came. For the rest of the year, food was scarce. Ramula reported the matter to local authorities, hoping to get some kind of compensation. But all she received was a "sorry" from the animals’ owner. "The authorities only gave the owner of the goats a warning, and they asked me to forgive the man," she says.

Despite the fact that the refugee settlements are generally located near established villages, even sharing schools, health centers or water points, communication between the two communities is far from easy. And that’s not just because most Ugandans are crop farmers while most South Sudanese raise livestock. They also belong to different ethnic groups, speak different languages and have different cultural backgrounds. And they get their information from different media sources. Community radio stations on both sides of the border between South Sudan and Uganda have often exacerbated the conflicts by broadcasting unverified information. Nearly all broadcast media serving the border populations are small and underequipped. The media bosses, who are usually businessmen, tend to employ mainly secondary school drop-outs, with no prior skills in journalism. Additionally, the stations lack the capacity to provide timely, fact-checked and balanced information.

In October 2019, five people died during a fight that erupted after some Ugandan radio stations broadcast rumors that refugees had killed a local man who’d been found dead by a riverside. The rumors were never proven. Not long before that incident, the sudden and unexplained death of a local girl led to fierce fighting between refugees and locals in Adjumani district, resulting in a dozen injuries. The fight was initiated by two young men — one refugee, one local — who had been drinking together at a community bar. When they started quarreling, they were quickly joined by their countrymen. "The host community suspected refugees of having murdered the deceased," recalls Josephine Angucia, spokesperson for the local police. In this case as well, the perpetrators were never found.

In order to overcome the mutual mistrust, "dialogue committees" have recently been put in place. These committees comprise an equal number of people from both communities as well as a few "neutral" people from NGOs that operate within the refugee settlements. All members of the dialogue committees are elected, and the committees act as village courts for minor offenses. Geriga Charles is a member of a dialogue committee and represents the refugees of the Bidibidi settlement. "The committees pass bylaws that govern both refugee and host neighborhoods," Charles explains. "They catch stray animals, regardless of whether they belong to a refugee or host community. They apprehend the owners and even penalize them."

On the media side, in 2017, the Cross Border Network was put in place to increase communication and check rumors. "I still recall how anxiety increased throughout the refugee settlements, when we heard on the radio that Salva Kiir had died," says Knight, referring to the president of South Sudan. "The broadcasting of such false news was frequent when I first came to Northern Uganda. But we have not had such a situation since the start of this year."

Uganda has been hosting refugees and asylum seekers for decades. The outbreak of civil war in 2013 in neighboring South Sudan caused more than one million South Sudanese to flee their homes. Though a ceasefire was signed in South Sudan between president Salva Kiir and his former vice president Riek Machar in 2018, sporadic violence and attacks continue to prompt some South Sudanese to flee to Uganda. This country hosts the largest number of refugees in Africa and the fourth largest in the world.

With a population of about 43 million, Uganda is now home to 1.4 million refugees, mostly from South Sudan, Democratic Republic of Congo, Rwanda, Burundi, Somalia and Eritrea. This number is still growing. The South Sudanese refugees are largely settled along the impoverished border districts of Northern Uganda.

Uganda is thought to have one of the most liberal refugee policies in the world. Refugees are allowed to work and to start businesses, and they have freedom of movement within the country. In some parts of the country, they are allotted parcels of land by the government, while in others — mainly in the north, host communities allot land to refugees. They may use this land but not own it.

Those living in refugee settlements receive food rations from international agencies and NGOs. But they also tend to build up small businesses, work on the allotted land and raise livestock.

Conflict between members of the host communities and refugees mostly arises from a lack of resources such as water, animal feed and firewood.