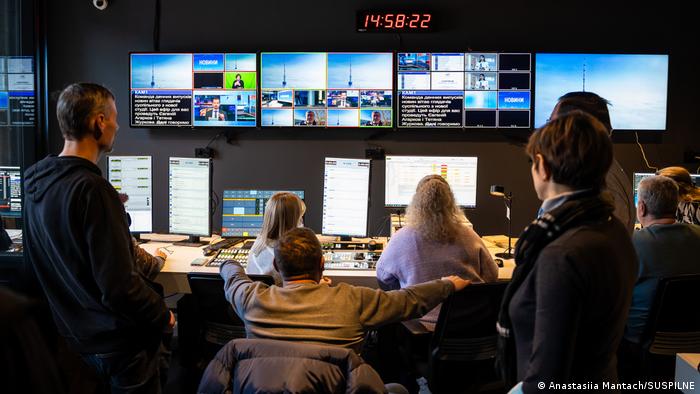 Independent and reliable information in wartime is critical. As such, the public broadcaster UA:PBC alerts Ukrainians to military attacks even when the public warning system fails. DW Akademie is in close contact with its staff and partner organizations, among them UA:PBC, during the war.

DW Akademie has been committed to working in Ukraine since 2014. For example, DW Akademie has established successful projects aimed at training journalists. Since the beginning of the war in February, DW Akademie has worked closely with its partners under challenging circumstances so as to support the partners in a new reality in Ukraine.

Ukraine's media landscape prior to war

Between 2019 and 2021, Ukraine's press freedom ranking according to Reporters Without Borders improved (position 97, up from position 102 in 2019). But while the Euromaidan protests in 2014 led to changes in the country's media law, Ukraine still lacks media pluralism and genuine press freedom.

Television and social networks are filled with Russian propaganda and Ukrainian counter-propaganda. Public media institutions are chronically underfunded and journalists frequently face violent attacks. While the number of cases solved has increased overall, many cases remain unsolved. Afraid of reprisals, journalists often turn to self-censorship, and even more so since the murder of the investigative journalist Pavel Sheremet in July 2016.

The Euromaidan protests did lead to changes in Ukraine's media legislation. It now anchors easier access to information, the privatization of state and local newspapers, and the transparency of media owners. On January 19, 2017, following a lengthy transition process, the state broadcaster was launched as the public broadcaster UA:PBC (Public Broadcasting Company of Ukraine). News and information content now plays a larger role in Ukraine's media landscape and is recognized by the Ukrainian population. In 2019, UA:PBC renamed its stations "Suspilne", the Ukrainian word for "public". Suspilne now has two national television channels, three radio stations and 24 regional outlets.

The public broadcaster, however, still competes with national TV channels that remain in the hands of influential Ukrainian businessmen and politicians, and who are not willing to give up power. The press still focuses on the interests of media owners, making it difficult for independent politicians to present themselves in the media.

Ukraine's mass media cannot fulfill their role as a "watchdog" – the media's role in a democratic society. As a result, Ukrainians are often targets of disinformation and have few opportunities to take part in the public dialogue. Their trust in the national media continues to decline.

The influence of online media, the blogosphere and social media is growing fast. For many, especially for young people, these information channels and discussion forums have become more important than traditional broadcasters and newspapers.

Together with the Kharkiv-based media initiative Nakipelo, DW Akademie is establishing a new journalism traineeship for young editors. Its intense, hands-on approach is a novel alternative to the long, academic journalism training programs offered at Ukrainian universities.

The Ukrainian Media and Communication Institute (UIMK), in cooperation with DW Akademie, offers additional training for university lecturers who teach journalism. This training focuses on participatory teaching methods. Ukrainian universities are also advised on modernizing their curricula. As part of the Journalism Teachers Academy – JTA program, DW Akademie will be cooperating with the journalism faculties at five Ukrainian universities.

DW Akademie is supporting the influential online newspaper Ukrainska Pravda in expanding its qualification programs as part of the School of Business Journalism. A special focus is on consumer journalism.

Another project is aimed at young media users. Although they use the Internet as their main source of information, they often lack media literacy skills for identifying and working against disinformation, propaganda and cyberbullying. Together with DW Akademie, the NGOs Insha Osvita and the Academy of Ukrainian Press are training young people outside of school to promote media and information literacy (MIL) among their peers. These in turn are then able to reflect on their own media consumption and produce media content themselves.

Together with the media initiative Nakipelo, DW Akademie promotes Constructive Journalism (CJ), an approach that focuses on balanced, solution-oriented reporting. This is particularly helpful in crisis situations and enables journalists to present the facts in detail as well as possible ways out. DW Akademie trains journalists in this and supports them in producing CJ content.

Since 2017, the EU project "Support to the National Broadcaster of Ukraine" has supported UA:PBC in its transition from a state broadcaster to a modern public broadcaster. The project includes a new cross-media newsroom located in the heart of Kyiv. The newsroom has an improved editorial structure, a modern production system and high-quality equipment, with support from DW Akademie and BBC Media Action. The Ukrainian public will have fast and easy access to reliable news available all UA:PBC information channels – its website, social media networks, TV and radio.

DW Akademie has also advised UA:PBC on organizational development, and has supported the development of the journalism training institute Public Media Academy (PMA). Two PMA hubs have been set up in Kyiv and Odessa where journalists, media professionals and active civilian population can also network. Since 2020, the Public Media Academy Junior has been offering young people aged eleven and older training in media and information literacy (MIL). The project is supported by the European Commission and the German Federal Foreign Ministry.

Ukraine's public broadcaster UA:PBC is getting a new, cross-media newsroom. For the Ukrainian public, this means fast, reliable, up-to-date news on all broadcast channels.

Ukraine: "Odesa Media Hub" takes a look back at its first year

Odesa's first media hub was opened a year ago. How do you build your community with the help of media hubs? And what happens to the offline network during a corona lockdown? (29.04.2020)

Ukraine: Spotlight on the regions

Four regional stations of Ukraine's public broadcaster UA:PBC have come closer to their audiences. Their pilot TV program Spilno reports from the rural regions of this vast European country. (24.09.2019)

Ukraine: a new multimedia newsroom for public broadcasting at UA:PBC

Ukraine's public broadcaster UA:PBC is getting ready to launch its newly designed multimedia news service. With support from DW Akademie, Newsroom 2.0. is to be the country's fastest and most trusted information source.