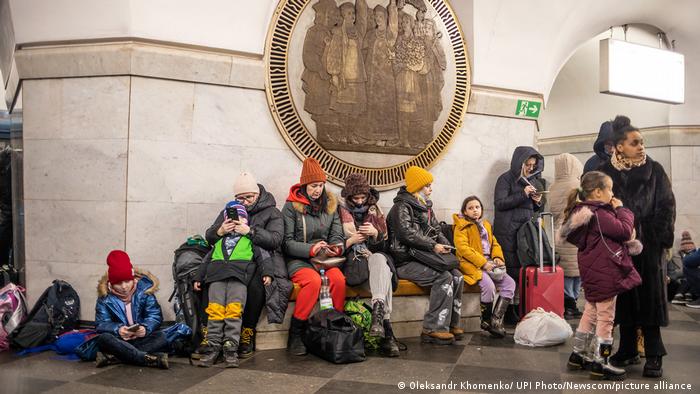 "We are broadcasting continuously. If there is an airstrike in one place, another regional studio switches on," a UA:PBC spokeswoman wrote on February 28. "Since we have studios in all regions [of Ukraine], we support each other."

UA:PBC is Ukraine's public broadcaster, which DW Akademie has supported since 2015. Most recently, it was able to establish a new multimedia newsroom in Kyiv, from which journalists are currently reporting, despite the risks.

"There are times when we can only play music on the radio because our staff has to get to safety," the spokeswoman continued.

DW Akademie maintains close contact with its staff and partner organizations in Ukraine, including UA:PBC. "The station's journalists are doing an excellent job, and they are doing so despite great personal concern and stress and the many uncertainties that a rapidly changing situation brings," said Carsten von Nahmen, managing director of DW Akademie.

"The importance of independent and reliable information has never been greater. We stand by all our partners in Ukraine," he added. 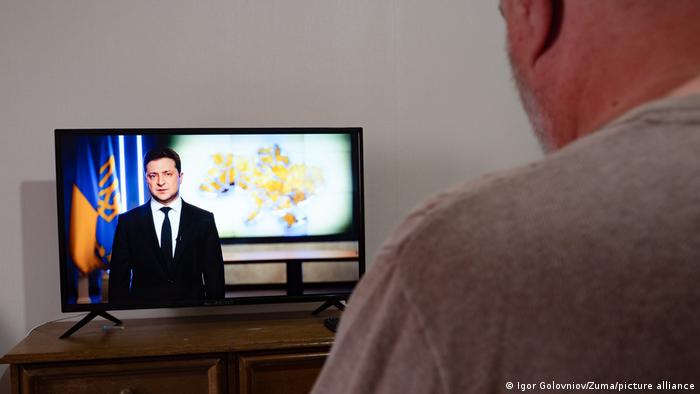 A man watches a televised address from President Volodymyr Zelensky on February 24, 2022

A senior staff member of the Ukrainian Media and Communication Institute (UMCI), another partner organization, reports how important, and painful, it is to stay informed.

"It is simply impossible to watch the news without pain. You cannot bear it. But for me as a journalist and my colleagues, it is very important that the world understands that this is real and Russia lives in an imaginary world, that Russian propaganda is evil," said the staff member.

One of the project managers, who normally oversees the Journalism Teacher's Academy, a joint project with DW Akademie, fled the capital for western Ukraine. It had become too unsafe in her neighborhood in Kyiv, near Antonov International Airport. With a three-year-old child and heavily pregnant, she had no choice but to get out of the city. She had offers to flee Ukraine before the fighting broke out but didn't have the heart to leave.

"I can't fight, but I still want to be here and do what I can," she said. "I can imagine being far from home is even harder than being here, closer to the front lines."

Torn between staying and going

Currently, two local DW Akademie staff members and one Bonn staff member are still in Ukraine. DW had already offered all employees in Kyiv the opportunity to leave for Lviv in the west of the country. Due to the worsening situation, the company has meanwhile initiated the evacuation of employees and their relatives from Ukraine. Many of them, as well as employees of local partner organizations, are torn between staying and leaving, between seeking protection and staying in their country and with their families. 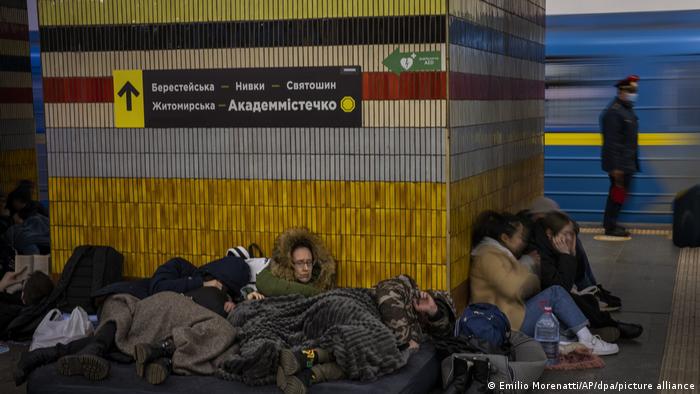 Residents of Kyiv take shelter in a subway station

One DW Akademie project coordinator has since fled Kyiv with her husband and daughter to a town in western Ukraine. She said she is very worried about family and friends who have remained in the capital.

"We have it comparatively comfortable here, unlike our friends who have been sleeping in metro stations for three or four nights already," she explained, referring to the subway stations and underground parking garages that serve as bunkers for the people in Kyiv. Another local DW Akademie staff member has remained in Kyiv.

"I'm focusing on staying safe and calm. I'm not a journalist, so for now I’m following volunteer initiatives if I can join any," she wrote via chat on February 28. She said she is at her home in Kyiv and is forcing herself to be optimistic.

"We here very much appreciate [DW's] support. We trust our army and our people. We are staying focused and are ready to rebuild our country as soon as possible," she said.

Reliable information more important than ever

The coordinator of an EU-funded media development project, who normally oversees a fund for media professionals, now suddenly has more pressing issues at hand.

"We are producing and translating the latest news on the war into English for the world because there is a lack of it," he said.

Together with a colleague, he is now in a western Ukrainian city. In addition to disseminating information, the two are also organizing help on the ground.

"We buy food, water and blankets for refugees. We are stockpiling supplies in case the situation worsens. This night was calmer than the previous one," wrote the coordinator of the EU project. "However, we expect to face another difficult night."

DW Akademie is aware of the names of the staff members and partners, as well as their current location. For their protection, we have decided not to include that information.

Update from March 17, 2022: DW Akademie has since been able to help more employees leave Ukraine. Currently, there are two colleagues still in the country.