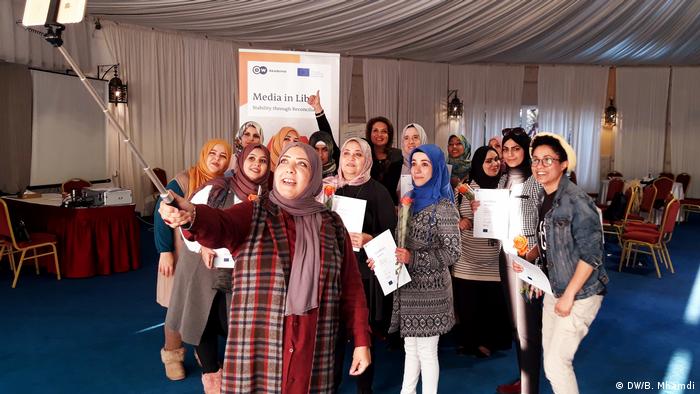 Libya has reeled from instability for more than a decade. Since the fall of the long-ruling dictator Muammar Gaddafi in 2011, the North African country has been caught up in a turbulent transformation process, struggling with political divisions and a lack of security. Moves towards a democracy have been far more difficult than first hoped for, and in many regions, armed groups have established local power centers, influencing the country’s political development.

The ongoing conflict has affected all aspects of public life, especially the media sector. The population’s right to freely access independent information is severely restricted. In 2022, Reporters Without Borders Press Freedom Index ranked Libya at 143 out of 180 countries, with the state still unable to create conditions for a pluralistic media system. Powerholders use state broadcasters mainly as propaganda instruments; private broadcasters for their part are primarily financed from abroad, often with a clear political agenda in a conflict that has gained international scope.

Social media are now the main information source for many Libyans. Most have a Facebook profile, and social networks such as Instagram and TikTok are also popular. Factions involved in the conflict try to use these networks to their advantage, and many conflict experts now refer to social media as an “additional battlefield.”

DW Akademie has been active in Libya almost continually since 2011. Ahead of the country’s first parliamentary elections in 2012, DW Akademie conducted in several regions a project on election reporting. Two EU-funded projects - “Media in Libya I - Stability through Structure” (2013 - 2016) and "Media in Libya – Stability through Reconciliation" (2017-2021) promoted Libyans' right to freely access independent information and focused primarily on women and disadvantaged groups. in addition to basic and advanced training for journalists and fact-checkers, the projects have helped develop successful journalistic projects, including the "Libyan Citizen Service" and several fact-checking initiatives.

DW Akademie has also conducted two further projects in the country since 2021 that focus on fighting digital disinformation, which continues to increase. The project “Media in Libya III - Immune to Disinformation”, co-funded by the EU and the German Federal Foreign Office, as well as the EU-funded project “Innovations for Peace”, which includes five additional countries in the MENA region, promote and combine digital technology with professional journalism. Key objectives here include establishing a nationwide and internationally recognized fact-checking network, developing initiatives to improve media literacy among the Libyan population, and promoting digital innovations to counter fake news, hate speech and social polarization.

Locations: Tunisia and Libya, as well as the Palestinian Territories, Jordan, Lebanon and Algeria

Libya: How media can create stability in crisis regions

With a new three-year project, DW Akademie will be promoting the human right of access to information in Libya. The country has been in an ongoing crisis since 2011. (02.10.2018)

The ongoing crisis in Libya has crippled the country and its media sector - information has become a rare commodity. DW Akademie is developing a Cloud News Agency as part of the EU project "Stability through Structure". (13.02.2015)

On the invitation of the EU, DW Akademie presented an extensive project aimed at reforming Libya's media sector. Diplomats and senior members of the Libyan government attended the event held in Tripoli. (31.03.2014)