Libya: How media can create stability in crisis regions

A new DW Akademie three-year project will be promoting the human right of access to information in Libya. The country has been in an ongoing crisis since 2011. 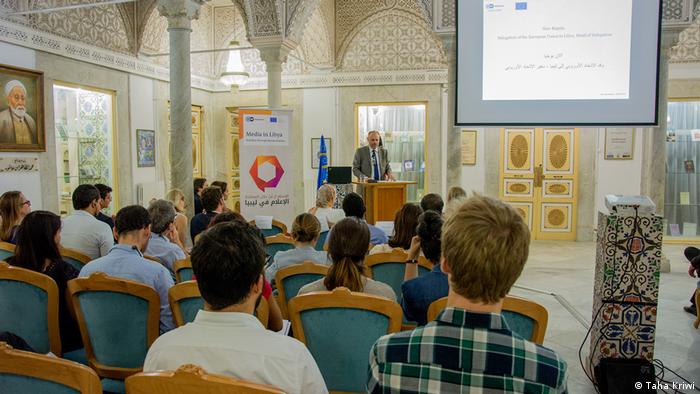 Alan Bugeja, Ambassador of the European Union Delegation in Libya, at the opening ceremony of "Media in Libya – Stability through Reconciliation"

"Independent media – media that that people can trust – are essential for societies," said Alan Bugeja, Ambassador of the European Union Delegation to Libya.

He was speaking at the project's opening ceremony held September 2018 in the Tunisian capital, Tunis. The project, "Media in Libya – Stability through Reconciliation",   will initially run in Tunisia until tensions lessen in Libya.

DW Akademie and the EU delegation had invited 60 representatives from the Libyan government, Libyan participants of DW Akademie's projects and the international community to the launch of the three-year media development project.

The EU-funded project is aimed at promoting the right of access to information for those living in Libya.

"Providing the public with objective information, free of ideological or political divides, is of great service to people," said Ambassador Bugeja. Objective reporting, he said, introduced rationale and restraint, and stressed that these were "elements much needed for political stability and a democratic life."

Referring to EU's commitment to the human right of freedom of opinion and expression, the ambassador emphasized that "the EU supports Libyan and foreign journalists, as well as Libyan institutions, in their efforts to improve the governance and quality of Libya's media landscape." 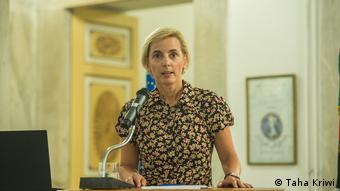 Focus on minorities, women and youth

"We are convinced that a functioning media sector, quality journalism and well-informed citizens are essential for sustainable political, social and economic development," said Natascha Schwanke, head of DW Akademie's Africa department, speaking at the ceremony.

This, she said, was the reason why "we have included all social groups and placed a special focus on ethnic minorities, women and youth." 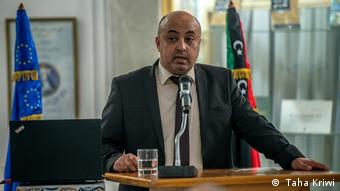 Jalal Othman, head of the media department of Libya's president's office, added that the media needed to reflect all ethnic groups in the country. Libyan media, he said, "are fueling the conflict. The real drivers of the ongoing divisions are extremists who have pervaded media platforms."

"The focus over the next few years will be to provide additional training for Libyan journalists," said Jan-Philipp Scholz, project manager with the DW Akademie team. "In the long term," he said, "training will also be conducted in Libya itself." 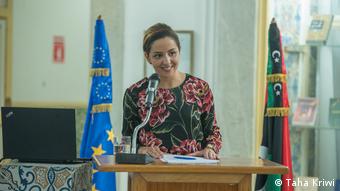 An important aspect of the project is to train Libyan journalists to become media trainers themselves so that they can effectively pass on their know-how to colleagues.

DW Akademie's journalism training will be practice-oriented, focusing on various journalistic formats. Libyan journalists will, for example, be developing a political talk show targeted at young audiences, together with media professionals from all parts of the country.

Also part of the opening event was an exhibition of a photography competition sponsored by DW Akademie and the EU Delegation in Libya. Eight photographers were honored for images reflecting Libyan landscapes, customs, traditions and craftsmanship.

The competition had been open to all Libyans and focused on highlighting everyday Libyan culture for those who know little about it. More than 300 professional and amateur photographers had taken part. The prize for each winner was a one-week DW Akademie photography workshop in Tunis.

DW Akademie conducted other workshops this year, ahead of the country's local elections held in May. The workshops focused on political communication and reporting. Journalists from various parts of the country learned about election reporting while representatives from Libya's Central Committee for Municipal Council Elections learned how to work with the media.

DW Akademie has been active in Libya since September 2011. It ran workshops on political communication and election reporting in 2012, in connection with Libya's first parliamentary elections. The current EU-funded three-year project "Media in Libya – Stability through Reconciliation" builds on a previous EU project, "Media in Libya – Stability through Structure", that ran from 2013 to 2016.

Set up jointly by the EU and DW Akademie, the virtual Libyan Cloud News Agency (LCNA) is based in Tunis and relies on satellite-link technology and the use of the virtual cloud platform for data storage and Transmission. (19.11.2015)