Libya goes to the polls in 2018. Citizens of many municipalities are called on to vote for their local councils. DW Akademie helps politicians and journalists by providing them with communication skills training. 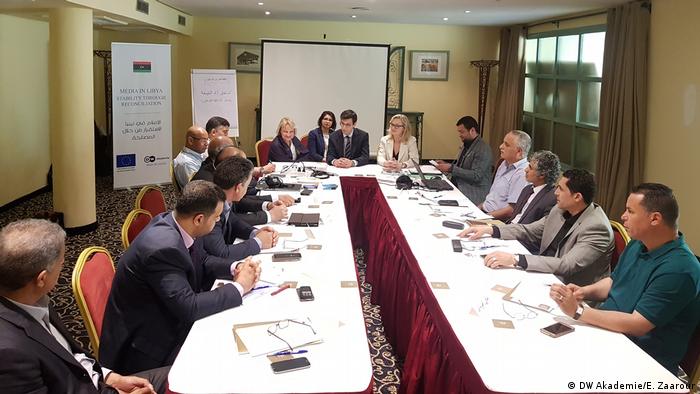 The local election cycle in Libya started in Zawiyah on May 12. It was peaceful but the turnout was low. The next call to vote will be just after Ramadan in Bani Walid and almost 100 other municipalities. Some of them never had a council before. Local councils are elected for a four-year term; for the most part, the last local elections were held in 2013 and 2014 and many mandates will soon expire. That is why Libya’s Central Committee for Municipal Council Elections (CCMCE), together the help of DW Akademie and the EU Delegation to Libya, are trying to raise awareness of how decentralization and local power can benefit citizens and help them to a better future.

Interview training in front of microphones and cameras

In a three-day training held by DW Akademie, nine CCMCE members were trained to give statements and interviews in front of microphones and cameras. One of the exercises entailed planning and conducting a press conference, guided by a neutral moderator. How does one manage and reply to aggressive or critical questions asked by journalists? Why shouldn’t one deny mistakes, for example, in the case of fraud? Why is it important to establish good relations to the press? Even though training conditions were exceptionally difficult during Ramadan, the CCMCE members took part in training sessions in the evening hours to benefit as much as possible from the workshop.

"In the future I can deal with the press better. We did this despite fasting during the training," says Seddik Abujrida, head of the CCMCE training department. "We benefitted a lot. The trainers highlighted topics that I hadn’t paid attention to in the past, especially in terms of body language and facial expression. I also learned building a strong core message using figurative language and concrete examples."

Future plans for the three-year project

Now CCMCE, DW Akademie and the EU Delegation to Libya are discussing further workshops to continue their new cooperation. The planned topics encompass crisis communication, press releases, establishing a media action plan, and PR, as well as social media and mobile reporting for events. A "train the trainer" seminar is being planned for CCMCE election trainers. The activities are part of a three-year project called "Media in Libya – Stability through Reconciliation", funded by the European Union. The project will also offer workshops for journalists, focussing on election knowledge, journalistic skills and ethics.

DW Akademie promotes the production of independent news from all regions of Libya. (07.07.2015)

Set up jointly by the EU and DW Akademie, the virtual Libyan Cloud News Agency (LCNA) is based in Tunis and relies on satellite-link technology and the use of the virtual cloud platform for data storage and Transmission. (19.11.2015)