In Bangladesh, DW Akademie helps integrate journalism classes at national universities into the media industry. The aim is to improve the standards of journalistic reporting. 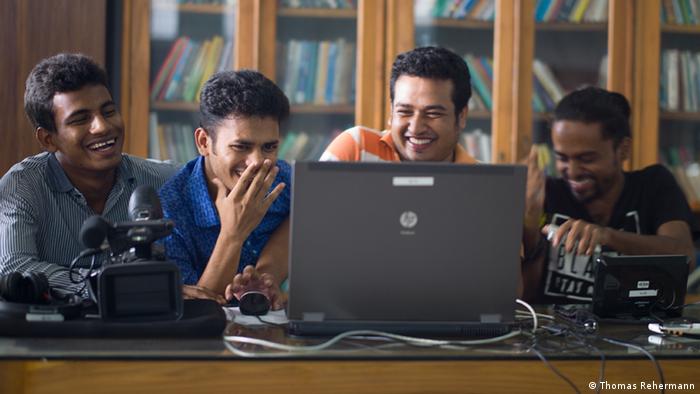 News coverage in Bangladesh is very politically charged and polarizing, with the media favoring either the ruling party or the opposition. Independent, unbiased journalism is rare. The choice of topics is based on the economic interests of corporate groups that support various media outlets, while state radio stations are still under the direct control of the Ministry of Information.

Critical reporting is under threat because journalists are intimidated or attacked, or in some cases, even tortured and murdered. Since the beginning of 2015, five bloggers labeled atheists have been brutally murdered because they dared to criticize the rise of religious extremism. Many journalists now censor themselves. Media representatives, opposition politicians and the NGO Transparency International say that a recent media law passed in August 2014 has restricted press freedom even more. As a result, people in Bangladesh have restricted access to information.

DW Akademie in Bangladesh focuses on improving the quality of journalism training at universities. This also includes partnerships between journalism institutes and the country's media industry. The long term goal is to improve journalistic reporting. This is why DW Akademie cooperates with the two largest regional universities, Rajshahi and Chittagong.

At the same time, DW Akademie also supports a network of Bangladeshi universities. Members of the network provide each other with information on trends and best practice examples in journalism training. An online platform is being developed together with the non-governmental organization Article 19 to provide all journalists in Bangladesh with background information on sensitive topics such as media ethics, digital security and the legal framework for the media.

As of 2018, DW Akademie has also been working with the Rohingya people, an ethnic group seeking refuge in the country, and is training them to work as camp reporters in a cooperation with Community Radio Naf.

Since August 2017, more than 700,000 Rohingya have fled western Myanmar to neighboring Bangladesh. The Rohingya people are not recognized by Myanmar or Bangladesh. They have been persecuted and killed, and many of their villages have been burned down. The United Nations has condemned the ongoing persecution of the Rohingya in Myanmar as ethnic cleansing.

The majority of the refugees currently live in camps where they are given protection and basic supplies from aid organizations and the Bangladeshi authorities. In the refugee camp Kutupalong near Cox's Bazar, some Rohingya refugees and volunteers from the community radio station Naf are working together on articles and reports in a joint program that enjoys the support of DW Akademie.

Corruption, crime, religious conflict: In Bangladesh, there are enough problems for the media to report. DW Akademie supports Constructive Journalism in the country – and figures out solutions.

Sabera fled the Rohingya genocide in Myanmar and now lives in a refugee camp in Bangladesh. Like many women she still faces gender-based violence but has been fighting for equality – via the radio.

Reporting the coronavirus at a Rohingya camp: "Saving lives is now the most important task"

A community radio station is working to inform the Rohingya in a refugee camp in Bangladesh about the coronavirus through reports over the loudspeaker and special broadcasts. The production conditions are a challenge. (08.04.2020)

Two years ago Rohingya began fleeing Myanmar to Bangladesh. Now many are trying to escape the hardships inside the refugee camp. Some are heading to Malaysia in small boats, risking their lives in the process. (30.08.2019)

A year ago, hundreds of thousands of Rohingya began fleeing Myanmar and crossing into neighboring Bangladesh. Five refugees and locals, trained by DW Akademie to be radio reporters, describe their experiences. (24.08.2018)

Bangladesh: The potential of community radio

Many radio stations in Bangladesh produce unprofessional or politically biased reports. Community radio stations, however, could soon be providing reliable information thanks to DW Akademie Support. (26.03.2015)