Three experts from Colombia, Egypt and Malawi spoke about the challenges facing local media in providing reliable news and information during the COVID-19 pandemic. Their solutions: networking, collaboration and trust. 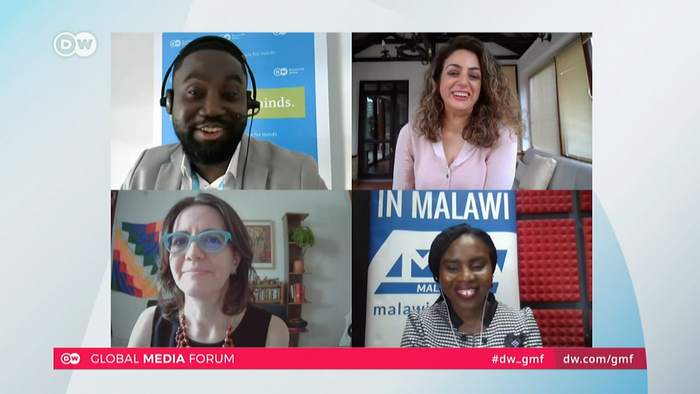 "The solution to overcome the challenges of the pandemic is to network," said Belén Pardo Herrero from the community radio station Vokaribe in Colombia. "To network strengthens communities and local media."

Herrero was joined by media expert Teresa Temweka Chirwa-Ndanga from Malawi and journalist and entreprenuer Dina Aboughazala from Egypt in the panel "Information saves lives - The role of local media in fighting the  infodemic" on June 15 at the DW Global Media Forum. The panel was supported by the German Federal Ministry for Economic Cooperation and Development (BMZ) as part of the initiative "Transparency and media freedom" being implemented with DW Akademie.

DW's  Eddy Micah Jr. ("The 77 Percent") moderated the event. The women engaged the online audience with personal anecdotes on how local media in their respective countries worked to keep their communities informed during the COVID-19 pandemic. They also offered advice on how local news outlets can better stand against the dis- and misinformation that often spreads on social media during a crisis.

"Yes, networking and collaboration. The local press needs to collaborate," said Aboughazala, founder of the media platform Egab.co. Aboughazala explained how the media in Egypt, like in many countries around the world, suffered financially during the pandemic. Too often, she added, local journalists did not have the resources to fact check false news and rumors.

"Unfortunately, with the spread of misinformation, local journalism has not been able to keep up with the speed of information," she said.

Chirwa-Ndanga, an investigative journalist and chairwoman of the media organization Media Institute of Southern Africa (MISA) Malawi, spoke about how the existing structure of media in Malawi made accurate reporting about the pandemic difficult. Too often, she said, media houses act in the interest of politicians and the private sector, not for the public good.

"In Malawi, there is a lot of corruption in media, because even the editor is corrupt," she said. "[The people] do not trust the media."

Local media: Are they able to fight the infodemic?

For Pardo Herrero, the main objective of Vokaribe is not just to deliver reliable information to their audience but to make it more accessible by providing it in the indigenous languages spoken by the community.

"That is very different here in Columbia," said Pardo Herrero while describing the overall situation in Latin America. "Here community radio stations are often the only reliable source [available] in indigenous languages."

All three stressed that more resources and support were needed to help local media survive the pandemic financially. But they also expressed hope and optimism for the future of local media. Afterall, added Chirwa-Ndanga, journalists who work for local media are also members of the communities they serve.

"Local media lives the same lives, has the same problems, needs the same solutions as the local community," she explained.

Germany's Federal Ministry for Economic Cooperation and Development (BMZ) and DW Akademie have launched the initiative "Transparency and media freedom – Crisis resilience in the global pandemic". The goal is to strengthen the resilience of local media so that people are able to make informed decisions.

In Africa, COVID-19 is posing a threat to all levels of society but few are aware of the effects it is having on the media organizations and journalists there. Many could face financial ruin.