Colombia: Radio from the street

People in the southern districts of the Colombian city, Barranquilla, rarely make the news. If they do, the reports are seldom positive. The community radio station Vokaribe wants to change this, using a mobile studio.

They're wearing striped pants and black tops, and have a confident grin on their faces. Spectators applaud as they dance along the sun-baked asphalt and the coach smiles with pride.

It's a special performance. The group "Siluetas" is dancing on the radio – and that's as unusual as it sounds. The radio program "Informativo a la Calle" ("News from the street") is being broadcast live from the Barranquilla district, La Paz. This is the third of ten radio shows that Vokaribe community radio will be broadcasting this summer – every Wednesday from a different district in Barranquilla's south.

Stories of change in neglected areas

Dance trainer Nelson Altahona is one of the studio guests and voices his concerns. He has been running his project for the last ten years aimed at giving young people a better perspective. Some of these youths have experienced violence at home, others have a history of drug trafficking or petty crime.

There is no cultural center in La Paz and the group has little money. As a result, they train three times a week on the street in front of Nelson's house. Over the last decade Nelson has worked with close to 500 young people. 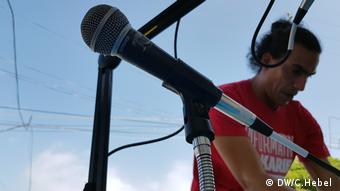 The staff at Vokaribe set up their mobile studio in various Barranquilla neighborhoods.

There are numerous stories like these in the city's southern districts but they rarely make headlines in Colombia's major media. When the media do report on the neighborhoods, the focus is always the same: fear, car crashes, violence, drugs. But the reality - as so often - is much more complex than this.

Many of Barranquilla's neighborhoods came about in the 1960s and 1980s, when people from rural areas moved to the city. These days most neighborhoods have electricity, paved roads, a school and hospital, but unemployment is high, informal employment is common, and gangs and drug trafficking create problems. Still, many people and organizations in these communities are committed to change. 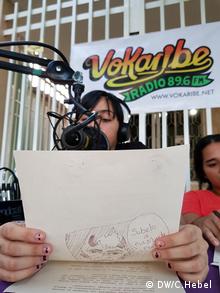 The program offers a platform where people can voice their hopes and concerns.

Broadcasting where the target group is

The mobile radio programs offer locals a voice – they might be members of a cooperative that promotes entrepreneurship, for example, or women from the "Madres Comunitarias", a type of neighborhood childcare collective, or a school principal who has put "peace-building" on the curriculum.

Vokaribe also works together with the "Junta de Acción Comunal", the locally elected citizens' council, in organizing the programs.

The mobile studio itself needs very little equipment: just cables, a colorfully decorated table, two large speakers, a mixing console and a few microphones. This way, Vokaribe can broadcast from where the target group is, with a goal to involve the locals and attract more listeners.

The format is the result of Vokaribe workshops that focused on citizen journalism, and where radio producers were coached by DW Akademie and the "German Cooperation" initiative. Both have worked with the station for many years in terms of training, consulting and some funding. 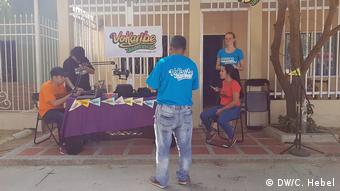 The studio on the street only needs a table, folding chairs, a mixing console and a few cables and microphones.

Citizen reporter Octavio González has been with Vokaribe ever since it was founded 24 years ago. He puts the program together with colleagues, and goes to the neighborhoods to collect stories and visit organizations. He also does the advertising.

Once the program is on air, he makes sure that the guests do not monopolize the show so that audience members get a chance to speak.  A major goal is for people to see radio not just as something they consume, but as something they can actively take part in. The studio's motto is "Haz tu propia radio!"("Make your own radio show!)

Infrastructure is an issue on the program almost every week. Locals often have no access to electricity, and waste disposal, for example, is a problem in Los Rosales. And listeners are often cautious. If there are listeners who do not want to share their worries or dreams on the radio, it might not be because they feel shy but because they're afraid.

Freedom of expression is still restricted in Colombia, and fear spreads whenever prominent social activists are murdered. Paramilitary groups and gangs are present in some of the neighborhoods. Criticism is not welcome. And that is why these live broadcasts can be so important.

Seven more "Informativos a la Calle" are to follow this summer. After each program has aired, the team, under the direction of coordinator Patricia Rendón, discusses and evaluates it to see if anything needs to be added or changed to make the next show even better.

One idea is to invite city officials on the program so that people's criticism or suggestions can be heard by those in charge.

Nelson Altahona and his "Siluetas" dream of having a room where they can practice, a room with a mirror, wardrobe and costumes. After the show, Nelson approaches Father Cyrilo Swinne.

The clergyman founded the Biblio-Paz library where Vokaribe has its broadcasting studio. And the clergyman has an idea. He knows of a house for sale that would be big enough to house a dance studio. If it works out, "Informativo a la Calle" will have played a role.

History will not be forgotten in Colombia

Two DW Akademie projects support the reappraisal of the decade-long conflict between the government and rebel groups in Colombia. The documentary film by a local television station served as an example. (08.12.2017)

Colombia: radio broadcasts to watch – and join in

People in the southern districts of the Colombian city, Barranquilla, rarely make the news. If they do, the reports are seldom positive. The community radio station Vokaribe wants to change this, using a mobile studio. (20.08.2018)