Introduction: The power of the past

Examples from Colombia and Belarus. By Antje Bauer 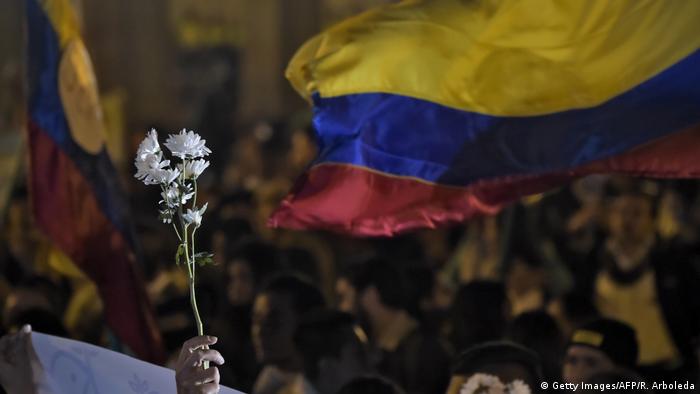 March for peace in Bogotá, Colombia

When is the right moment to deal with the political conflicts of your own country’s recent past? Do these old conflicts gain new life when they are addressed, rekindling political polarization? And how does a society cope when perpetrators and victims live together side by side without coming to terms with the past and without justice being given to the victims? The media play an important role here. Do they ignore these questions or tackle them? And if so, do they do so neutrally, or do they take sides? And whose side do they take?

The armed conflict in Colombia may have lost intensity, but it is not over. The wounds of the past still hurt. There are different approaches to coming to terms with what has happened and seeing former enemies as fellow human beings. Our author Margarita Isaza describes how a media project in Medellín, supported by DW Akademie, helped open up a dialog about the past and encouraged hostile neighbors to begin speaking to each other again.

In many countries, especially less democratic ones, history is not analyzed critically. Rather, a certain interpretation of this history is decreed from above — often legitimizing today's ruling parties. Media that unquestioningly adopt such interpretations make themselves the henchmen of politics. By contrast, media that openly question these unscientific narratives often find themselves exposed to the reprisals of the powerful. So what to do?

The example of Belarus shows how an autocratic ruler can wield a historical narrative for his own purposes. When in the 20th century National Socialist Germany occupied Belarus — then part of the Soviet Union — they proceeded to extermine the local Jews. The fact that a part of the Belarusian population collaborated with the Germans is concealed today in order to portray the Belarusians as a people of victorious resistance against the Nazis. This narrative insults the victims a second time and is used primarily to disqualify the opposition. The Belarusian magazine ARCHE counters this narrative by publishing scientific articles, some of which were first published abroad. Kyryl Savin asked the editor-in-chief of ARCHE, Valeriy Bulgakov, how such a thing is possible in a repressive state.