Late hugs from the neighbors

How a film project reunited a village in Colombia. By Margarita Isaza Velásquez 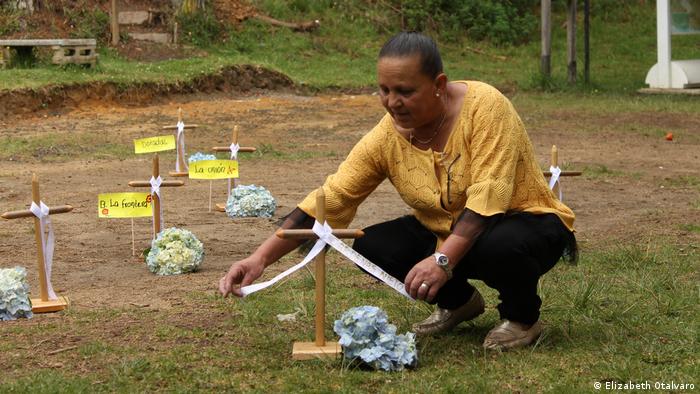 Gertrudis Nieto at the tomb of her son.

The village of Sonsón, with some 30,000 inhabitants, can be reached from Medellín by a winding road that passes through cornfields, avocado plantations, valleys of different shades and high mountains of the Andes. Like so many settlements in this western part of Colombia, it experienced the onslaught of war at the end of the 20th century: the armed groups of the FARC, the ELN, the United Self-Defense Forces of Colombia and the army troops often clashed over control of the prosperous territory, coca crops, communication routes to the center and south of the country, and perhaps also to gain some support among the inhabitants of that area.

At the beginning of the 21st century, the situation in the eastern region of Antioquia, where Sonsón is located, became more acute. The entrances and exits of Sonsón were constantly besieged with illegal requisitions and checkpoints that sometimes ended in the kidnapping of citizens and the murder of peasants and public officials. Men and women were found dead on the side of the roads, hundreds of families from rural areas fled to Medellín, and there was a general atmosphere of anxiety. This was the situation in 2002, when Gertrudis Nieto lost her fourth child, Jesús Amado.

The 19-year-old boy was unemployed and saw no prospects for his future in Sonsón, so he accepted an offer from a local commander, who promised he would earn money to support his family as a "soldier" — albeit illegally. He left home one morning and his mother, Gertrudis, learned that he was encamped with an armed group, made up of about 100 teens and young adults from the region, in a recreation center at the entrance to the village. She says the camp was operating "in full view of the authorities who were patrolling the area."

On the night of June 13, 2002, the rumble heard by the people of Sonsón made it clear that something was going on in the paramilitary camp. The next day it emerged that 18 boys who were training to be paramilitaries had died in an alleged battle with the official army, from which not a single soldier was injured. Some people from the area say that there was collusion and collaboration between the armed groups initially, but that the pact was broken, and a confrontation took place in the form of an ambush.

Gertrudis, a housewife, who also had a job preparing lunches in the restaurant of a community association, buried her son amid hostility from neighbors and acquaintances. They said she had no right to mourn Jesús Amado, nor to consider herself a "victim of the conflict," because he had been a paramilitary. But she, then 44 years old, repeated a phrase that became a mantra: "No one bears a child only to go to war."

So she approached the women in Sonsón who belonged to two civil initiatives: the Association of Victims for Peace and Hope and the Association of Women Weavers for Memory. Both groups were formed around the year 2000, to reclaim the memories and dignity of their members’ loved ones, to ask for justice and truth in the cases still hidden from other Colombians, and to weave back the ties between neighbors that had been strained and broken by war.

Little by little, Gertrudis found friends there who understood her pain and who did not ask her how her son had died. Yet she remained silent because she thought that the memory of Jesús Amado could hurt the mothers of those who had been killed by paramilitaries. Years went by, and on one afternoon during a workshop she felt it was time to tell the story she had been silent about for so long. Journalists from the community channel Sonsón TV, accompanied by advisors from Hacemos Memoria, a project run by the University of Antioquia and DW Akademie, learned about Gertrudis’ story and approached her to tell it as part of an effort to construct a historical record based on peoples’ memories.

Gertrudis told the Sonsón TV journalists about her son Jesús Amado, and that story became the thread of the documentary "Luces y sombras: Reconstrucción de memoria sobre La Pinera" (Lights and Shadows: Reconstruction of the memory about La Pinera), which was broadcast in the village in 2016. "Here, a story was told that only few knew about — something we had not wanted to talk about among ourselves," said John Dairo García, a journalist with the community channel who was part of the filmmaking team. The TV report may have reopened old wounds, but other Sonsón residents recognized the pain caused by the war and stopped judging Gertrudis for having mourned her son. "We knew that this had happened, but we had never dug deeper to learn more about what happened," said Carlos Mario Otálvaro, a Sonsón resident, when he saw the documentary.

After the report aired, there was for the first time a public act of commemoration for Jesús Amado and the 17 other young people who’d died that night in 2002. At the university there was a mass attended by the inhabitants of the village and the women of the Association of Victims, who, with posters, textiles and small wooden crosses, remembered the young men who may have died as paramilitaries, but who were nonetheless sons, brothers and fathers of the inhabitants of their region. "Beloved, my son, you were invited to take a bad step. You accepted it. But God loved you so much that he took you away from me and carried you in his arms. Likewise, forgiveness, Lord, forgiveness, for all those who have caused so much harm in our homes and hearts," wrote Gertrudis with red marker on a poster displayed at the commemoration.

The report, now available on YouTube, continued to be aired on local television, and some victims' groups and citizens from other villages also showed it to create understanding about how poor peasants ended up being recruited, either voluntarily or forcibly.

After the broadcast of the documentary "Lights and Shadows," 14 years after losing her son, Gertrudis began to receive the hugs and condolences that her neighbors in the village once denied her. "A colleague from the association who had once quarreled with me came up to me and said: ‘Forgive me, I didn't know how things had happened, and I know that you have suffered a lot too,’" says Gertrudis.

Today, Gertrudis is a strong, compassionate woman who still works cleaning houses or cooking in small restaurants. She keeps photos of her son on her cell phone. And she remains an active member of Sonsón’s Association of Victims for Peace and Hope, as well as the Association of Women Weavers for Memory, which continues to hold memorials for murdered and disappeared family members in the region, so that memory will be a form of justice.

Violence is a constant companion in Colombia’s recent history. In more than 50 years of conflict between the Colombian state and various armed organizations, more than 200,000 people have died and almost 8 million Colombians have become internally displaced, out of a population of 50 million. The armed struggle has been aggravated by the violence of the drug cartels. Sometimes the armed groups fought the cartels, sometimes they collaborated with them. Nearly 30,000 people were kidnapped and disappeared without a trace.

In 2016, then President Juan Manuel Santos signed a peace agreement with the largest guerrilla group, the FARC-EP. The FARC then began to lay down their arms. But in a referendum held shortly afterwards, more than half of Colombians rejected the peace agreement because there was no consensus in the society on how this issue should be dealt with. It lost legitimacy, as did the accompanying measures for the social reintegration of the combatants.

The ELN guerrilla group and the FARC dissidents who did not join the demobilization process are now continuing the armed struggle. The violence also emanates from new criminal gangs, some of which are recruited from former paramilitaries. All these groups are largely financed by the drug trade. Colombia is one of the countries with the highest production of cocaine worldwide.

Environmental or human rights activists are exposed to a considerable threat. According to the Indepaz peace research institute, 971 Colombians have been killed between the signing of the 2016 peace agreement and July 2020; all of them were active in social or environmental issues at the community level and were therefore in the path of armed gangs.

Margarita Isaza Velásquez is a Colombian journalist living in Medellín.

The victims of Columbia’s many armed conflicts tell their stories. By Matthias Kopp