The victims of Columbia’s many armed conflicts tell their stories. By Matthias Kopp 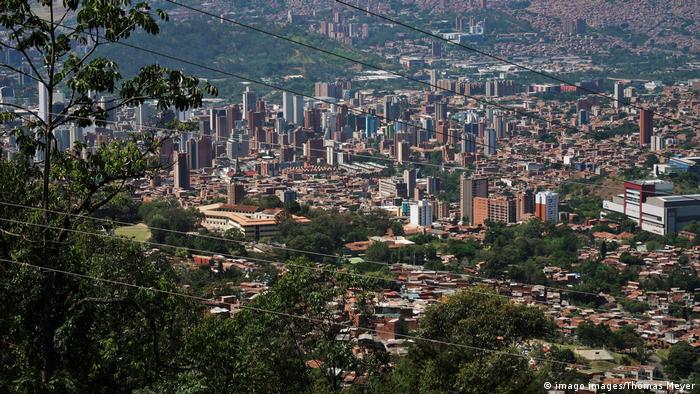 View of the city of Rionegro near Medellín in the Colombian province of Antioquia.

What happens to memory in a war zone? Who remembers the victims when one violent conflict follows another? And what about those who turn from victims into perpetrators?

When DW Akademie started its work in Colombia in 2006, these questions began to crystallize in the circuit of victims' organizations, human rights defenders and academics, and became the subject of public debate.

Initial journalistic trainings with young citizen journalists from community media outlets made it clear that reporting or even talking about the conflict was a very delicate issue. Some of them came from recently pacified warzones. The question arose: how can you understand the political logic of the present if you are unable to review the past?

In 2014, DW Akademie began to work with a group of journalists and academics at Universidad de Antioquia in Medellín, the country’s second-largest public university. In the following year, this group constituted itself formally as "Hacemos Memoria" ("We Make Memory"). Directed by journalism professor Patricia Nieto and with the support of DW Akademie, "Hacemos Memoria" decided that it was time for journalists not only to write about the sufferings of the victims but also to help the eyewitnesses of the different conflicts to write down their own experiences. The journalist's interest was not merely theoretical, as journalists in Colombia have been victimized in many ways themselves, and many were traumatized as war reporters. Even the university campus where "Hacemos Memoria" was established had become part of the warzone, and teachers and students were killed. Clearly, in the middle of such a polarized society, constructing some kind of consensus about the past would be no easy task.

Not only was the city of Medellín hit hard by armed violence, but also most of the rural communities surrounding the city. "Hacemos Memoria" went into zones where the conflict had already ended and organized training programs for local victim organizations and community media. Instructed by professional journalists, these rural working groups, composed of community journalists, social workers, village poets and youth activists discussed the violent history of their communities and created narratives about truth and reconciliation. Stories formerly untold were broadcast by community radio and TV stations. Each of these training programs lasted between two and three years. In some cases however, the efforts had to be abandoned due to security concerns. Within a short time, the course began attracting not only journalists but also other professionals from a wide range of fields, such as psychologists, sociologists and public administration clerks.

Talking about Colombia's bitter past has become somewhat more normal. But the task is still enormous. Over 9 million people have been officially registered as victims of the armed conflict. And their stories are still waiting to be told.

Media and conflict: Late hugs from the neighbors

How a film project reunited a village in Colombia.