"Garlic and onions can help against the corona virus" is just one of many false claims circulating in Guatemala. Radio Sónica has developed a campaign that fights disinformation aimed at youth. 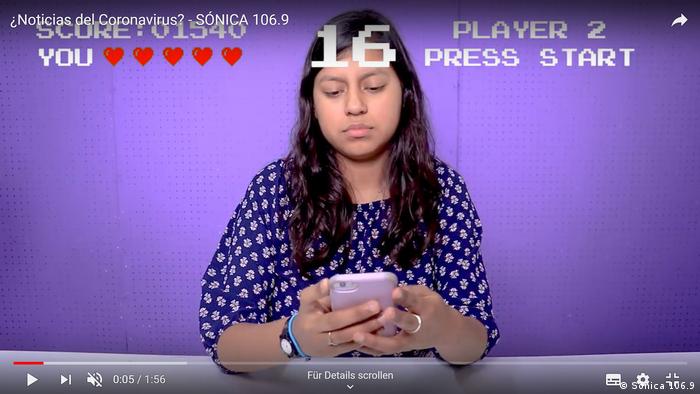 Radio presenter Melu in one of Radio Sónica's videos

The message on her smartphone appears alarming: "People have escaped from quarantine and are being sought! They refused to be treated!" Melani "Melu" Coyoyoy, a Radio Sónica presenter, is shocked - and shares the news with others.

This is the first of several recent social media videos put out by Radio Sónica in Guatemala. The message is, in fact, fake news, and Melu should have first checked it before passing it on.

The short videos are part of a campaign against disinformation around the coronavirus and the design is similar to that of computer games. In fact, Melu has just lost "points" in the "game" because she shared fake news without checking it first. If she continues to do this, her character will not advance to another level or perhaps even "die". The overstated presentation style is intended to make it clear that this isn't funny: false information can be life-threatening in a pandemic.

Confusing and unsettling situation in Guatemala

According to the Global Health Security Index, Guatemala is one of the countries least prepared for the pandemic. It has one of the weakest health systems in Latin America and lacks the hospitals or respiratory equipment to treat those affected.

Extreme poverty is exacerbating the situation: with half of the population undernourished, not only the elderly are at risk of contracting the virus but so are the children and young people. In addition, pre-existing respiratory problems are widespread because millions of people still cook on open fires.

While the Guatemalan government claims to have the situation "under control" it is not providing clear figures on corona test results, infected persons or deaths. Instead, it has launched the mobile app "Alerta Guate" to inform people about the official corona figures and health care assistance. However, digital security experts are warning about the app's terms of use: it is allowed to store users' personal data for ten years and has constant access to users' locations, microphones, cameras, social media accounts, age, and personal interests.

In touch with young media users during the crisis

The state has also put in a curfew from 4 pm to 4 am local time and which affects approximately one and a half million young people. They are confronted with extensive false reports online, and rumors and speculations about the treatment of the coronavirus abound in social networks.

Sónica, which started out as a radio station and now sees itself as a multimedia youth medium, is fighting back with media and information literacy (MIL). In creative videos, radio shows and WhatsApp audios, radio producers explain to their young audience how to recognize false reports as well as sources to question. "Think first, then share" is the motto. 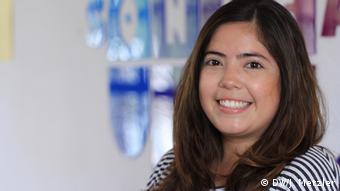 Sara Martínez, member of the Sónica editorial board

"We chose this video format because it's similar to TikTok videos," says Sara Martínez of the Sónica editorial board, explaining why they used video game aesthetics for their information campaign. "The challenge is to make these productions not just entertaining but informative as well," she says.

In addition to producing videos, Sónica is experimenting with "joint fact-checking" with their audience, through live broadcasts, stories on Facebook and Instagram and Facebook groups . "Young people receive huge amounts of information via various digital media and social networks, so it's important that they develop critical thinking," says presenter Melu. "We want our audience to start fighting false information themselves," she points out. 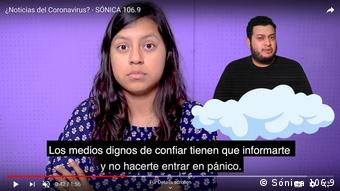 In addition to hosting Radio Sónica shows, Melu and Mike currently play the main characters in videos on misinformation about the coronavirus

Melu's fellow presenter, José Miguel "Mike" Méndez, is the other main character in the videos. "We also help the audience not to get carried away by their emotions because this can quickly happen in a situation like this," Mike explains. That's why Radio Sónica's team also gives tips on how young people can better deal with their fears during the corona pandemic.

Edgar Zamora from Radio Sónica's editorial board is one of the founders and reports that official bodies are not coping with all the uncertainty. "The government isn't communicating effectively or in a way that people can understand," he says. "The information circulating in the mass media and social media is designed to manipulate the emotions of Guatemalans with information that causes fear, anger, and confusion," he maintains. 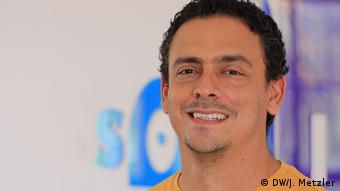 "The government isn't communicating effectively or in a way that people can understand," says Edgar Zamora

Another challenge is Guatemala's linguistic diversity and is why Sónica also packages information about the virus in short podcasts that can be played on the radio and distributed via the messaging service, WhatsApp. "Our partner stations then translate the short audio clips into indigenous Mayan languages," explains Mártinez.

The current situation is also a burden for the Radio Sónica team. "We're working from home and so our editorial meetings take place online but we're also in constant contact via WhatsApp," says Zamora. Only the radio hosts are still going to the station but with the curfew, they can only stay until 3 pm and only show up for their own programs. They conduct their interviews by telephone. Videos are now only shot in teams of two – with both members standing at least two meters apart. They send the raw material to the editing team, which in turn works from home.

Sónica is an alternative, multimedia medium in Guatemala City and that has received DW Akademie support since being founded in 2015. It belongs to the Asociación de Servicios Educativos y Culturales (ASEC). Sónica addresses a target group largely neglected by other Guatemalan media: adolescents and young adults under the age of 30.

The hosts talk to their young listeners about topics like friendship and first love but also address taboo issues such as domestic violence, homosexuality, and HIV. Young people can contact program makers directly via WhatsApp, ask them questions and take part in discussions.

Since the beginning of 2020, all of its activities have focused on media and information literacy (MIL), and Radio Sónica is now bringing MIL into the schools. As a pioneer in this field, Sónica is now also gaining attention in the neighboring countries of Mexico, El Salvador and Honduras.

MIL Campus: A month of media literacy in Central America

Media and information literacy is still a largely unknown concept in Central America. DW Akademie is changing that with a month-long MIL Campus throughout the region. (30.10.2019)