Radio Sónica is broadcasting programs for young people living in disadvantaged areas of Guatemala City. With the help of a mobile studio, the station broadcasts directly from the districts where their listeners live. 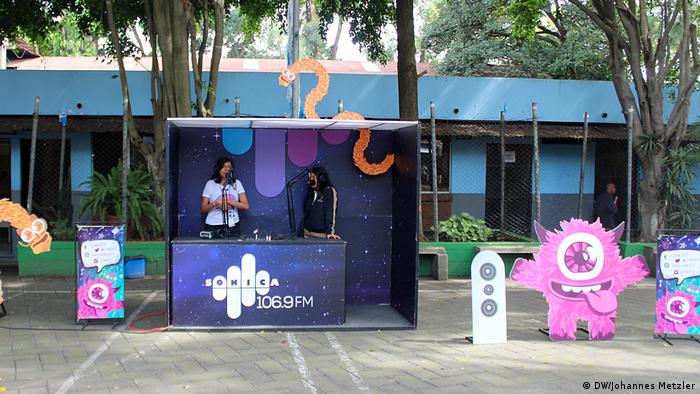 On the road with the space studio

Still wearing her school uniform, Alejandra steps out of one of the dirty red city buses at a roundabout in the middle of a quiet residential area. The bus drives away leaving a thick, black cloud of diesel fumes in its wake as she walks up to a multi-story building at the end of the street. Her destination is the Guatemalan Institute for Radio Education (IGER) and the studios of one of its most popular projects, Radio Sónica.

"I still cannot believe it," said the smiling 21-year-old. "In the morning I'm going to school and in the afternoon I'm a radio presenter."

Alejandra had stopped going to school at the age of 13 after her parents told her they could not afford it. They said that she was just going to get pregnant so they forced her to stay home and help her mother around the house. The broadcaster has given her a future she thought she had lost.

"I was always curious and I enjoyed to learn," she said.

Alejandra sits with a laptop in the editorial room. It has a long table with colorful bean bags in the corner. Beside her sits Mike, looking relaxed as he just finished his show. He is in his early 20s and is wearing a black sweater and a winning smile. He is also the only male host for Radio Sónica. 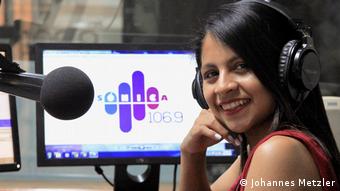 On Air: Radio Sónica has given Alejandra back her future

Such a female majority is not common for the media sector in Central America where men traditionally call the shots. Sitting opposite them is Sara, the community manager. She is editing a video that will be posted later on Facebook. Radio Sónica is more than just a radio station as their content is conceived and produced for both radio and social media.

Beside them on the wall, colorful index cards have been posted. Written on them are the main topics that the team has decided to cover: domestic violence, drugs, teenage pregnancy. These issues reflect the pressing problems many young people in Guatemala face, problems that have been documented in studies including the Save the Children's End-of-Childhood Survey.

According to Sara, the situation for young people is worse in Guatemala than in any other country in Latin America. Many young Guatemalans never experience a real childhood as they are forced to work at a young age or suffer abuse and hunger.

Alejandra spent much of her life in one of the city's many slums, as have many of her listeners. They consist of densely packed houses built with unpainted gray concrete blocks. Such settlements are largely constructed illegally under bridges or on hillsides. During heavy rainfalls, whole neighborhoods have been destroyed by mud slides. In these areas, hope is almost as hard to come by as a job.

These slums are run by the Pandillas, youth gangs who earn their money through racketeering, drugs, and contract killings. Alejandra was only 13 when she joined a gang. "I was angry because my parents did not want me to go to school anymore," she said. "They were like my second family."

Alejandra's story is a familiar one. But what makes it unusual is the fact that it can be heard on the radio in a language and manner other young people can understand and identify with. Radio Sónica is the only broadcaster in Guatemala City targeting disadvantaged young people while inviting them to be involved in the program. This is a tremendous achievement as these young people have no other medium to turn to.

Young people also have no place where they can go and feel safe. Their neighborhoods are ruled by gangs and they are regularly chased from local shopping malls by heavily armed security guards. As a result, the media paints them mostly as criminals. Commercial broadcasters target more affluent audiences who appeal to their advertising base.

Alejandra’s story – and the stories of her contemporaries in the slum – is not one that is of interest to the national media. It is the story of a girl who left home at 16 and got a job as a saleswoman in the market.
"It was hard. I had to work from morning to night and got paid almost nothing for it," she said.

Even for a radio station geared for the youth, these challenging realities makes it difficult for Radio Sónica to reach its target audience. For example, if Sónica gives away movie tickets, many of the winners will not show up. Many simply do not have enough money to pay for the bus ride there or cannot leave their houses at night because of the threat of gang violence. Guatemala is not a country where children can even go to piano lessons in the afternoon or take a quick trip to the station.

"That's why we decided that if our listeners cannot come to us, then we'll just go to them," said Radio Director Cristian Galicia.

Their solution was to design a mobile studio that could broadcast live from anywhere in the city. The result was a "space studio," a colorful box painted with snakes and aliens that could "land" in the middle of schoolyards. The project was developed in cooperation with the Catholic school "Fe y Alegría" which works in these disadvantaged areas, making access to these areas possible. Parks or other public locations are unfortunately not safe enough in the city. 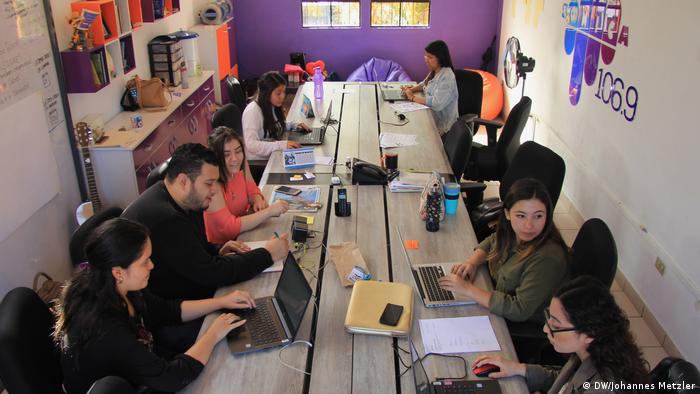 The studio is an instrument for bringing young people and the issues they face onto radio. It is also designed to introduce them to digital media tools while teaching them how to competently navigate the media landscape. Its deployment has made Radio Sónica, IGER, and its umbrella organization, Asociación de Servicios Educativos y Culturales (ASEC), pioneers in the area of youth media in Central America. DW Akademie experts assisted in the development and deployment of the space studio.

The team has also designed games to help young people learn what dangers can lurk on the Internet and how, for example, they can distinguish real facts from hoaxes on social media. Sónica also distributes comics on these topic and trains teachers. Through school visits alone, Sónica reached over 2,500 young people in 2017 and 2018. The project takes on the escalating violence in Guatemala City by educating young people who can confidently raise their voices, make their issues heard, and stand up to drugs and violence.

In the coming years, Radio Sónica intends to expand its activities and reach more young people across the country through the IGER school program. The IGER school project allows Alejandra to study in the mornings and work at Radio Sónica in the afternoons. Her parents are proud of the work she is doing on the radio and realized that it was a mistake to take her out of school. She hopes her story will encourage others.
"At Radio Sónica, I've learned things that I never even knew existed," she said. "It’s where I have been allowed to blossom into the person I am today."

The Author: Johannes Metzler worked for the DW Acadamie in Guatemala for several years and contributed many ideas to Radio Sónica. He knows the region well. As a journalist he reported on poverty and violence in Latin America. Responsible for Central America, Mexico and the Caribbean, he is now developing new projects for freedom of expression in the region. 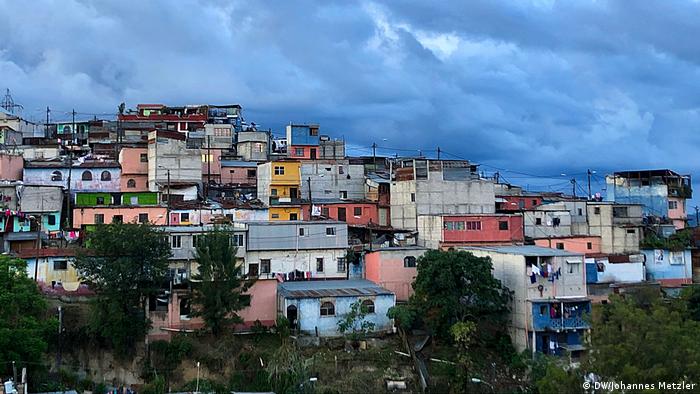 Radio Sónica also goes to dangerous parts of the city

What has the media project achieved?