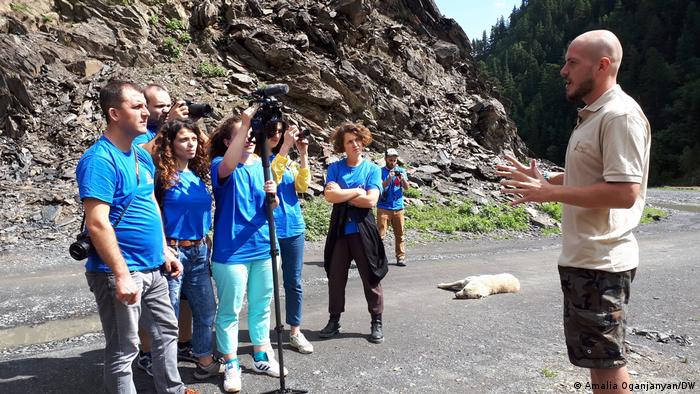 Television is the most widely used information source in almost all regions of Georgia. Most local stations, however, are currently facing major problems in terms of financing and quality content. Broadcasters also know little about their viewers' interests and as a result find it difficult to retain viewers.

Ensuring the quality and viability of local media

To provide various population groups with relevant, quality information, DW Akademie is working with a number of local Georgian stations to improve audience retention and the quality of reports.

Through audience surveys and discussions with editors and the public, stations are learning more about their viewers' interests and concerns and taking them into account when developing programs. Through training, consulting and an upcoming media e-school, DW Akademie is also strengthening local broadcasters in the areas of management and marketing, and in developing viable business models.

Ethnic and religious conflicts are rife in the South Caucus, with minorities facing widespread public prejudices fueled by national media. The resulting isolation of minorities – especially in rural areas – leads to a lack of prospects and at times to radicalization. This in turn appears to confirm existing stereotypes.

Georgia also has a huge urban-rural divide. The concerns of the rural population and the country's ethnic, religious and linguistic minorities are largely ignored by the media and as a result, much of Georgia's population is underrepresented or portrayed as stereotypes.

Community media as a mouthpiece for the rural population

DW Akademie is working with various community media with a goal to focus on issues important to minority groups. Community media can this way offer better prospects and counter radicalization and conflicts. Independent, well-connected and trained journalists can offer minorities and rural population groups opportunities to access relevant information, and for communities to present themselves to the outside world and dispel long ingrained stereotypes.

Creating networks and improving the quality of community journalism offer Georgia's rural population and minorities the opportunity to have their voices heard and claim their fundamental right to freedom of information.

Corona myths and propaganda: Fact-checking is a civic duty

False information spreads quickly, and not just in a pandemic or ahead of an election. In Georgia, DW Akademie trained young people in fact-checking.

Good journalism must be paid for. In a management course at the Caucasus Media E-School, media professionals can learn to develop sustainable business models and how to think like an entrepreneur. (08.07.2020)

In Georgia, local TV stations are conducting audience surveys with an app and using the results to redesign their programs. (22.04.2020)

In a remote mountain region in Georgia DW Akadmie is training young people as citizen journalists. The Pankisi Valley is a notorious recruiting area for Islamists but DW Akademie is opening new perspectives for youth. (21.04.2020)