"We give people a voice that would otherwise be overheard"

In Georgia, DW Akademie supports the online portal "mtisambebi.ge". Citizen journalists publish their stories here – even from far away regions that are rarely noticed by the press. 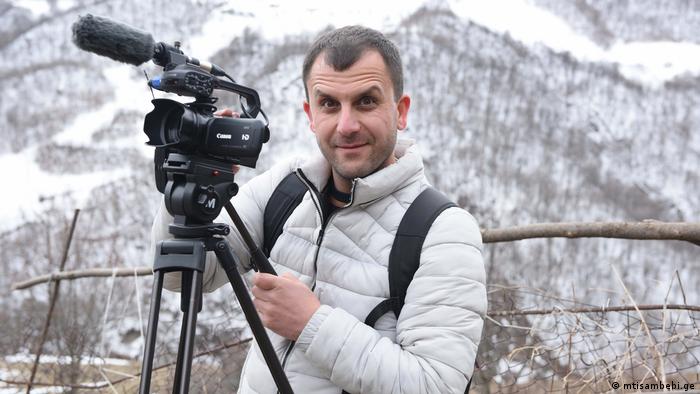 Gela Mtivlishvili often travels with his camera to far away mountain regions to tell the stories of people who would otherwise have no contact with the media.

Georgian Gela Mtivlishvili - reporter, founder and head of a community media organization, human rights activist and lawyer - is not afraid of challenges. He lives and works in the Kakheti region in eastern Georgia. The economically underdeveloped part of the country on the border with the Russian Federation is rarely noticed by major media companies. Mtivlishvili finds this unacceptable.

The journalist is managing editor of the citizen's website mtisambebi.ge, which DW Akademie has supported since the beginning of 2017. Citizen journalists publish their stories from six different regions in eastern and western Georgia. 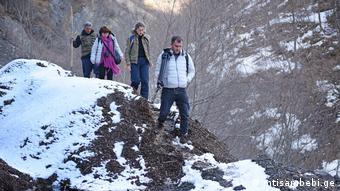 Most employees of mtisambebi.ge are closely connected with the mountain region and familiar with the conditions of this landscape.

This is what he tells DW Akademie about his work:

"I am Gela Mtivlishvili and I work in Georgia, mainly in inaccessible mountainous regions. Together with my team, I work on several media products: the internet magazines mtisambebi.ge and reginfo.ge, and the citizens' radio station WAY, in the Pankisi region, which is mainly inhabited by the Chechen minority. With these media, we give people a voice that would normally be ignored.

I know this feeling all too well. In my work as a journalist I have often been under pressure myself. Because of my background in law, I am aware of – and enforce – my own rights. So my example shows that you can fight and stand up to pressure from above. We would also like to pass on this experience in our broadcasts and articles. We believe that the media should become a real partner for citizens and in return, citizens should support the media. This is the only way we can achieve something together, and we do everything to promote cooperation through our citizen media. 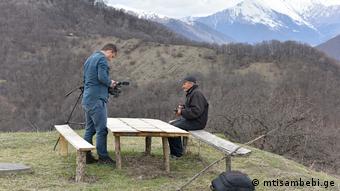 Gela Mtivlishvili is interested in all the stories people have to tell.

"What happens in the mountains touches our hearts"

My last name means I'm from the mountains – just like my employees at mtisambebi.ge, who are almost all connected to the mountain regions. What happens there touches our hearts. Nobody else cares about the problems there. We started to report on the region to change and improve the situation for the people there.

In the mountainous regions of Georgia, people live at an altitude of over 2,000 meters. As soon as the first snow falls, they are cut off from the outside world for about six to seven months a year. During this time, the population has no access to cities or even to neighboring communities. Even though we live in the 21st century, these regions often have no electricity; telephone networks and internet do not work. People dream of 12 volt television sets so they can get at least a bit of information. Our aim is to talk about these people's problems, the isolated places and villages, and to spread information within the regions. But we also want to raise national and international awareness of their problems to address and solve them.

"All the media together can improve the difficult situation in life"

When mtisambebi.ge publishes articles, they are often picked up by national media in Georgia and published nationwide. Media can thus help improve the difficult living situation in the forgotten mountainous regions.

With the help of DW Akademie, mtisambebi.ge has started training citizen journalists in Georgia for the first time. This is a unique project in the country because there are plenty of exciting stories in the mountains to be told. But the people who live there lack the technology and skills to write professional journalistic articles. During the courses we show them how they can tell their stories using simple methods, for example: using their phones and mobile internet. They send us the video clips they produce so that we can publish them on mtisambebi.ge and draw more attention to their problems.

The people in the mountainous regions now know us and speak openly to us. They are mostly interested in education and healthcare. In many villages there is no school, no electricity and no water. There is usually a shortage of doctors and healthcare workers. We at mtisambebi.ge are committed to improving this situation. Making things happen creates trust and a basis for more exciting stories. Irakli Khvedaguridze (76) is the only doctor for all inhabitants of the mountain villages. In winter he gets around on selfmade snowshoes.

Only one doctor for many villages – and he's out on snowshoes

One of the most exciting stories I have encountered took place in the Tusheti region. There are 52 villages there, which often lie over 2,500 meters above sea level and are usually only habitable in the summer. To the north, Tushetia borders on Dagestan, part of the Russian Federation, which repeatedly tries to take over uninhabited areas. This makes it all the more important to maintain a presence in the border regions. But if people are to stay there, they need electricity, water and medical care.

In Tusheti, many villages are ten to 30 kilometers apart. Inhabitants are all treated by one doctor, Irakli Khvedaguridze. He's 76 years old. In the winter, there are over two meters of snow, and no vehicle can drive through the area. One winter, when we traveled to the region by helicopter, we saw how Irakli gets from one patient to another: using DIY-snowshoes. He needs to reach emergency situations on time, so he made himself snowshoes (he calls them "snow paws") out of wood and plastic scraps and he also made poles that do not sink into the snow.

He walked all day with the snowshoes to reach his patients in the villages. After we published the article about Irakli on mtisambebi.ge, we were contacted by a reader from Germany who gave the doctor real snowshoes and ski poles to make it easier for him to get around."

The focus of DW Akademie's work in Georgia is to develop sustainable, legally binding media laws. (07.07.2015)

DW Akademie supports the website "mtisambebi.ge" in Georgia. Citizen journalists publish their stories there – even people from remote regions who rarely get press attention. (10.01.2018)