Finding chickens in a helicopter in Khevsureti with mtisambebi.ge | Europe/Central Asia | DW | 10.01.2018

DW Akademie supports the website "mtisambebi.ge" in Georgia. Citizen journalists publish their stories there – even people from remote regions who rarely get press attention. 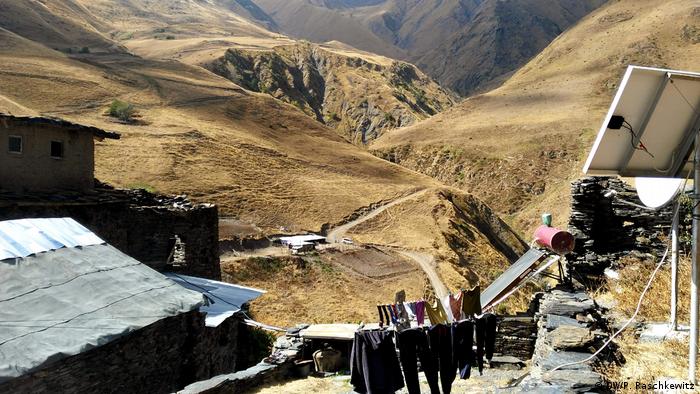 On the way to the Khevsureti region in northeastern Georgia, on the border with Chechnya, the first stop for the managing editor Gela and journalist Giorgi is the boarding school in the village of Shatili. It is located in a small slate building. The stove, which is being used to cook dinner, serves as the heating system.

Only a handful of students attend the school. Seven of them spend the entire winter there. The cook is not allowed to spend more than a euro a day on their meals. Shrugging her shoulders, the principal says, "We're trying to make ends meet." What are the other alternatives? "Some families live 20 kilometers away from here; they can't make it when the snow is four meters high. If we close, the children would have to stay at home. No family can afford a boarding school in the capital." When the first snow falls in mid-October, the region is often cut off from the outside world for seven to eight months. 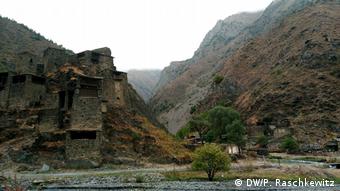 The village of Shatili is built around a medieval mansion

Stories from places like Shatili are told on mtisambebi. ge. Thanks to this website, people from remote regions make themselves heard. DW Akademie has been supporting the web offering since the beginning of 2017.

Petra Raschkewitz, DW Akademie's country manager for Georgia, accompanies the managing editor Gela Mtivlishvili and the journalist Giorgi on their journey to the village of Shatili. She says, "I am impressed by the defiant perseverance of the Khevsurians. But above all, by the citizen journalists at mtisambebi. ge who know that they are needed and can make a difference with their work."

Only 48 people are permanent residents of Shatili. In winter it normal for many people from the mountains leave their farms to go down to the valley. Sometimes the power supply is operational in Shatili, where there is a doctor and a school.

While still in the village, Gela and Georgi run a crowdfunding campaign for the school on mtisambebi. ge. In two weeks' time, they will be driving here for the last time before the onset of winter, bringing food, medicine and teaching materials. Eleven-year-old Keto knows exactly what she wants: "a pony!" Her older classmates are more modest. "A few books would be nice," says fifteen-year-old Dato quietly. The actual school building, a new timber construction, stands out. After a fire, a German tourist funded the new school, built in the style of an alpine hut. A traditional stove with an open fire is unthinkable in the wooden building, which is why the new school was equipped with an electric heating system. Unfortunately, it rarely works in winter. 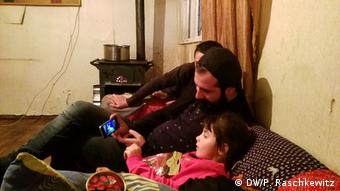 Keto is watching the video on her smartphone

A doctor in camouflage suits and sneakers

On the second day of the trip, the group meets Micha, who is the village doctor and a border patrol guard. The Russian Federation is only 400 meters further up. Sometimes there are attacks; Micha and the other volunteers try to deescalate. Micha received a satellite phone from the government for this reason. If there's a medical emergency, he can use it to request a helicopter. But you need to find Micha first.

Marina's farm is located 30 km away from the village, in the middle of nowhere at 2,000 meters above sea level. There are no neighbors, no telephones and no farmland. A few skinny chickens cackle around a helicopter wreck. A Russian helicopter crashed over Georgian territory some time ago. Marina and her husband salvaged the front part and converted it into a chicken coop. 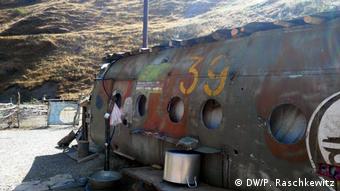 The family lives off livestock, cheese and smoked meat in the winter. Marina was all alone when she had her baby. Her husband on the road in the mountains; Micha and his satellite phone were too far away. So Marina gave birth to her child without help. The mother and the infant survived, but they too will leave the farm and move in with relatives in Shatili until spring.

Shortly before they leave, the group stops there again. Once again, the village has no electricity. No one can be seen in the power station; the door is open. Graffiti saying "This is the disgrace of Shatili" is sprayed on it.

Gela and Giorgi interview the neighbors. The provincial administration has let repairs slide. The person who is responsible lives in Tbilisi, far away from their worries. The journalists publish a report online. Before their return to Tbilisi, the local politician answers Gela's cell phone. He asks about the bad press and says he will take care of the repairs immediately. Gela will continue to pursue this matter. Should the politician keep his word, this will also be published on mtisambebi.ge.