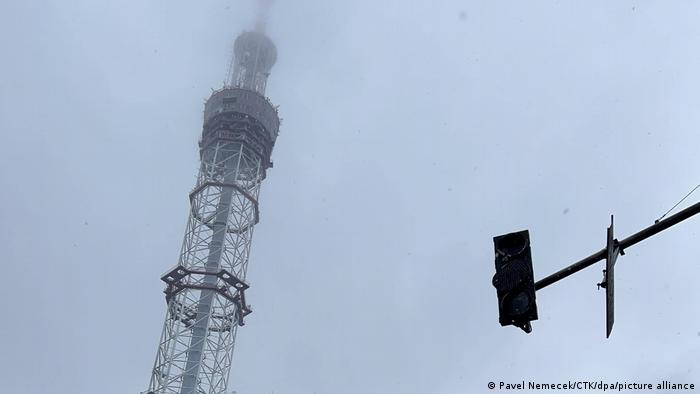 DW Akademie: Dima, how are you reacting emotionally to the crisis?

Dima Khilchenko: To be honest, I'm losing track of time. It feels like it's been months because time is going so slowly. I wake up every night at four a.m., check the news, and then check it again at six. I’m sad because my city's under attack, I'm angry because the Russian army is killing children and bombing kindergartens and schools, and I feel helpless, wishing I could do much more than I am. That said, I'm still confident that we’ll win, and I am certain that neither I nor any other Ukrainian will surrender or give up our land, because this is our home.

You're supporting Ukrainian and foreign journalists in reporting on the war. UA:PBC, your country's public broadcaster and our partner, is still operating. How is that possible given the crisis?

UA:PBC had to move its main operations from Kyiv, the capital, to Lviv, in western Ukraine, and is now broadcasting the national news from there. One hundred and twenty newsroom members and their families have fled here from Kyiv. Despite the fighting in many parts of the country, most of UA:PBC's 23 regional offices throughout Ukraine are still reporting from the ground. And they still have people in Kyiv producing news. It’s very complicated, of course. It's a mess.

How was UA:PBC able to immediately produce content from Lviv? Was there already a studio?

We had only had a small office when we got there, so we had to start from scratch and even take down walls coverings so we could put new cables through. We now also have a second studio in an underground bunker. TV towers in other cities have been attacked, so we needed a backup studio that's safe and fully functional. A missile alarm went off a couple of days ago while we were broadcasting, so the team put a video on loop and moved to the bunker. The anchors presented from there for an hour until the alarm stopped.

How important is UA:PBC now for Ukrainians?

Everyone in the newsroom now knows that UA:PBC’s role as a public broadcaster goes beyond providing trustworthy, unbiased and balanced information – it's saving lives as well. In Kharkiv, for example, we still have journalists on the ground, despite ongoing attacks and bombings. The missile alarm system there was destroyed in one of the attacks. Authorities are now calling us to provide information about potential attacks and we transmit the information as push notifications on the messenger platforms Telegram and Viber. We added more than 100,000 subscribers in one or two days – all people UA:PBC helps keep alive.

How do you and the newsroom team manage to differentiate between false information and trustworthy sources?

There are reports and videos everywhere and verification is extremely important. The verification methods have not changed, but the sheer amount of the content is overwhelming, it takes more effort now. We always check the geographical position and meta-data of every video or picture we get. Our content is mostly provided by our correspondents on the ground and their network. The correspondents also rely on user generated content from sources they trust, so we can trust them as well. Of course, sometimes it happens that a certain type of information is found out to be wrong. Then we apologize, give an update and then take it down. But in this case, everyone understands that sometimes it's better to take a risk and get the information out fast because it could save lives.

“Support to the National Broadcaster of Ukraine”