Bombs and targeted disinformation: The war in Ukraine threatens everyone. Reliable information and media resilience are essential to survival. 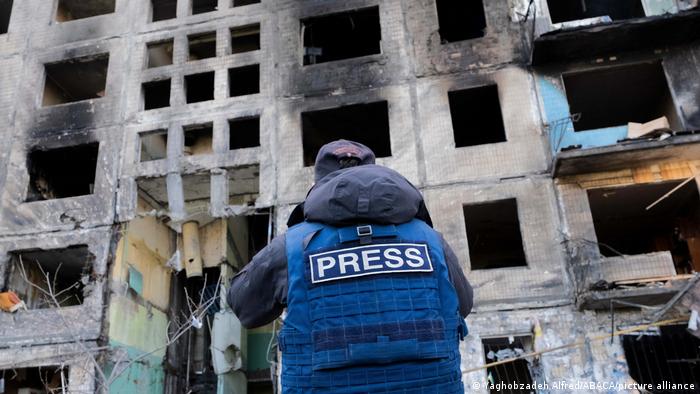 DW Akademie’s Ukraine team actually had a plan for 2022: training more multimedia journalists; methodical and didactic support for the journalism departments at the universities in Zaporizhzhia and Lviv; trainings to enhance media competence. But then the war started, and with that, all plans were shattered. In Ukraine, it’s now all about survival.

DW Akademie’s partner organizations have meanwhile left the areas of fighting and now work in western Ukraine. DW Akademie keeps close contact with them; their safety is of highest priority.

DW Akademie’s Ukraine team are aligning their media development projects with the country’s current situation. Even before the war, media resilience was a goal in eastern and southern Ukraine, strengthening it in terms of economic crises and disinformation campaigns. This goal is now all the more urgent. Reliable information is critical to the survival of both Ukrainians who choose to stay in their country as well as those who choose to leave.

"Working conditions for journalists in Ukraine were already precarious due to the Covid pandemic and structural change within the media sector," said Helène Champagne, said Helène Champagne who is responsible for the “Media Fit”-project, which is financed by the EU and supported by the Federal Ministry for Economic Cooperation and Development (BMZ). "Since February 24, the focus is on the survival of media pluralism." The EU project was initially aimed at southern and eastern Ukraine and was focused on the economic aspects of media and innovation. "Media Fit" is now concentrated on emergency support for independent local media in wartime.

A new "Media Fit" newsletter includes information on aid for Ukrainian journalists in the country and in exile in neighboring countries. Moreover, DW Akademie, with funding from the EU within the project’s framework, is directly financially supporting up to 15 independent regional media.

Journalist training with a new scope

In addition to emergency relief, DW Akademie is preparing more projects to help journalists cover the war. The war has presented enormous new challenges for them: They are reporting in areas of fighting, often under bombardment themselves. They are documenting possible war crimes and are rebuilding editorial teams in western Ukraine.

With the support of the Federal Ministry for Economic Cooperation and Development (BMZ), DW Akademie is focusing its trainings on the physical, digital, legal and psychological security aspects of the journalism profession.

A new target group is, as well, producers who are working with colleagues from foreign media outlets which have correspondents covering the war. Their work is extremely important: They are helping with local knowledge, translation and technical know-how so that the world can know what is happening in Ukraine. Since among them are many who entered the profession from other careers, DW Akademise is supporting them with training in journalism basics and security.

Not losing sight of the future

An additional goal of DW Akademie is to strengthen journalists toward sustainability.

"Ukrainians need more than depressing news and horrible photos of the war," said Dr. Kyryl Savin, Program Director Ukraine for DW Akademie. "They need news analysis and coverage and stories that look forward to the future." For, when the war ends, independent news will be needed for the reconstruction efforts in former war zones. DW Akademie will therfore, together with its Ukrainian partners continue with long-term investment in journalism training in Ukraine.