Right or left, with nothing in between

How fake news has contributed to political polarization in Brazil. By Philipp Lichterbeck 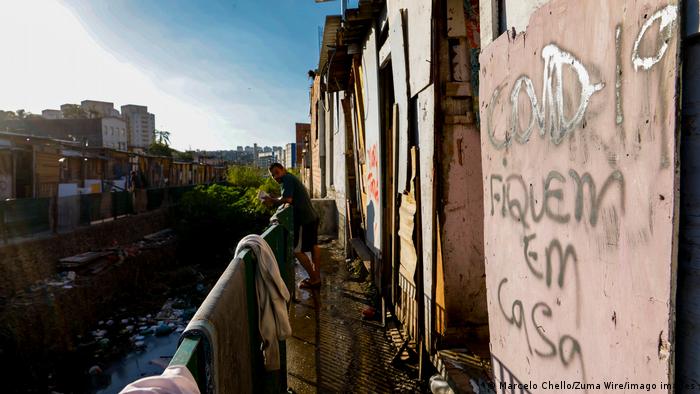 Even in favelas like this one in São Paulo, President Bolsanaro finds followers.

In the middle of the coronavirus crisis, my friend Carolina A. sent me a message on WhatsApp: "Citizens being beaten. No one can go out on the streets anymore. Persecution. Prison." Carolina A. had read the text on the Facebook profile of a follower of Brazilian President Jair Bolsonaro. The 41-year-old, who does not want her full name to be published, decided to forward it. When asked, she says she believed that it was true. "The coronavirus crisis is being misused for political ends," she states. The governors of Brazil have imposed "dictatorial" quarantine measures and are harassing citizens and destroying the economy. But their real goal, she says, is to hurt President Bolsonaro.

Carolina A. is one of almost 58 million Brazilians who voted for Bolsonaro in the 2018 elections. So far, she has not regretted her vote. "Bolsonaro was elected to end the rampant corruption," she says. But he is under constant fire from the old elites, the left and the media. The arrival of coronavirus — the risk from which she thinks is being exaggerated — is a welcome opportunity for her to help sow chaos.

Carolina A. gets her information primarily from right-wing Facebook profiles. There, texts, memes and videos are shared in which the president is seen as Brazil’s savior, while his opponents are portrayed as cunning "communists." It is a mix of facts, half-truths, conspiracy theories, defamation and lies. Carolina A. hardly uses the traditional media, i.e. newspapers, television and radio. She says that they suppress the truth and distort reality. As "evidence," she cites right-wing news sites with names like “Renova Mídia” (Renew the media), "Jornal da Cidade" (Newspaper of the City). They claim, for example, that Adélio Bispo, who attacked Jair Bolsonaro with a knife in 2018, had connections with the left-wing MP Jean Wyllys. For Carolina A., it is therefore clear that the attack was a conspiracy. "But the normal media doesn't report it," she says. "They’re suppressing the truth." But in fact, according to Brazil’s federal police, there is nothing to suggest a connection between Bispo and Wyllys.

About 30 percent of Brazilians support Jair Bolsonaro unconditionally. It doesn't matter to them whether he insults gay people or plays down Covid-19 as a "little flu." Carolina A. also fervently supports him, because she believes he is the only politician who is not corrupt. And yet she is a rather atypical Bolsonaro supporter. The two are worlds apart. Bolsonaro built his political career on insulting gay people, Black people, women and the poor, and glorifying the military dictatorship that ruled Brazil between 1964 and 1985. Carolina A. is a Black woman and single mother from the poor periphery of Rio de Janeiro, who earns her living as a real estate agent. But she shares Bolsonaro’s conservative agenda, such as the ban on abortion and his call for tougher punishment of criminals.

A deep rift runs through Brazil. People are either for or against Bolsonaro — there is nothing in between. On the opposite side of the political spectrum to Carolina A. is Lanna Carmo. The 30-year-old lawyer from Rio de Janeiro thinks Jair Bolsonaro is shameless and stupid. She is ashamed of his presidency, and thinks he is endangering Brazil’s democracy.

Carmo’s main source of information is Twitter, because that's where a lot of information first appears, she says. She follows more than 500 accounts, including journalists, newspapers and bloggers, but also constitutional judges and left-wing politicians. "I’d follow Bolsonaro to keep up, too," she says. "But his tweets make me furious."

The most important weapon in the war of information is, hardly surprisingly, social media. WhatsApp plays the biggest role in this, followed by television, YouTube and Facebook. The enormous importance of WhatsApp for public discourse first became clear during the 2018 elections. Both presidential candidates, Fernando Haddad and Jair Bolsonaro, had masses of election advertising sent out via the app during their campaigns. However, it was the Bolsonaro camp that massively expanded this form of advertising — and in so doing also violated Brazil’s electoral laws. Private campaign financing is prohibited in Brazil, yet several entrepreneurs paid for the sending of millions of pro-Bolsonaro messages. Most of the messages were lies, half-truths or taken out of context. Brazil’s congress therefore launched an inquiry at the end of 2019. An interim report stated that fake news "certainly influenced voters in their voting decision."

Today, fake news is part of everyday life in the political debate in Brazil. It comes from the most diverse sources. It's private individuals who receive and share the videos, photos, audios and texts on YouTube, Facebook and Twitter or via WhatsApp. But it’s often professional bloggers and influencers, right- and left-wing news sites, politicians, celebrities and journalists who invent and publish fake news or rumors.

In most cases, fake news is aimed at a target group that is receptive to the news in question. Lanna Carmo, for example, would never believe that the coronavirus is a Chinese plot against the West, but Carolina A. does. However, people with less firm opinions are also susceptible. According to official sources, 85 percent of the inquiries about the coronavirus that Brazil’s health ministry receives from citizens are based on fake news and rumors. Fake news doesn’t just spread quickly, it’s also very difficult to contain and correct once it spreads.

After the elections, the parliamentary investigative committee uncovered the existence of a so-called "hate cabinet," which initiates virtual attacks on political opponents. According to witnesses, it is located directly in the presidential palace. Thousands of trollbots are reportedly used in the attacks, says Bot Sentinel, a platform that searches for robots on Twitter. And the head of the hate cabinet? None other than the president’s son, Carlos Bolsonaro.

Philipp Lichterbeck is a freelance journalist and reporter focusing on Brazil and Latin America.