On recipes and roaming elephants

How Rohingya and Bangladeshis work together on a radio show. By Andrea Marshall 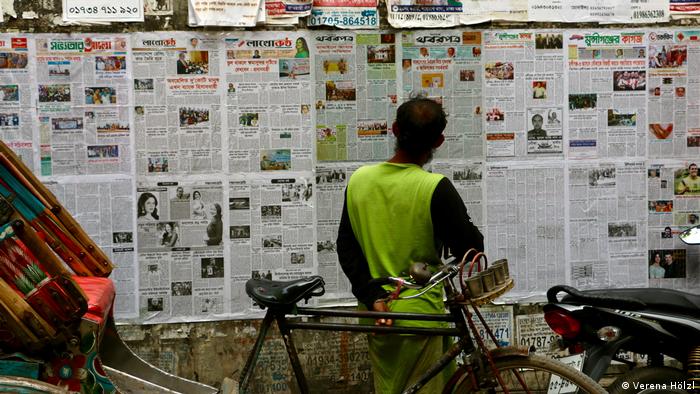 "Palonger Hota," or in English, "The Voice of Palongv is the name of the weekly radio program that DW Akademie’s partners produce and broadcast in the district of Cox’s Bazaar in southwestern Bangladesh. Since the beginning of 2018, it has been broadcast on Radio Naf, the only local community radio station, and is aimed at local Bangladeshis and Rohingya refugees. The refugee camp there is also called Kutupalong after the nearest village — and it is the largest in the world. Around 800,000 Rohingya have arrived there since 2017 after massive persecution in their homeland of Myanmar. Some 300,000 Rohingya were already living in Kutupalong.

In "The Voice of Palong," newly arrived fugitives, old-established refugees and locals report together. In the beginning, the aim was to provide Rohingya with vital information, but now the focus is on dialogue and good neighborly relations. After initially showing great willingness to help their persecuted Muslim brothers and sisters, the mood among people in Bangladesh has turned rather against the Rohingya. But through the program, three population groups remain in contact with each other, which otherwise would have no options for organized exchange. The citizen reporters inform on topics from their everyday life, away from the big political issues which citizen radio stations are not allowed to report on anyway. They report on practical life topics, such as health — especially important during the corona pandemic — or nutrition, for example, on hanging vegetable gardens where healthy crops can be grown even when there is a shortage of space. The program talks about the fight for firewood or protection from cyclones, the exchange of cooking recipes, or dangers from roaming elephants. There are also reports on serious human rights issues, such as human trafficking of Rohingya refugees, domestic violence or child marriage.

Many topics center on things each population has in common, for example, preparations for the great Muslim Eid celebration at the end of Ramadan. Music, poems and short radio plays are an integral part of the program. No other radio program in the region has such a wide range of topics and formats and is aimed at such a mixed audience. The program follows the concept of constructive journalism and positive psychology: problems are to be addressed, but always discussed together with possible solutions. Self-efficacy and encouragement are conveyed, not despair or persistent misfortune.

Radio is the medium of choice, not only because the language is similar, but also because about 70 percent of Rohingya are illiterate. This is especially true for Rohingya women. The fact that Rohingya women also regularly work in the "Palonger Hota" citizen reporter team is particularly gratifying, as they need the permission of their families to work outside the house.

Apart from Radio Naf, only the national radio station, Bangladesh Betar, offers programs for Rohingya. In addition, some aid organizations have audio content produced and broadcast in the camp. Nevertheless, a study by the international NGO Internews in 2019 concluded that the Rohingya still do not have enough information about their rights. It is doubtful that they know much about the situation of their local neighbors, meaning there will likely be a long-term need for the broadcast of "Palonger Hota."

Andrea Marshall is a senior reporter and editor for German radio stations and a trainer for journalists from Asia and Africa.

The threat of the other