Between envy and fear

In Bangladesh, tensions between locals and Rohingya refugees are rising. By Verena Hölzl 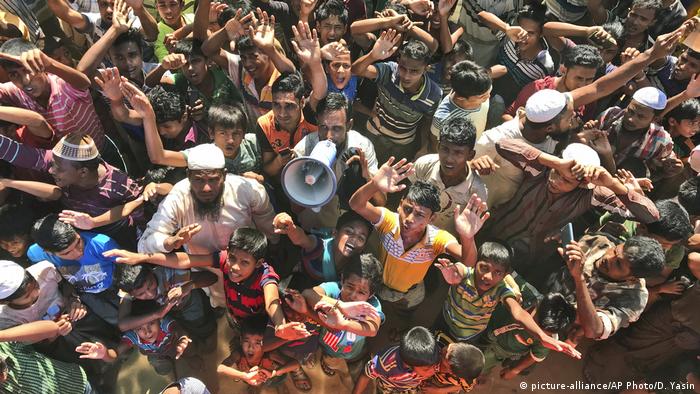 "I was standing in the market and wanted to buy tomatoes," remembers Mohammed, "when this Bangladeshi journalist approached me. I know him, he works for a local online platform. He said, ‘If you don't pay me 5,000 taka, a juicy story about you will soon be on our platform.’" Five thousand taka, the equivalent of about 50 euros, is a lot of money in Bangladesh — and even more so for a refugee. 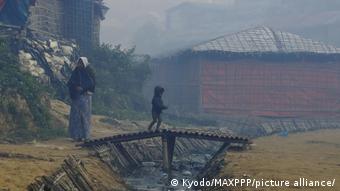 Mohammed, 32, actually has a different name. In 1992 he fled from his homeland Myanmar to neighboring Bangladesh and now works for an NGO in Ukhiya, a small border town. He is one of the few Rohingya with a relatively good income. The Bangladeshi journalist had apparently found out about this and thought he could blackmail Mohammed — after all, Mohammed is a Rohingya refugee, and as such he is not actually allowed to earn money. But the calculation did not work out. Mohammed is well connected in his host country. A phone call from a respected lawyer, a friend of his, was enough to make the journalist reconsider the blackmail.

Mohammed says he knows many refugees who’ve been exposed to blackmail attempts by locals. But unlike him, they don’t all have influential friends. Whether they work as translators, operate tea stalls or sell small items in a kiosk, many are in a position to be blackmailed by locals.

Conflicts between refugees and Bangladeshis are not new. Members of the persecuted Muslim Rohingya minority in Myanmar have been fleeing across the border to Bangladesh for decades. In 2017, Myanmar’s army launched a brutal crackdown on the Rohingya, and within just a few weeks, there were around 800,000 new arrivals in Bangladesh. In the meantime, 34 refugee camps, a sea of bamboo huts and plastic tarpaulins, cover an area the size of a big city. Forests have been cleared and fields filled with makeshift accomodation for refugees. Many Bangladeshis are now afraid of becoming a minority in their own country.

The social fabric has also changed with the arrival of the many refugees. Because the desperate Rohingya accept any kind of work, wages have fallen dramatically. At the same time, prices are rising, triggered by the humanitarian organizations from all over the world who have come to the city of Cox’s Bazaar near the border with Myanmar, to supply the refugees. The better educated local population benefits from the job opportunities offered by the NGOs, but at the same time, the economic situation of many poorer people is worsening. And while the bulky jeeps of development workers have been clogging Ukhiya's roads for almost three years now, many locals in their rickshaw taxis feel they’ve been left behind. Such sentiment has sparked regular protests against the refugees.

Bangladesh is poor and overpopulated. Last year, a government plan to resettle some of the refugees on an uninhabited island 30 kilometers from the mainland caused consternation among international human rights organizations. The government replied that conditions on the island were better than much of what could be offered to its own population. 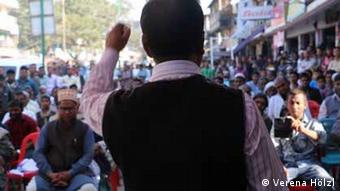 A demonstration against foreigners in Dhaka, Bangladesh

Obaida is also convinced that locals are being disadvantaged. An elderly woman, she lives with two of her children in a small stone house near the refugee camps. She sits on her bed and straightens her headscarf. She has infrequent contact with her other children, who live further away. For several months now, telephone and internet services have only been working sporadically. The government has cut off both in the nearby refugee camp, citing security concerns amid an alleged spike in violent crime among criminal refugee gangs and drug smugglers. Obaida says the fact that many locals have found work thanks to the presence of NGOs in the region and that the NGOs are also offering services to the locals has not changed her mind. After all, the refugees have also brought worms and diseases, she says. At least that's what she heard from the neighbors.

In addition to the concrete problems caused by the arrival of the many refugees, rumors and slander — often spread by local media — are poisoning the climate. Local journalist Sharif Azad, for example, is leading a campaign to send the Rohingya back to Myanmar. Last summer he accused an NGO in a Facebook post shared a hundred times over of equipping refugees with weapons. The post featured a photo with pointed instruments. According to his post, the Rohingya were armed and planning an attack on Bangladeshis. The Reuters news agency found out that the alleged weapons were merely picks for weeding.

Mohammed also complains about local reporting. "There is a lot of fake news about us Rohingya," he says. "It is claimed that the refugees are criminals and bring diseases to Bangladesh. But generally, the local journalists can't prove their allegations. Many of them are too lazy to go to the nearby refugee camp and do their own research. They claim to have sources there. But they often just reflect the rumors," Mohammed explains.

Local journalists are poorly paid and usually have no professional training. "They don’t know what ethical standards are," says Dil Afrose Jahan, who reported on the refugee crisis as a journalist for the daily newspaper Dhaka Tribune. At the beginning of the crisis, journalists from Bangladesh's capital and from all over the world came to the border region. Today, local journalists are largely on their own. Since most of the reporting is only for online outlets, where it is all about clicks, there is often exaggeration, says Jahan. "Many stories are written luridly to attract the attention of the readers. Fact-checking often plays only a minor role in this."

In 2019, the government started building a fence around the camps. In February, the concrete pillars had already been driven into the ground, the barbed wire partially rolled out. The fence is to prevent the refugees from mingling with the local population. That will mean even less contact between refugees and the local population. And more rumors on both sides.

Background: Rohingya in Myanmar and Bangladesh

The Rohingya are Muslims who have faced decades of persecution in Myanmar, which is predominantly Buddhist. Gradually, the Rohingya were deprived of their citizenship in the Southeast Asian country. The minority is accused of originally coming from neighboring Bangladesh and of having illegally immigrated to Myanmar. In 2016 and 2017, the military launched a particularly brutal crack-down on the Rohingya after insurgents carried out attacks on police stations. International courts are investigating allegations of genocide.

Bangladesh has taken in around a million Rohingya since the first expulsions by the Myanmar military in the late 1970s. The population of Bangladesh is 162 million. Almost a quarter of all Bangladeshis live below the poverty line, and the annual gross national income in 2018 was around 1,600 euros. In the past, refugees have been deported to Myanmar in the course of several repatriation campaigns. Currently the government of Bangladesh is again trying to persuade the Rohingya to return to Myanmar. But so far, none of the most recent refugees has accepted this offer, for fear of further persecution.

Verena Hölzl is a freelance journalist based in Bangkok.

On recipes and roaming elephants

How Rohingya and Bangladeshis work together on a radio show