Ukraine's public broadcaster UA:PBC is getting a new, cross-media newsroom. For the Ukrainian public, this means fast, reliable, up-to-date news on all broadcast channels. 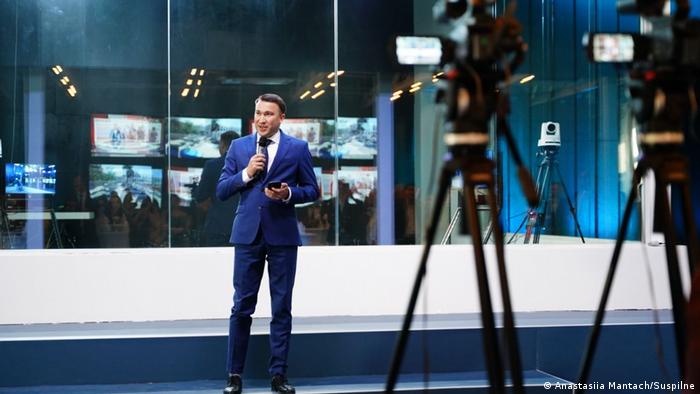 Mykola Chernotytskyi (Head of the Management Board, UA:PBC) in front of the so-called "glass box", the heart of the new newsroom

"I was very passionate about the concept of public broadcasting but did not believe that UA:PBC had the slightest chance to outgrow the 'oligarch channels'," project manager Dmytro Khilchenko recalled in his opening speech.

Four years ago when UA:PBC was founded, the vision of an independent, wide-reaching public media outlet in Ukraine was just that: a vision. The presentation of the modernized newsroom on September 6, 2021, was the result of hard work and extensive changes that Khilchenko was a part of from the very beginning.

"We are now able to report independently and impartially on the most important issues for Ukraine," he proudly announced.

The Ukrainian media landscape is still largely influenced by businessmen and politicians who finance national TV stations and thus exert control over what is covered and how. UA:PBC is now a strong competitor in the news sector. For Carsten von Nahmen, it was the commitment of the employees that made all of this possible. In his speech, the managing director of DW Akademie emphasized the special partnership with UA:PBC and how they were able to work together to overcome difficult circumstances such as the Corona pandemic. 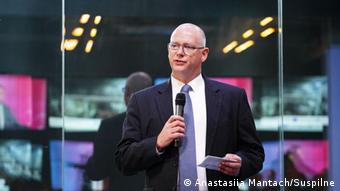 "Commitment has carried us through difficult times," said von Nahmen. "I'm very happy to say that we will fulfill all our goals."

DW Akademie has been implementing large-scale media projects in Ukraine since 2013. As part of the EU project "Support to the National Broadcaster of Ukraine", the Public Media Academy was founded and a new cross-media news center, the "Newsroom 2.0", was built. Once completed, this cross-platform, multimedia newsroom will be populated with journalists, editors and technicians working to serve the people of Ukraine.

They will also have access to an improved editorial structure, a modern production system and high-quality equipment. These will enable them to deliver reliable news quickly and conveniently on all channels, including their website and social media channels as well as their TV and radio stations. Training for journalists is being provided by the Public Media Academy, through which UA:PBC is making a lasting contribution to an independent, objective and pluralistic media landscape in Ukraine.

Missed the event? Watch it here: