Over 100 participants from local universities, NGOs and regional media outlets attended the opening event of the Public Media Academy (PMA) of the Ukrainian Public Broadcaster, UA:PBC, in Odesa on Thursday 25 April 2019. 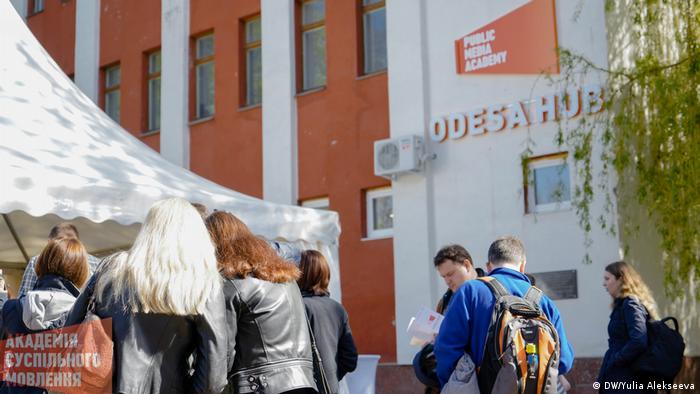 The Odesa branch of the Public Media Academy, an established internal training department of UA:PBC, created two years ago when the state broadcaster was transformed into a public broadcaster, has been designed as an appealing modern co-working and training centre to attract regional media professionals and students. The objective is to facilitate the development of independent media and community initiatives in the Southern region of Ukraine, such as professional trainings in the new editing room, public lectures on media trends or capacity building sessions.

Opening the event, Dr. Ernst Reichel, Ambassador Extraordinary and Plenipotentiary of the Federal Republic of Germany to Ukraine welcomed the renovation work. “With the opening of the Media Hub in Odesa we have reached an important milestone on our road to creating an effective Public Broadcasting Service. I hope that the hub will succeed in offering trainings for journalists, providing them with networking opportunities, and thereby contributing to an independent, critical and, in the truest sense of the word, pluralistic media landscape.”

The renovation of UA:PBC building and the capacity-building of UA:PBC Public Media Academy is part of a large EU-funded project, co-funded by the German Federal Foreign Office supporting the reform process of UA:PBC with a focus on quality. Mykola Chernotytskyi, UA:PBC member of the Management Board, responsible for regional broadcasting, was present for the occasion. “We are very grateful to our partners, the Delegation of the European Union to Ukraine, the Ambassador Extraordinary and Plenipotentiary of Germany, the BBC Media Action and the DW Akademie, for the support towards public service broadcasting. We believe that this space will become a prerequisite for the development of the media community all over the southern region of our country”, he announced.

Carsten von Nahmen, Head of DW Akademie explained:
"At DW Akademie we believe in the value of training and lifelong learning in the media field. It enables us to respond to the challenges of today's information society and deliver high quality journalism. In launching the Media Hub together with our colleagues from UA:PBC and the Public Media Academy, we aim to encourage new journalistic ideas and approaches and strengthen Ukraine's public media service." 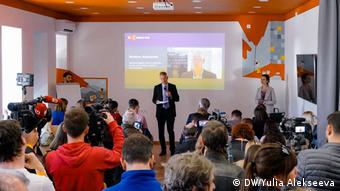 Michael Karhausen, Head of the Asia and Europe Department, Media Development Section, DW Akademie, further went on to explain how the new media centre would contribute to a vibrant local media community. “I truly hope that this space will inspire people to share ideas, knowledge and to then spread the information in their communities about this place, the things one can learn here, and the experiences that can be obtained. I am fascinated by the strong commitment of our local colleagues from UA:PBC who have worked on building this Academy. Here you can directly feel the reform progress” he noted.

Three groups of 10 to 15 participants attended the first short trainings held in the newly created educational space: a workshop for mobile journalism delivered by the Deutsche Welle  expert Jakov Leon and the video filming basics by the BBC Media Action trainer Kevin King. “Working with the journalism faculty students I have always been strongly convinced that in order to be creative and artistic it is necessary to be taught by highly qualified professionals, and to have a space to accommodate students themselves or people willing to become creative, and to be journalists. That is why I always support such initiatives. It matters where you are, and it is this activity and creative spirit that wakes a desire to work”, mentioned Tetiana Kuznetsova, the Journalism Faculty Dean at the Odesa Mechnikov National University. 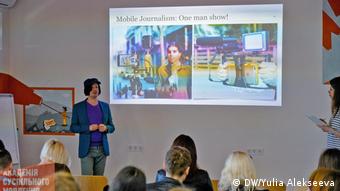 A key objective of this EU-funded project entitled “Support to the National Public Broadcaster of Ukraine” co-funded by the German Federal Foreign Office under the programme “Expanding Cooperation with Civil Society in the Eastern Partnership Countries and Russia” is the organisational development support, the promotion of public broadcasting through the establishment of a functioning digital multiplatform Newsroom and a training centre, the Public Media Academy (PMA). The project seeks to create a permanent basis for quality, objective and unbiased news.

DW Akademie is Deutsche Welle's centre for international media development. As a strategic partner of Germany’s Federal Ministry for Economic Cooperation and Development, its projects strengthen the human right to freedom of expression and access to information.

DW Akademie started to support the reform process of the National Public Broadcaster of Ukraine in 2014 with the support of the German Federal Foreign Office. In partnership with BBC Media Action, the BBC’s international development charity, and NIRAS, an international, multidisciplinary consultancy company, DW Akademie is currently supporting the transformation of the National Public Service Broadcaster of Ukraine (UA:PBC) into a modern and independent media.