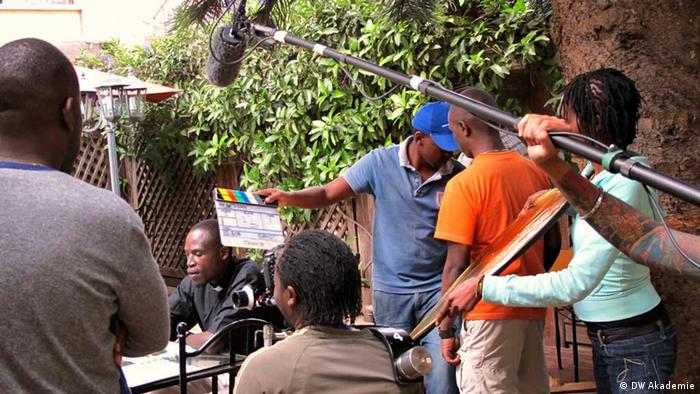 Kenya is ridden with conflicts. Given the political polarization and ethnic tensions, hate speech, fake news and propaganda have increased at a disturbing rate. These are powered by dangerous rumors about COVID-19, as well as by Russian disinformation campaigns about the war in Ukraine and reasons for the worsening food crisis. Prejudices and stereotypes are often deeply rooted among the population but also reflected or fueled by the media.

Media houses trying to counteract this with well-researched stories and conflict-sensitive reporting often hit a wall because many media are owned by politicians who stoke up ethnic conflicts and support biased reporting. Given the coronavirus pandemic, many media outlets are also struggling to survive financially and lack the equipment or staff needed to produce skilled reporting.

To help counter hate speech and misinformation, DW Akademie works with local experts and partner organizations to support radio stations in rural areas. The goal is for these stations to report independently, fairly and accurately. Experts from a so-called iLAB monitor Kenyan reporting and uncover disinformation and misinformation.

A network of investigative verification teams in media houses helps determine whether something is true or fake, whether a source is reliable or not, and to recognize biased information. The teams each focus on rumors and fake news having the greatest impact and relevance on a specific issue such as COVID-19 and health, public spending and corruption, extremism and hate speech.

DW Akademie also supports an alumni network; members regularly meet for conferences and discussions on current topics pertaining to the media industry and freedom of expression.

To help media outlets create a sounder financial base, DW Akademie is working with Kenyan experts to establish a pool of media consultants to help local radio stations develop viable business models as well as quality journalism skills for radio and online. In addition, they are forming a broadcasters association so stations can jointly represent their interests and rights and have a stronger bargaining power when dealing with political decision makers and advertisers.

African stories on movie screens around the world

Moviegoers rarely get the chance to watch African films. But that may be changing as DW Akademie is helping African filmmakers gain international exposure. One of the productions was even striving for an Oscar. (23.01.2018)

Many women journalists and bloggers in Uganda and Kenya report experiencing harassment on the Internet. Sexist comments, stalking or leaked photos can cause problems for female media professionals, both on and offline. (07.03.2016)

Kenya: Creating a space for freedom of expression

It is increasingly difficult for journalists and human rights activists to express themselves freely in Kenya. The Kisumu Media Information Hub is a space where journalists can create their own critical community. (08.07.2015)

Philemon Emongonyang wasn't going to give up. The radio journalist had spent a week trying to access Kisumu County's budget proposal. His case demonstrates how hard it is to report on governance in Kenya. (19.05.2016)

Teamwork is one thing but what’s just as important is that men and women have equal opportunities. In Kenya, radio stations with established gender policies are setting rules for fairness in the workplace. (29.10.2019)

The art of marketing films: Workshop for filmmakers in Nairobi

Young filmmakers came together in Nairobi, Kenya for a workshop on how to market and distribute films and TV productions in Africa. (10.07.2019)