How the Indian Show "Zindagi Live" attracted its audience by mixing serious topics with Bollywood flair. By Vinamrata Chaturvedi 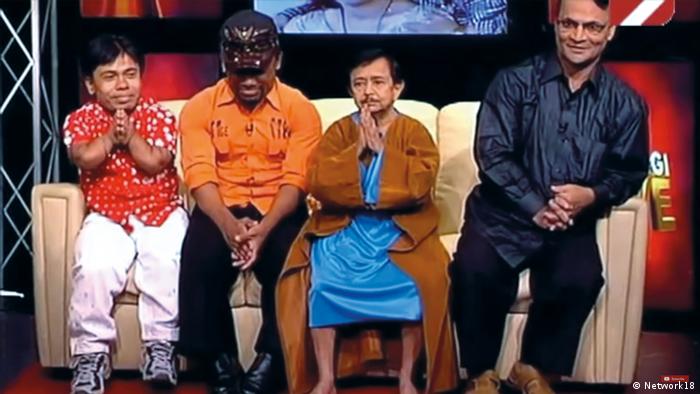 Guests at the “Zindagi Live” studio.

''Why do you want people to get stressed out on a Sunday morning by watching a show about India’s conflicts and problems?'' That's how a few journalists reacted in the editorial meeting when their colleagues presented the idea of ''Zindagi Live.'' The show was supposed to sensitize viewers to the complex social issues in their country without stirring up hatred. But once ''Zindagi Live'' started being broadcasted, it developed a dynamic of its own.

The show began in 2007 in the channel IBN-7 (later relaunched as News18 India) and continued successfully for six years. It was the first show of its kind on Indian television. ''Zindagi Live'' was supposed to be hosted by a famous Bollywood actress, but after some unsuccessful rehearsals, the job was given to famous journalist Richa Anirudh, who dealt with sensitive issues such as female fetocide, Hindu-Muslim riots, and homosexuality — topics which no one had thought of talking about on a TV show before.

''Zindagi'' means life, and the show was based on real-life stories of people who had suffered because of taboos, or experienced tragedies and overcome them. The show was centered on the protagonists and their families and friends. It included activists, experts, and sometimes Bollywood celebrities. It presented background reports on the issue and on-location shooting of the protagonists at their homes. Not only the experts, but also the spectators in the studio were invited to share their thoughts. To keep the show light, Bollywood and Indian folk songs were sometimes played in the background.

In its very first year, ''Zindagi Live'' won the Best Talk Show award given by Indiantelevision.com, and it continued to win many awards in the years that followed. Eventually, other shows with similar concepts were created, such as ''Satyamev Jayate,'' hosted by Bollywood star Amir Khan. The success of the shows was based on their mix of reality TV, songs and popular celebrity guests who kept the audience engaged.

How did the idea for ''Zindagi Live'' come up?

Richa Anirudh: TV channels with varied content were at a peak in India in the mid-2000s. People were expecting more than just the news from a channel. One of my editors wanted to make a show which could bring newsy content and awareness with a flavor of ''The Oprah Winfrey Show.'' That’s when the concept for ''Zindagi Live'' was created. It was the most expensive show at that time in the TV news media.

What were the challenges?

I went to meet an alcoholic woman, and she yelled at me because in Indian society, women are not expected to be drinkers. I was patient and ultimately convinced her to talk about alcoholism. On the show, she said, ''Yes, I have been an alcoholic for 20 years, and this has affected my family.'' Her words had the power to address the issue. In 2007, we couldn’t find lesbian couples as women were reluctant to speak about LGBT issues, so we made the show without them. However, in 2010, we found lesbian couples and mothers of homosexual children and made another show. For an episode on domestic violence, the male victim refused to talk. ''I am a man,'' he said. ''How can I admit to the world that my wife beats me every day?''

Is it easier now to find people who are prepared to participate?

Due to education and the internet, people are slowly but surely accepting the changes. In 2007, we would never have been able to make a show about a live-in relationship where couples live together without getting married, because it was a taboo. Young people working in Delhi and Mumbai were reluctant to speak as their hometowns were small cities. However, today it is much easier to make such a show.

How did the public react to ''Zindagi Live''?

The viewership was average in the beginning, and it gained momentum when we addressed different conflicts. We received emails from people who told us how they dealt with issues like domestic violence just by watching my show. They liked the idea of increasing awareness about the issue without stirring up hatred. ''Zindagi Live'' became the flagship program of the channel IBN-7.

Did you ever feel an issue was too sensitive to be discussed?

An episode on the demolition of the Ayodhya Mosque was made, and we edited out many parts of the discussion between the leaders of the Hindu and Muslim community as those could have led to riots. We can address issues like religion without deepening the divide if we talk about people’s problems. The show opened the window for discussion in society and made people aware of the taboos. Richa Anirudh is best known for hosting the TV show ''Zindagi Live,'' broadcast first on IBN-7, then on News18 India. Today, she is the producer and anchor of the YouTube show ''Zindagi with Richa'' which follows the same concept. And she presents a show called ''Big Heroes'' where she interviews unsung heroes of the society. Richa has received various prestigious prizes and awards for her work.

The misfortune of having a divine body

In India dicrimination has many different names and faces. By Vinamrata Chaturvedi