Static society, shifting identities: Taboos and the power of Bollywood

The misfortune of having a divine body — In India dicrimination has many different names and faces. By Vinamrata Chaturvedi 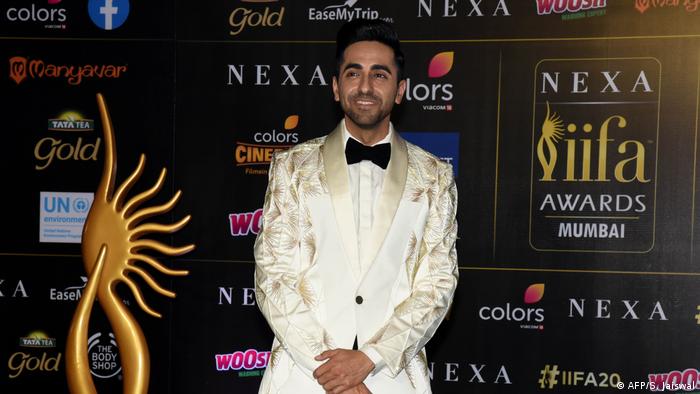 Popular Indian actor Ayushmann Khurrana, who stars in the film "Shubh Mangal Zyada Saavdhan" as a young man bucking social disapproval to be with his beloved — a time-tested Bollywood plotline, except the object of his affection is male.

Conflicts often smolder in secret. Those affected are too isolated to raise their voices, mainstream society does not want to hear about it, and often these groups are persecuted. The media frequently functions as the mouthpiece of the majority opinion, thereby cementing discrimination against these groups or individuals. But discrimination has its price. It is paid by the people living in conflict with more powerful social groups or with the state. These people are often denied the right to human dignity, which is enshrined in the Universal Declaration of Human Rights. But mainstream society also pays a price: the anger of discriminated groups can be discharged into violence, as could be seen in the protests against police violence in the USA in 2020. A society that tries to turn a blind eye to change becomes unmoving and refuses to change.

India is a country that attaches great importance to conventions. It is very difficult to be different to what mainstream society expects. But in recent years many taboos have been broken; people are increasingly talking about sensitive issues. On the one hand, this is thanks to the many brave individuals who have defied conventions and norms. On the other hand, some media outlets have also found formats to make sensitive issues accessible to a wider public without stirring outrage.

Below, our author Vinamrata Chaturvedi reports on the struggle of individuals against discriminatory social conventions, for example, in relation to homosexuality or physical disabilities. Read also her article on on the TV show "Zindagi Live" that is creating change with a touch of Bollywood.

The misfortune of having a divine body — In India, discrimination has many different names and faces by Vinamrata Chaturvedi

As a young man in Delhi in the early 1990s, Sharif D. Rangnekar couldn’t understand why he felt aroused when he watched videos of the male singer Jermaine Jackson. Although this was an era of change in India, homosexuality was still a taboo that nearly nobody spoke about. Nor would this change for years to come. People were convinced that homosexual men could turn straight men gay. Religious leaders called gay marriage "unnatural" and asked their followers to boycott the LGBT community. After the Supreme Court’s verdict in 2013 which made same-sex relations an offense, the popular yoga guru Ramdev invited gay people to his ashram, promising to "cure" them from what he considered to be a disease. "That's how I grew up — with so much conflict in my mind and the outside world," says Rangnekar, today a 50-year-old communication consultant who published his memoirs in 2019 under the title: "Straight to Normal: My life as a gay man."

Rangnekar did not want to remain silent and started writing articles on LGBT issues for the leading English dailies "The Times of India" and "Hindustan Times." English-language newspapers were read by the urban, educated population and they would from time to time bring up topics considered taboo by society. Non-English publications whose readers belonged to the broad majority of the population refrained at that time altogether from publishing articles on sensitive topics like homosexuality, pollution or the wage gap. Writing about those topics was risky. "I used a pseudonym — Bharat I. Sharma," Rangnekar explains. "I wanted to raise my voice while protecting my family."

In 2009, things began to change. The Delhi High Court delivered a judgment legalizing consensual homosexual activities between adults. After that, Rangnekar started to write articles under his own name. But though the editors were supportive about raising these issues, the reactions of readers were not all positive. In 2015, after publishing an article for the website Scroll on the referendum about same-sex marriage in Ireland, readers threatened to kill him and demanded he leave the country. A short time later, in September 2018, India’s Supreme Court overturned its 2013 ruling, and decriminalized sexual relations between gay people.

Homosexuality is not the only long-standing issue that’s been difficult to address in India. Indian society is extremely complex, but at the same time reluctant to question traditional social concepts. Discrimination against people with special needs, for example, is still largely unquestioned.

Sameer Chaturvedi has been living with cerebral palsy for 34 years. His life has not been easy. When he was a child, his friends used to mimic the way he walked and make fun of him. Later, during a job interview, he was forced to stand up from his chair to show how much he could move. But despite his special needs, he managed to enroll in Jawaharlal Nehru University to study sociology, where he is now researching disability and publishing articles on the topic.

He criticizes the stereotypes about disabled people. In Indian mythology, for instance, evil people usually have some kind of disability. Take, for instance, the visually impaired King Dhritarashtra from the Indian epic of Mahabharata and the hunchbacked woman Manthara from Ramayana. On the other hand, mainstream media often portray disabled people as heroes or models of resilience to be followed. In reality shows like Indian Idol, disabled people are pitied and presented as particularly nice people. Disabled people never seem to be normal people with disparate characteristics. This is why when Prime Minister Narendra Modi used the Hindi word divyang for disabled persons, Chaturvedi criticized him strongly in articles for various media platforms. Divyang means "divine body." Though readers and relatives took issue with him for speaking out against the PM and the system, Chaturvedi defended himself, saying "We need empathy, not sympathy."

While it’s often the actions of courageous individuals like Chaturvedi that end up changing public opinion, in some cases international attention has triggered a debate in India. This was the case following the 2012 Delhi gang rape. The worldwide media coverage of this crime led to a broad public debate on violence against women and legal amendments for faster trials and tougher sentences for the perpetrators of sexual assault against women. This encouraged many women who until then had silently accepted violence from their husband and their families. Vandana Yadav, a young woman from Kanpur city, was one of them. After being beaten and threatened by her violent husband, she decided to file a case against him and request a divorce. "Girls are raised to compromise in their married life," she says. "I chose to live with self-respect."

This new development was reflected in the media as well. News websites for women were established to address the issue of gender inequality. Oddnari, one of the first Hindi websites dedicated to gender-centric issues, started campaigns for women's legal rights and a more prominent place of women in economy and politics.

But old habits die hard. The first Bollywood film on homophobia, titled "Shubh Mangal Zyada Savdhan," was released in February 2020. After watching it, Rangnekar was critical of the way the film treated the topic of homosexuality as a joke instead of addressing it as a real issue. But many filmgoers enjoyed it. Manju Taneja, a South Delhi woman around the same age as Rangnekar, watched it together with her family. She thoroughly enjoyed the funny scenes. But when asked about how she would react if her son were gay and chose a man as a partner, Taneja was adamant. She said: "I wouldn’t allow my son to do that, and if he did, I would ask him to leave the house."

Vinamrata Chaturvedi is an Indian journalist. Aspiring to become a market reporter in the niche area of cryptocurrency and blockchain, she also likes to write about people and social developments.