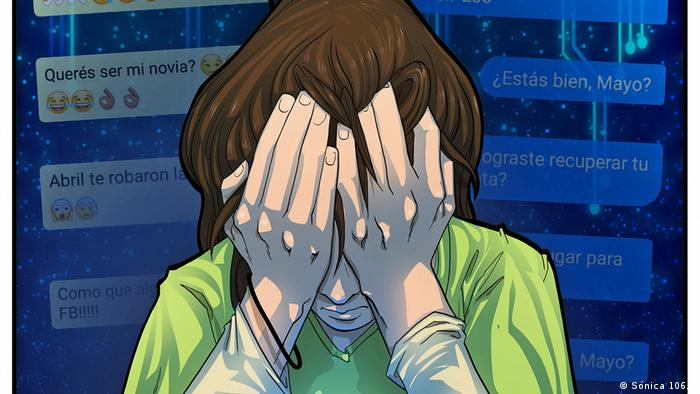 Abril is a young Guatemalan who has been living with her grandmother since her parents left the country, probably to find work. Like many youth in Guatemala she has dreams and is active on social media. She is also the fictitious heroine of "Sin conexión" ("Disconnected"), a comic explaining digital security to young Guatemalans. Abril's story begins one day when she forgets to log out of Facebook. Like many of her peers, she goes to Internet cafés when she wants to go online. 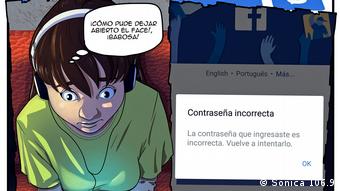 But this time someone hacks her Facebook account, changes her password and using her name starts to post "her" private thoughts. "I'm looking for a good-looking boyfriend who wants to know my secrets", says one of "her" posts. Other users begin to mock and bully her and although distraught, Abril suddenly realizes how much private information she herself reveals online.

The comic "Sin conexión" was developed by the Guatemalan Institute for Radio Education (IGER) – a long-time DW Akademie partner. Together they are spearheading media and information literacy (MIL) in Latin America. In poor areas where children aren't able to go to school, IGER is often their only access to education, with special radio programs and volunteers as instructors.

Radio Sónica was launched in 2015 and focuses primarily on disadvantaged youth living in the poor districts of Guatemala City,  the country's capital. The station sees itself as a multiplatform medium and uses social networks including Instagram and Facebook. The producers want young people to learn how to use social media responsibly. 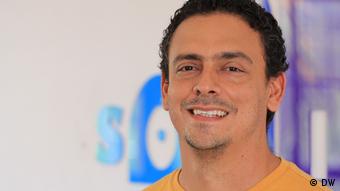 "We see that young people are fairly casual with their own data when they're online and this makes them vulnerable," explains Edgar Zamora, a journalist and local DW Akademie expert at Radio Sónica. "Young listeners need media skills to exercise their rights in the digital world," he says. The team decided to examine a digital topic using a traditional format: comics. "'Sin conexión' takes up a complex problem but conveys our message in an entertaining way. We didn't want to create a text full of advice because young people are already inundated with media messages," he points out.

A radio program as bridge to society

The Radio Sónica concept offers more than a critical use of the media; it also involves disadvantaged youth with content that functions as a bridge to Guatemalan society. It gives young people a voice in one of the most violent cities in the world and whose reality is rarely reflected in the mass media. 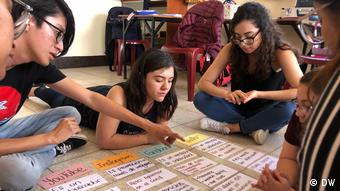 "Radio Sónica enables young people to speak out and who are otherwise ignored by commercial stations. It also looks at taboo topics such as gang crime, sexuality and domestic violence that other media don't dare tackle," says Johannes Metzler, DW Akademie's Country Coordinator for Guatemala. When young people can freely express their concerns, he stresses, it contributes to a freer society and counters pervasive violence. "If you can make your voice heard using words, you don't have to do it with weapons," Metzler says.

Towards the end of the comic, Abril learns the media skills that Radio Sónica is teaching young people: how to work safely with personal data online. Using a trick, Abril and a friend catch the person who has hacked her account.

The comic illustrates how important data security is on the Internet and makes clear that cyberbullying and stalking are unacceptable. The story is also encouraging: at the end Abril bounces back and decides to publish her experiences in a blog so that others can learn from her mistakes.

While the majority of Guatemalans are under the age of 30 very few have a voice in the media. The new radio station Sónica 106.9 is changing that - with support from DW Akademie. (11.09.2015)