From Covering a rally to analyzing Twitter feeds, a large part of a journalist’s job is to report on what is said. But sometimes people say shocking things. How far should a journalist go when reporting on hate speech? 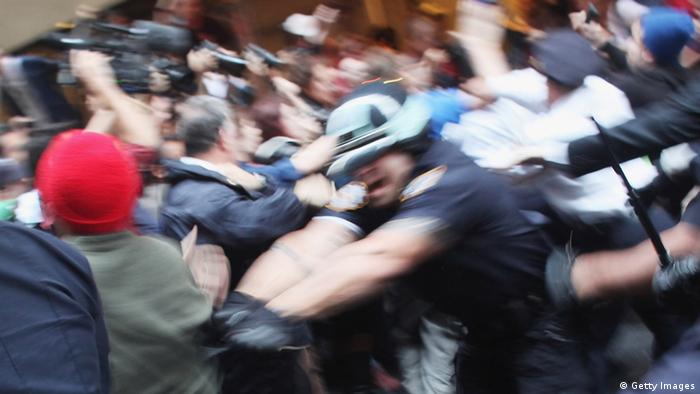 As journalists, most of us have been confronted by hate speech at some time, whether it's a politician bawling racial slurs at an election rally, angry protesters singing derogatory songs about a neighbouring ethnic group, or a prominent religious leader denigrating other faiths on Facebook.

The question is, how can we do our job of reporting the facts without being used as a mouthpiece to spread incendiary comments and stir up hate and possibly even violence?

After all, history has shown that hate speech and stereotyping can have catastrophic consequences, especially when the media pours fuel on the fire as the examples of Rwanda and Kenya demonstrate.

To report or not to report on hate speech?

In some countries, press councils have called a blanket ban on reporting hate speech in sensitive periods, such as in the run-up to elections. By not reporting such comments, the argument runs, the media is helping to stop the spread of a message of hate.

But on the other hand, the media also plays a vital role in exposing hate speech and the people using it. By not reporting what was said, journalists run the risk of covering up the hateful messages being put out by the people they are reporting on.

If I'm going to report, what should I keep in mind?

National Party leader William Smith has called Iti people stinking worms who should go back and live in the holes they crept out of. Speaking during a campaign visit to Riverside Village, Smith also said Iti traders had taken jobs away from his people and the parasites should be crushed underfoot and their business burnt.

The leader said that if elected, he would make sure all jobs in the region would be reserved for the Atu people, and the Iti would have to surrender their businesses to the government. During his speech, he also promised to build a new school for the village. ...

During a campaign visit to Riverside Village, National Party leader William Smith has insulted the Iti people by referring to them as worms.

Union Party leader Gabriel Thyme said Smith's words were "racist" and "irresponsible." "His remarks bordered on genocide," Thyme added, referring to Smith's call for violence action against the Iti people. Thyme said his country prided itself on its diversity and people's ability to live together peacefully. "Politicians should support unity rather than trying to tear it apart,” he said.

Atu in Riverside Village are furious after National Party leader William Smith used a campaign speech to insult the Iti people. "It is unbelievable that a politician in a peaceful country like ours could try to stir up racial tension before an election," village headman Augustine Sumo said. "We live alongside the Iti people in peace and that is not about to change."

Shop keeper Cas Dou said she had many customers and friends in neighboring Iti village. She said she had attended the National Party rally because she wanted to know more about what Smith would do for the village if he was elected. "He didn't say anything about the bridge we need here," Dou said.

Others in the village were shocked by Smith's comments that the Iti were "parasites that should be crushed underfoot". Smith also threatened violence against Iti traders in the region.

Reacting to Smith's comments, national footballer Josiah Myers, who is an Iti, said the politician was trying to divert attention away from his party's failure to do anything for the people in Riverside Village during his current term as a politician.

Hate speech versus freedom of expression

During certain periods, such as election campaigns, media organizations play an important role in distributing political messages. Because of this, some journalists believe that by not reporting the actual words said by a politician (even if they are hateful), they aren't allowing that person the right to be heard.

However, although a person has a right to express themselves, this doesn't automatically mean you and your media organization are obligated to provide a platform to spread offensive and hateful comments about a particular group.


What about in the studio? How do I deal with guests and callers who use inflammatory language?

An investigation into the post-election violence in Kenya blamed several vernacular radio stations for having indirectly sanctioned or condoned hate speech by failing to prevent guests or callers from making inflammatory comments on air.In some cases, this wasn't by design, however, but partly due to inexperience.

To avoid this happening to you, it is vitally important to establish guidelines for the use of hate speech on air.

Similarly, if hosting a phone-in show

Some guests stand upon their right to freedom of expression. As already discussed, the Declaration of Human Rights gives people the right to say what they think but it doesn't assure them of their right to spread their poisonous opinions on your radio or TV station.

Many women journalists and bloggers in Uganda and Kenya report experiencing harassment on the Internet. Sexist comments, stalking or leaked photos can cause problems for female media professionals, both on and offline. (07.03.2016)

Hate speech matters. After all, history has shown that it can have deadly consequences. Here are some answers to frequently asked questions about what it is, what it isn't and why you should care. (09.03.2016)