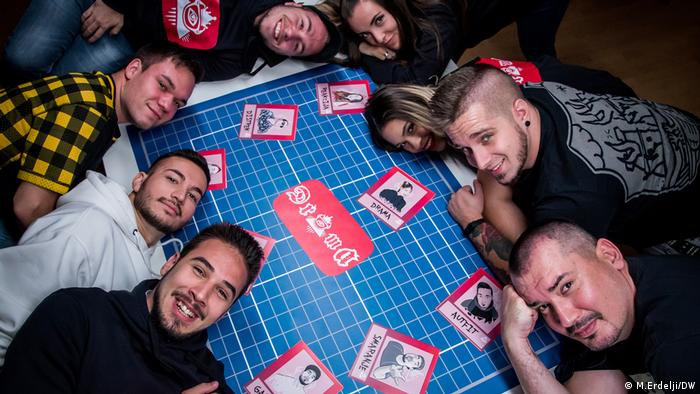 Stirring up a heated debate: The creators of "Drama".

To fully understand the turmoil that broke out in autumn 2019, you need to take a close look at the Serbian YouTube scene. You’ll come across a YouTuber named Ur Ke, who used to go out on the street in search of people holding food. He would suddenly approach them and punch popcorn boxes, ice cream cones or burgers out of their hands, film their reactions, and then post the videos on YouTube. After he received some criticism by other creators, another YouTuber named Cone reacted by creating videos in which he shared food with passers-by on the same street where the original video was filmed, explaining that he did this to prove that the YouTube scene in Serbia is not as bad as one might think. While Ur Ke’s videos are examples of so-called "surprise" videos, Cone's answer to the criticism can be filed under "reaction" videos — the main categories for the most popular YouTube content in Serbia.

Surprise videos are mainly pranks, clips filmed on the streets while mocking or even abusing strangers.

When it comes to reactions, there is an enormous amount of sexism, misogyny and online abuse ("slut shaming") of female creators. For example, two adult male YouTubers would post videos showing them commenting on female creators, saying which ones they would have sex with, while comparing others they do not find attractive to various animals. Most of the female YouTubers shown in these clips are minors.

Though the creators who produce shocking, insulting content are in the minority, they have more subscribers than the majority of those who provide decent content. The better side of Serbian YouTube is made up of smaller channels that publish entertaining or educational content about gaming, DIY (Do It Yourself), "surviving" school, etc. Regarding popularity, the Serbian YouTube situation is very similar to that of traditional media in Serbia. On the one hand, there are independent media houses and investigative networks that offer good quality journalism but that struggle financially and have less of an impact on the audience. On the other, there are tabloids that, according to the Press Council, a self-regulation body for media ethics, breach the Serbian Ethical Code of Journalism on average more than 300 times per day.

Alarmed by the enormous amount of abusive content on the Serbian YouTube scene, a group of eight YouTubers, with support from DW Akademie, decided to launch a project named "Clickbait." They composed and recorded two songs, together with video clips for the songs. The first song with the same name as the whole project, "Clickbait," premiered in April 2019 and was highly acclaimed among the audience and media, with 2.8 million views and 76,000 likes. The main issue the song addressed was, as its name says, the excessive use of clickbait content. In internet slang, clickbait is content whose main purpose is to attract attention and encourage visitors to click on a link, without any concern whether the content itself may hurt feelings, be abusive or unethical in any way.

Six months later, in October 2019, the group of YouTubers launched a second video called "Drama". The song was about the situation on the YouTube scene where creators intentionally caused drama and feuds among each other. The title was almost prophetic, considering the drama that followed after "Drama" reached third place in YouTube trending in Serbia.

One of the most popular and probably most toxic (judging by the amount of abusive content he produces) YouTubers in Serbia, Baka Prase, 23 years old, 1.75 million subscribers, made a reaction video, insulting every YouTuber who participated in the video. Baka Prase accused "Clickbait" YouTubers of "national betrayal" since they cooperated with the German organization DW Akademie. It’s become a common insult in Serbia in the past 30 years, often made by nationalists to anyone who cooperates or works for Western organizations. The worst part were the rape threats he made against two female YouTubers, explicitly threatening one of them that he would rape her.

The reason for Baka Prase’s actions lies in the constant war among Serbian creators, caused by the fact that they work in a small market with tough competition. The main factor in almost every feud is money, either through monetization via views on the platform, or through sponsorships. Baka Prase is always number one on trending and he has a long history of attacks on anyone who could be a possible competitor. Since 2011 when he started his YouTube career, he’s made enough money to buy two Porsches and an apartment in the most exclusive and expensive location in the Serbian capital, Belgrade.

As "Drama" continued to move up in YouTube trending, hitting number one, he continued to post insulting videos on a daily basis. He then caused a backlash against "Drama" by encouraging creators who are friendly with him to publish their own videos. Baka’s friends chose the strategy of insults, bullying, and encouraging subscribers to dislike or report the "Drama" video so it would stop trending. In the end, "Drama" was a success, because online bullying has become a highly covered topic in schools, media and in the YouTube community. Almost all the YouTubers who were part of the "Clickbait" project were invited to speak at the public events — all except the girls who took part in the videos. They decided to opt out of the project because they could not handle the pressure and sexism.

Baka Prase decided to tone down his attacks a bit. But he came under fire from the media once more at the beginning of the coronavirus crisis, when he started selling face masks with his logo that were not protective at all.

Jovana Gligorijević is a journalist and editor at the Serbian weekly, Vreme, and website Vugl.rs.

“I would do it all over again"

Interview with Serbian YouTuber Darko Radovac a.k.a. "Dex"on his sense of responsibility.

The power of the net

Examples from Brazil and Serbia