Learning how to judge information is at the heart of being a responsible internet user. According to DW Akademie partner Penplusbytes, everyone, regardless of education, can learn to read between the lines. A toe in Uganda sells for 10,000 USD. Vaccinations cause impotency. If you hold your breath for 60 seconds, you can avoid getting COVID-19. These stories are all spread on social media in Ghana and they are all examples of misinformation.

Misinformation affects everyone, and while there is no cure, media and information literacy (MIL) is one way to limit its spread. MIL provides the necessary tools and skills to examine and to reflect on whether the information is valid and worth sharing. Yet can someone who is illiterate or semiliterate also be media literate? According to the Ghanaian organization andDW Akademie partner Penplusbytes, the answer is a resounding yes.

Semiliterate groups tend to be especially susceptible to misinformation and phishing schemes, as it can be more difficult for these users to check sources. Yet there are many approaches that all people can take to confirm the validity of what they see on legacy and social media.In order to reach these groups that have not had training in MIL, Penplusbytes went to the streets to speak to Ghanaians about what it means to think critically and click wisely.

Fighting against disinformation in Ghana

The "Market Roadshow" project, spearheaded during UNESCO's MIL Week, was designed to reach people outside the classroom, away from where MIL has traditionally been taught. For the two-day pilot program, Penplusbytes selected one of Accra’s central markets, Makola, for the first day and Nkrumah Circle Odawna bus station for the second.

"This was new for us," explained Precious Ankomah, project manager at Penplusbytes. "We had never done something in an uncontrolled environment before." 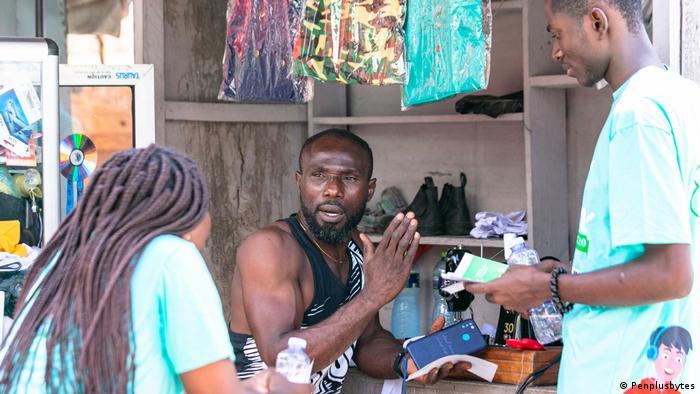 Volunteers spoke to both shoppers and sellers, explaining how to stop the spread of misinformation

The project, designed to reach diverse groups through direct conversations and visual materials where people naturally tended to gather, relied on a surprising maxim.

"Markets are very loud," said Ankomah. "The only way to counter noise is to make more noise."

According to Ankomah, her approach paid off. They began by playing a short radio drama over loudspeakers in Twi, Ga, Ewe, Hausa and English, which acted out a conversation repeating some of the common pieces of misinformation found online. These included 5G-Coronavirus connections to stories about people selling toes in Uganda.

After an interactive explanation from broadcast journalist and media personality Bishop Agbey Jnr. and an impromptu dance battle for a Penplusbytes t-shirt, 26 volunteers approached the onlooking crowd with flyers in hand. The flyers contained information on how to verify information online, explained in infographics and very little text. 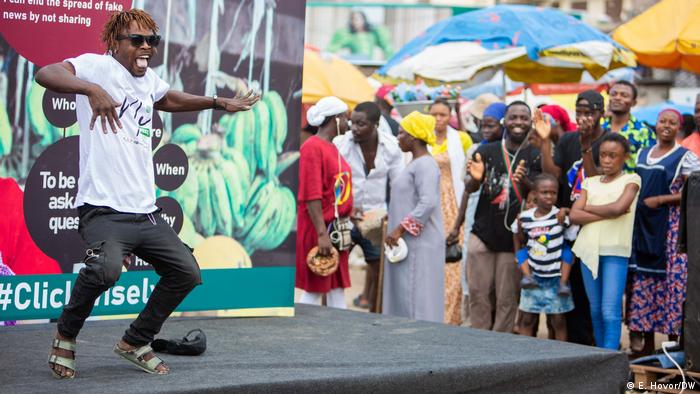 They focused on straightforward ideas, such as trying to confirm information with a second source or asking users to consider whether they would still be proud that they shared a story in a few years' time, approaches that both semiliterate and illiterate internet users can employ.

"I just can't believe the number of people we were able to reach," said DW project manager Laura Schröder.

For many of the Ghanaians Penplusbytes interacted with, their speaking language and the language they can read are different. While many can speak Twi, for example, it is less common to be literate in the language. This kind of disconnect can create a lot of opportunities for mis- and disinformation to flourish on platforms such as Facebook.

While most of the younger generation are on social media platforms, older generations tend to use only messenger services, such as WhatsApp, which can also be rife with misinformation.

Some of the crowd expressed how they had been tricked by scammers or felt obliged to forward email chains. One woman was convinced that a local actress had died after she watched clip on YouTube, until her children sent her a video showing that the woman was in fact alive and well. Broadcast journalist Bishop Agbey Jnr. invited the crowd to get involved and share their experiences

Going to the streets

Ankomah and her team of volunteers also gathered at a bus station the following day. There, they attempted the same process over again. This time, the languages were even more diverse than the day before.

Mavis Aryee, a volunteer whose first language is Ga, found the second day more fruitful, as she was able to approach people waiting on buses or in the station.

"We were able to raise awareness and many listeners could name personal examples of false information," explained Aryee, a presenter on Uniiq and Obonu FM. "Even though some listeners didn't care, others were engaged in the information we gave them."

Penplusbytes is a non-profit organization, established in 2001. It works with DW Akademie in spreading media and information literacy (MIL) in Ghana to encourage critical thinking and more security in digital spaces.

Through a program from DW Akademie’s partner Penplusbytes, students with hearing impairments are learning to think critically about the information they receive and share online.