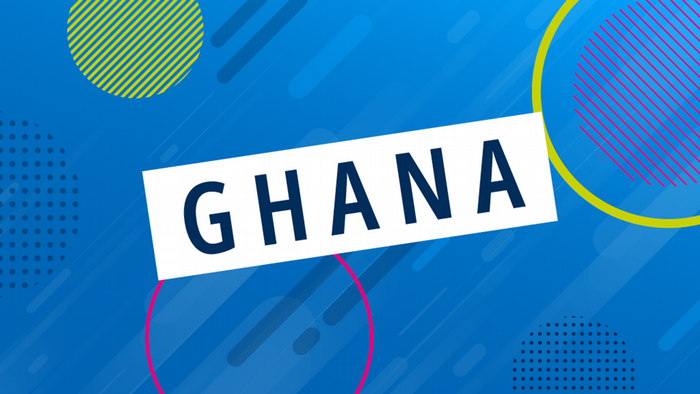 Ghana’s youth is embracing digital. According to the representative survey conducted for DW Akademie’s MIL INDEX study, three quarters of 15-25-year-olds own a smartphone. Over 70 % report going online with a mobile phone as well as using Facebook and WhatsApp on a weekly basis. Use of several different social networks and messengers is widespread and frequent. More data intensive networks like Snapchat (34.7%), YouTube (29%) and Instagram (26%) are used by a fairly large proportion of survey respondents every week. “We virtually live our lives on the Internet,” as one girl put it during a focus group conducted in Accra. “If it’s about politics, if it’s about entertainment, if it’s about education, you can find enough information on the Internet using your smartphone.”

The country report summarized here is based on the findings of the MIL INDEX study, for which a representative survey, eight focus groups and seven expert interviews were conducted in Ghana between November 2018 and April 2019. The study focused on five Media and Information Literacy (MIL) skill sets: access, analysis, reflection, creation, and action.

15-25-year-old Ghanaians are on the digital fast track. Smartphone ownership is at almost 80 % and over 70 % access the Internet every week. Over two thirds use Facebook or WhatsApp, roughly one third uses Snapchat and YouTube and more than a quarter uses Instagram on a weekly basis, according to the MIL INDEX representative survey data. There are significant differences based on gender and locality when it comes to daily use of the Internet: Women and rural dwellers access the Internet considerably less often than their male, urban counterparts. Nevertheless, the Internet has surpassed radio as the second most used medium on a weekly basis. Only television is still more relevant, with 85 % of respondents watching TV programs weekly. Newspapers and magazines are read by less than one fifth of the 15-25-year-olds every week. Based on the diversity of weekly media use and the diversity of media used for news and information, the MIL INDEX score for access was moderate to good (10.8 out of 20). 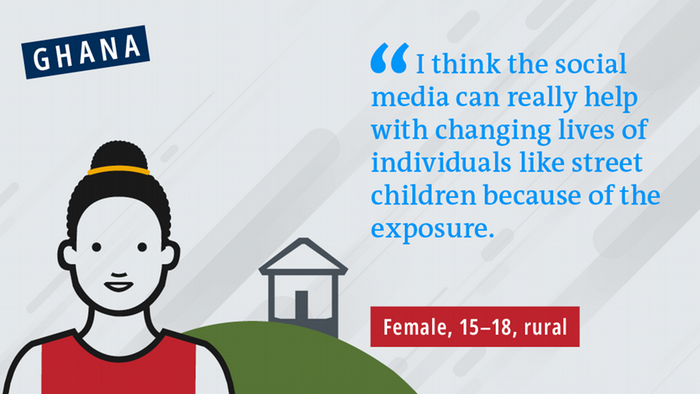 Knowledge about the Internet, journalism, and freedom of expression is quite common among the 15-25-year-old Ghanaians. Over two thirds knew that the right to freedom of expression is part of the Ghanaian constitution, close to 60 % could tell the difference between the Internet as well as Facebook and almost the same proportion could define journalism. The young generation thus achieves a good MIL INDEX score for analytical skills (13.1 out of 20).

On the downside, respondents were found to be quite uncritical when it comes to the independence of the Ghanaian media landscape, considering the levels of political ownership documented in the Media Ownership Monitor for Ghana (Reporters Without Borders/Media Foundation for West Africa 2019). Neutrality of media was judged as highly as diversity of media, which is documented to be very high in Ghana (see African Media Barometer 2017).

Ghana’s youths show a lack of reflection concerning adverse forms of communication like hate speech, cyberbullying, and disinformation. Though the focus groups documented many such experiences, the survey results showed that there was not enough awareness of harmful effects and far too much tolerance of these forms of malcommunication. The findings confirmed expert Awo Aidam Amenya’s view that “the majority of the youth […] do not reflect”. Only slightly more than one third of the respondents condemned an example of hate speech and the relative majority of respondents were willing to trust a fictitious Facebook posting which claimed a company had found a cure for HIV/AIDS. On the other hand, the respondents were quite adept at identifying news bias and censorship, which explains why the young Ghanaians still achieved a moderate score for reflective skills (10.2 out of 20).

Additionally, high percentages of survey respondents said there could be situations that justified biased reporting and censorship. This sentiment, that Ghana’s authorities are too lenient, and that freedom of expression is too far-reaching, was also echoed by some expert statements in the MIL INDEX interviews and is in line with findings from the last African Media Barometer (2017) for Ghana. 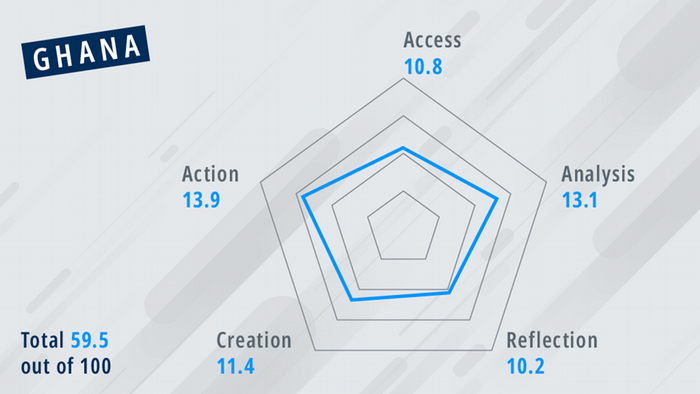 MIL skills are nothing but a potential for change, before they are put into practice. Sharing information and opinions, and supporting campaigns is one way of using these skills for the betterment of society. This is done by young Ghanaians on a regular basis, more than three quarters share information they obtained from the media and almost 70 % comment on social issues in public (online or offline) at least sometimes. Almost half of respondents also reported having joined campaigns for freedom of expression and access to information.

Self-assessment of MIL skills is also quite high. Over 70 % feel they can use media responsibly, critically analyze media, create and publish their own media, and over 80 % say they are good at reflecting what they do with media. Especially the latter finding contrasts with the fairly low levels of reflection documented above when it comes to hate speech, cyberbullying, and disinformation and the significant difference in self-appraisal between male and female respondents also calls for caution in interpreting the findings.

The focus groups showed that young Ghanaians use the Internet in a variety of ways to further their educational and economic opportunities. The MIL INDEX score for the action category is the best among all sub-dimensions (13.9 out of 20).

The focus of the MIL INDEX study was on the Media and Information Literacy skills of 15-25-year-old Ghanaians. Based on the quantitative results, on average this age group has good skills when it comes to action and analysis, and moderate to good skills in terms of access and creation. The weakest result was obtained in the reflection department. The MIL INDEX score was 59.5 out of a possible 100, putting young Ghanaians in the upper mid-range category for Media and Information Literacy.

For each of the five dimensions (access, analysis, reflection, creation, action), survey respondents received a score ranging between 0 (= no skills whatsoever) and 20 (= highest level of skills) points. The scoring system measures how often certain skills are actually put into practice (access, creation, action) or tests the skills directly (analysis, reflection). Since citizens cannot permanently use media and information sources unless they are journalists or media workers, a perfect score of 100 for any country appears unrealistic—it is more about the relative performance across time, and in comparison to other countries, as well as being a tool for identifying deficits to be addressed in media development.

How do young Africans access, use, create and engage with media and digital sources of information? The MIL INDEX study provides insights and perspectives. Read more on the study here.