Journalists should never be silent in the face of hate. By Hasnain Kazim 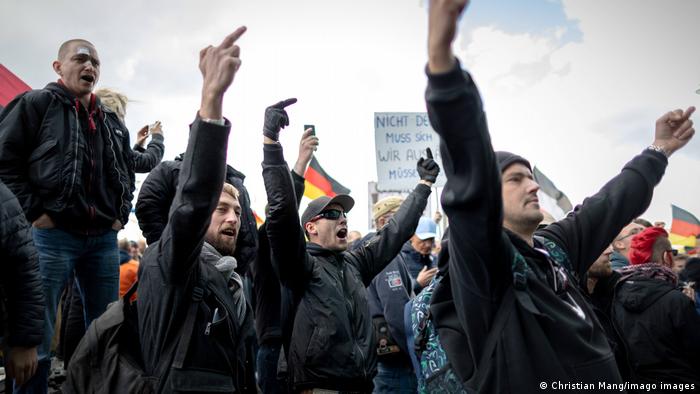 Increasing attacks against journalists: Right-wing protesters in 2018 in Berlin.

Journalists have been criticized since journalists have been around, and that's a good thing. They report for the public and they claim to depict truth, so accordingly, the public should be critical. Is what they are reporting true? Are they being factual? Is the analysis and the commentary well founded? Factual, knowledgeable and even sharp criticism is part of what it means to have press freedom and freedom of speech.

And yet, something has changed over the past two decades. Firstly, there's the issue of quantity. Up until a few years ago, the public largely expressed their criticism of articles, journalistic content and authors by writing a letter. Doing so meant first thinking about, organizing and formulating what you wanted to say, addressing an envelope, and affixing a stamp. Then there was a trip to the mailbox or the post office. There weren't all that many people willing to make the effort.

Today, people are much quicker to write their opinion and send their criticism, and that, too, is a good thing. Email and the internet have democratized the expression of opinion. But online communication has also made it easier for people to give their anger free rein. And the quality of criticism has also changed. Hate speech and verbal aggression have increased massively in recent years. It's become a proper flood, and the wave is getting bigger and bigger. Verbal assaults, insults and threats in emails, on internet forums and chat programs and especially on so-called social media have long become commonplace for journalists.

When it comes to certain topics — in Germany, for example, immigration, refugees, Islam, integration, climate change and e-mobility just to name a few — it's a given that the authors of articles will be inundated with messages. When the mails are angry, the senders still largely choose to remain anonymous. But the number of people that include their names, and sometimes even their full addresses and phone numbers, is growing. These days, people stand by their hatred. Unfortunately, it's become socially acceptable.

It's my impression that most editorial offices around the world are overwhelmed by the situation. They don't know how to deal with it, if and how they should defend themselves, and how they can protect the affected journalists from attacks.

Apparently, the fear of losing readers, listeners and viewers in what is already a difficult market outweighs the need to tell them clearly that insults and threats are unacceptable, that they will be blocked from writing comments and that legal action will be taken against them if necessary. In a civilized society, it's not okay to say whatever you want, and that has nothing to do with "infringing upon freedom of speech."

"We have to take the concerns and needs of these people seriously," a colleague told me in December 2015, when we had an especially high influx of hate mail because of the refugee issue. "We have to meet them on equal terms!" he said, and "Don't forget that they are also our subscribers!" These kinds of arguments left me speechless. Just that day, after the argument with my colleague, I received the following message from an anonymous reader: "We Germans should continue the work with you Muslims that we started with the Jews!" The words of my colleague were still echoing in my head. Should I really have to take the "concerns and needs" of such people seriously? Meet them "on equal terms?" Accept their verbal assaults, because they are likely subscribers?

This bothered me so much that I decided to start answering all, really all, of the letters I received beginning from January 1, 2016. For me, it was about finding a way to deal with all of this hate. And so, I wrote back! And I met them on equal terms. If someone was complaining about the "Islamification of Germany" then I responded saying that I was seeking the office of caliph, in order to turn Germany into a caliphate. If someone accused me of being a "foreigner" who wasn't sufficiently "integrated" in Germany, then I promised to work harder at this, together with my four wives. My primary purpose was not to make fun of these people, but rather to hold up a mirror to them with my exaggerated confirmation of their prejudice.

In 2017, the idea was born to publish such dialogues in the form of a book. In May 2018, "Post from Karlheinz: Angry mails from real Germans — and how I answered them" was published. (Read excerpts from the book here.)

At the end of 2017, after two years, I stopped answering all the messages. Being on the receiving end of all that abuse was taking too much of a toll. However, I still do respond to plenty of people, including those who've decided to target me with their hatred. In about a third of cases, they reconsider their choice of words, or tell you the real reason for their anger, or even apologize. The number of hate mails I receive has also declined noticeably, now that the writers know they'll get an answer from me. Even if the majority remain proud of their racist, misanthropic statements and are celebrated on the internet and embraced instead of made to feel part of a fringe group, the confrontation and interaction is worth it. It may be time consuming and sap you of strength, but it is urgently needed.

Editorial offices must develop guidelines for dealing with hate mail. Whom should we answer? What should we write to these people? How do we make it clear that a line has been crossed, that it's unacceptable and that there will be consequences? And what consequences will there actually be? One thing needs to be clear: we should never be silent in the face of hate, insults and threats. Rather, we must stand up to such behavior. And not on "equal terms," or by taking their "concerns and needs" seriously, or accepting their anger as "opinion." We can respond by criticizing their statements and picking apart the content. That requires courage, but if we don't summon it, attacks like these will only multiply and become even more commonplace than they are now.

Hasnain Kazim is a journalist and freelance author. He worked for the German news magazine Der Spiegel and Spiegel Online from 2004 to 2019, mainly as a foreign correspondent in Islamabad, Istanbul, and Vienna. Kazim was born in the German city of Oldenburg and is the son of Indian-Pakistani immigrants. He became a naturalized German citizen at the age of 16. Kazim currently lives in Vienna.