To strengthen access to information and the critical examination of the media, DW Akademie in Burkina Faso supports young journalists, media literacy for youth, and sustainable strategies for community radios. 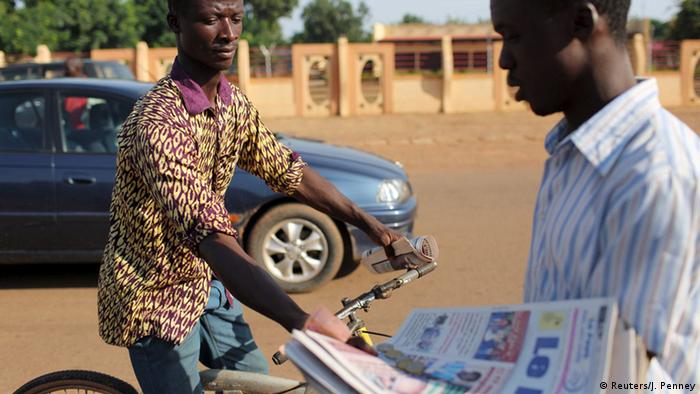 Burkina Faso's media landscape has changed since the popular uprising at the end of October 2014. Since the resignation and flight of the country's long-serving president, Blaise Compaoré, the media have begun to make use of their newfound freedoms.

In 2015, the then transitional parliament modified the press code. The new laws now include official recognition of the legal status of individual media outlets, tax exemption for press material and equipment, and an increase in state subsidies for both private and government-run media. The most important reform is the decriminalization of press offenses. However, the fines that were introduced in exchange for lifting prison sentences are so high, that they threaten the sustainability of national media organizations, limit freedom of expression and have led to continued self-censorship.

It remains uncertain as to how the media situation in Burkina Faso will develop under the leadership of President Roch Marc Kaboré, elected in December 2015. The precarious security situation in Burkina Faso makes the work of journalists difficult. In the run-up to the 2020 elections, the state authority for media regulation, the Conseil Supérieur de la Communication (CSC), has increasingly interfered in the work of media houses. The Ministry of Communication, for its part, does not always remain neutral. In addition, journalists continue to be poorly paid and for extra income depend on paid reporting.

Newspapers in Burkina Faso are read by only a small intellectual elite. Although Internet use is increasing, radio remains the most important medium, especially in rural areas. Large segments of the population – especially women and rural inhabitants – can still barely exercise their right to comprehensive and balanced information on public affairs.

In order to strengthen the quality of private and alternative media, DW Akademie in Burkina Faso focuses on young journalists and a long-term strategy for local and regional radio stations. Together with the youth organization EducommunicAfrik, DW Akademie is also developing a curriculum on media and information literacy (MIL) to counteract extremist propaganda and misinformation aimed at radicalizing young people.

DW Akademie's projects together with local radio stations aim to improve access to information, increase listener participation, and extend journalists' networks beyond national borders (Mali and Niger). Workshops are organized in cooperation with the journalists' network Réseau d’Initiatives de Journalistes (RIJ) and focus on conflict-sensitive reporting on issues such as terrorism or forced migration.

To improve the professionalism and sustainability of the country's media sector, DW Akademie is advising media companies on organizational and financial restructuring. To increasingly use local trainers and consultants from Burkina Faso, Mali and Niger as media trainers, DW Akademie is conducting specialized workshops that focus on conflict-sensitive reporting, mobile reporting and fact-checking.

A press study carried out in cooperation with DW Akademie reveals that women in the media have a hard time in Burkina Faso's male dominated society - even harder than in other industries. (29.01.2018)

During the September coup in Burkina Faso, journalists and the media were targeted by the presidential guard. DW Akademie and five other organizations express their solidarity with those upholding freedom of expression. (12.10.2015)

The civic uprising that ousted Burkina Faso's president in 2014 took many by surprise, including journalists. DW Akademie set up a gathering of German and Burkinabé journalists to talk about the outlook for the country. (14.08.2015)

On World Press Freedom Day, May 3, 2015, a new study was presented on the current state of freedom of the press in Burkina Faso. The situation has noticeably improved, but it is also clear that much remains to be done. (13.05.2015)