In recent years, governments have introduced dubious legislation to undermine digital rights. Technology is helping them to surveil and control their citizens. 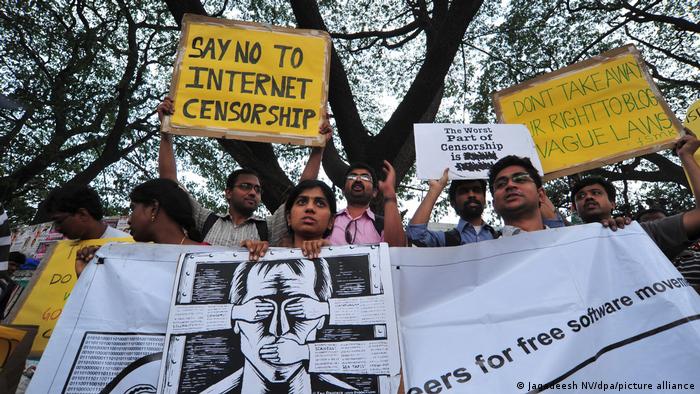 Protest against Internet censorship in India

When Vladimir Cortés first heard about Mexico’s new mobile phone legislation, he was reminded of the Israeli spyware Pegasus that notoriously targeted journalists in his home country. "This is a surveillance ecosystem. Pegasus was an illegal spyware, but this law is passed by the legislation here in Mexico." The so-called National Registry of Mobile Phone Users was implemented as a law in April 2021. When purchasing a new telephone line, users must provide proof of identity, proof of address, and biometric identification.

"The government is trying to collect biometric data from its own citizens and putting their privacy in danger," stated Cortés, who works as program officer for the international human rights organization Article 19 in Mexico. He has lately been busy campaigning against the new law, which gives no indication on how the government is going to collect the data – which includes facial recognition, iris of the eyes, fingerprints and signatures. Additionally, there are no transparent guidelines as to how and where the data will be saved. When asked whether the pandemic had any role in encouraging the Mexican government to pass this law, Cortés agreed that the recent COVID-19 pandemic did provide a valid excuse for the government to secure information that would otherwise be difficult. 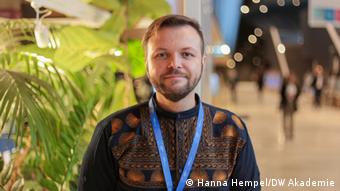 The National Registry of Mobile Phone Users in Mexico is one of the many examples of tactics being employed by governments worldwide to control information digitally. Digital authoritarianism, a buzzword in recent years, is mostly described as a way for governments to assert power and control information flows through digital tools and the Internet.

Authoritarian regimes like China are textbook examples that manipulate the Internet to advance their goals. This is done by facilitating an "authoritarian deliberation" that uses technology as a means of surveillance and control. Through a system of laws and regulations determining prohibited content online, countries like China have managed to seal their Internet from the world. This includes IP blocking, filtering of keywords and banning the use of VPNs. Additionally, China's surveillance network boasts of over 200 million cameras across the country. While on paper it sounds like a "smart-city" initiative with a "crime-controlling" mechanism, it is at its crux a constant surveillance system involving facial recognition, geolocation tracking, and collection of big data.

Many other countries adopted similar approaches towards their citizens, some with the help of China. For example, Vietnam adopted a similar cyber security law in 2019 after a series of trainings with Chinese officials. The Freedom on the Net report, the annual Freedom House study of 65 countries, found that global Internet freedom declined for the 11th consecutive year in 2021. The greatest descents were recorded for Belarus, Myanmar and Uganda, where state forces cracked down amid electoral and constitutional crises. Myanmar’s 14-point score decline is the largest registered since the Freedom on the Net report was established in 2009.

Resorting to authoritarian practices online has increased over the course of the COVID-19 pandemic, as emphasized in reports by Amnesty International and Freedom House. During the pandemic, 20 countries have extended or introduced new laws restricting online speech and more than 10 countries imposed internet shutdowns. In Venezuela, the government blocked websites from the opposition containing COVID-19 and general health information and arrested journalists. Similar actions happened in Egypt, Hungary and Zimbabwe.

Although democratic countries like South Korea, India and Ghana rank much higher in Freedom House's Freedom in the World index, they are rated significantly lower in the NGO's list of digital freedom. Most recently, Australia’s home quarantine application came under fire for its intrusive technology. By using facial recognition software and geolocation tracking, the Australian government enforced strict quarantine for citizens who "voluntarily" chose to isolate at home. And while the government released a privacy statement claiming that the collected information will be "destroyed at the conclusion of COVID-19", there is no clarity on when the pandemic will be officially over. 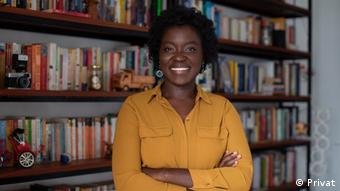 "We are in a vulnerable moment and survival requires cooperation and collaboration. But what we have seen with tech and the pandemic is that some governments have exploited tech, steering it towards general surveillance for its population," said Nanjala Nyabola, author and digital activist from Global Voices, a globally active digital rights organization. She is currently developing the "Unfreedom Monitor", a digital tool that explores how governments worldwide are using technology to curb individual digital rights.

In Nyabola’s home country of Kenya, Internet freedom declined during the pandemic, according to the 2021 Freedom on the Net report, with increased restrictions on online activities and arrests of bloggers. Surveillance practices are now being normalized and authoritarian actions like Internet shutdowns are becoming more frequent, according to Nyabola. "In some countries, if elections are upcoming, the Internet is going to be switched off," she added.

The need to raise awareness

Nyabola is however hopeful that, if citizens are well informed, practices of digital authoritarianism can be successfully countered. "You don’t have to be an expert in digital rights, but it helps to know what is happening in the world. Let your elected officials know that you don’t want to be tracked every time you go online," she concluded. In countries like Russia and China this might be quite difficult and dangerous, even though there are still activists resisting the overbearing system.

When asked how one can uphold their digital rights, Vladimir Cortés echoed similar views in a digital rights podcast: "Raise your voice on Facebook, Twitter, online. In Mexico, we create awareness through campaigns and providing information. We need access to justice and ensure that these technologies are not used against those investigating information for public interest."

“If elections are upcoming, the Internet's going to be switched off in some countries!”

The ”Unfreedom Monitor” helps to find a definition for some governments which control civic discourse. Digital activist Nanjala Nyabola from Global Voices knows how to respond.

Digital authoritarianism - only a few people are able to pronounce it right. And even less have an idea of what it is. One hint: It has to do with authoritarian regimes and the Internet. Click and take the quiz!