A radio network is trying to ease the difficult co-existence between refugees from South Sudan and host communities in Uganda. The country has become the largest refugee-hosting country in Africa. 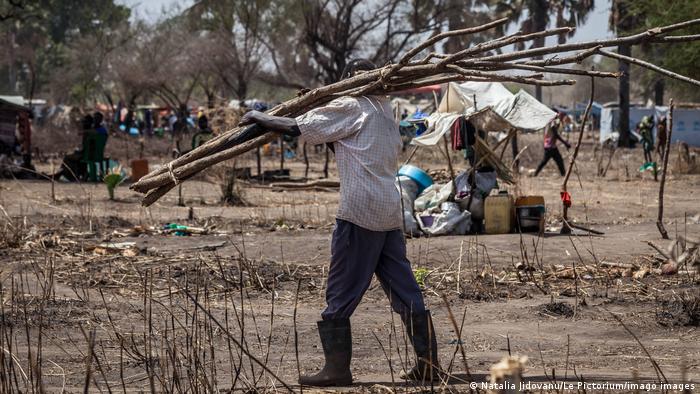 By Ochan Hannington* and Antje Bauer

Fiona Knight, 23, was on her way home one evening last January when suddenly, she became very scared. "My neighbors and I had gone to collect firewood," she says. "Without warning, some young people from neighboring communities came out of the bush, armed with bows and arrows. They threatened us, and we ran away. But they chased after us together with their dogs. We lost our slippers. And we came back with nothing."

It was not the first time Knight had been threatened since she and her family of three sought safety in the Rhino refugee settlement in Northern Uganda, after fleeing violent conflict in South Sudan. Over the past few years, hundreds of thousands of South Sudanese refugees have arrived in the country, building huts on government-allocated land. The former remote communities soon found themselves next to a refugee settlement that would assume the size of a city within a matter of weeks.

Initially, the refugees were well received. Uganda has one of the most generous refugee policies in the world. Refugees are allowed to work and move freely and are allocated a piece of land for their use. But inevitably, conflicts with the local population emerged. The conflicts are on tangible things such as farmland or firewood, which is essential for cooking. Both refugees and members of nearby communities gather firewood from bushland – a resource that's normally open to all. But in areas with a high concentration of refugees, vegetation disappeared within the first year. That means refugees like Fiona Knight have to walk further from their settlement to access bushland that is owned by locals. 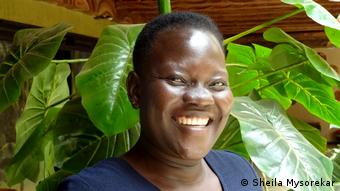 But conflicts are also about mutual misunderstanding due to different languages and a lack of communication. Through the Cross-Border Network (CBN), local radio stations from Northern Uganda and Southern Sudan have joined forces and have since been exchanging information and working together. "The vision is to be a professional network that informs and empowers communities across borders for peaceful coexistence," the network's Ugandan coordinator, Jane Angom, says. The CBN was formed in 2017 in Uganda during a meeting of journalists from Uganda and South Sudan which was supported by DW Akademie. The network includes 22 media houses and was put in place to increase communication and check rumors. Due to lack of resources, community radio stations on both sides of the border have often exacerbated the conflicts by broadcasting unverified information. "I still recall how anxiety increased throughout the refugee settlements, when we heard on the radio that Salva Kiir had died," says Fiona Knight, referring to the fake news about the death of the president of South Sudan. Jane Angom and her colleagues are not only aware about fact-checking, they also know about the power of language. Roaming livestock belonging to South Sudanese refugees are another reason for conflict: goats and cattle can destroy crops of the host communities

Angom recalls a fight after a football match between two youth. "We simply reported and said, two youth from different communities were watching this match and they ended up fighting. But other media houses mentioned the tribes of each of the youth, and that kind of reporting escalates the conflict because you are actually highlighting the rift further and adding to it," she explains. Also regarding storytelling, the CBN aims to encourage peaceful coexistence and stop conflict. "We try to establish how the issue of the refugees can best become an issue of interest to both sides," says Angom.

These initial successes underscore the significance of cross media cooperation radio in promoting dialogue and increasing access to information relevant to the daily needs and issues affecting the community. In addition to this, "dialogue committees" have recently been put in place in order to overcome the mutual mistrust. The committees comprise an equal number of people from both communities as well as a few "neutral" people from NGOs who operate within the refugee settlements. All members of the dialogue committees are elected, and the committees act as village courts for minor offenses.

This article was first published in DW's magazine Weltzeit.

*Ochan Hannington is a freelance journalist from South Sudan living in Northern Uganda. 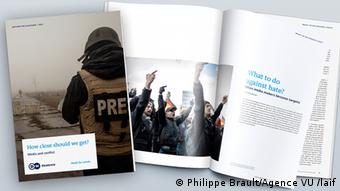 The original article “A field of maize, six grazing goats” has been published in DW Akademie’s new reader “How close should we get? Media and conflict”.

You will find more information in our #mediadev dossier "Media and conflict".

"Refugees and Migration in Africa" Project

DW Akademie supports the establishment of information services and feedback systems in refugee camps and fosters dialogue between displaced people and host communities.

Study: Media use among youth in Uganda

What types of media are used by the youth in Uganda? What are their information and communication needs? DW Akademie offers an assessment of the media habits of Uganda’s young people.