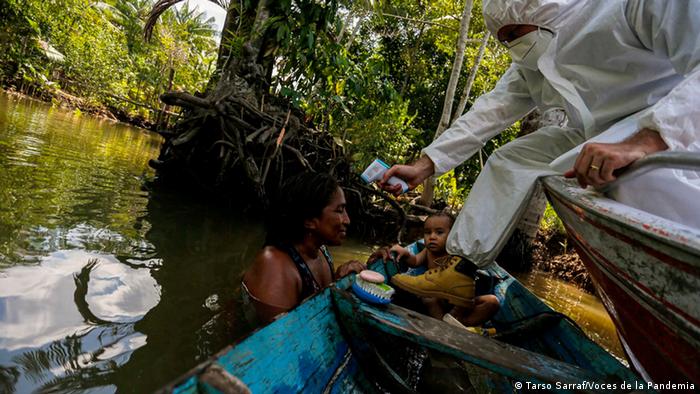 The COVID-19 pandemic plunged humanity into an abyss of questions and fear. While millions of people around the world were locked down, information about the world outside multiplied. Many tracked the progress of the disease, its severity, its economic impact, vaccine hopes and fears daily. Disinformation became a growing enemy for the communities of the Amazon basin. These territories are often ignored by the conventional media and are thus excluded from access to truthful and reliable information.

In order to fill this gap, DW Akademie brought together its partners in Colombia and the region, Hacemos Memoria, Servindi, Corape, Vokaribe, Consejo de Redacción and CRIC, under the Ríos Voladores (Flying Rivers) alliance. Its aim is to strengthen skills to promote quality environmental journalism and ensure compliance with human rights in the Amazon basin through joint journalistic products. This extensive collaborative project allowed DW Akademie and its local partners to react to challenges and develop initiatives, such as the platform Voces, to provide quality information to the most vulnerable communities during the pandemic and make their situations more visible.

DW Akademie's partners from the region Hacemos Memoria, a journalistic initiative from the University of Antioquia in Colombia, and Vokaribe, a community radio station in the southwest of Barranquilla, created the podcast series "Sin tapabocas" to monitor compliance – or violations – of human rights in the Amazon region during the pandemic. They handed the microphone over to the people of the region to share their struggles, from the lack of information in their local languages to restrictions of freedoms and the interruption of education.

The three seasons of this first initiative led to the creation of the multimedia platform "Voces" (Voices), which started compiling audio files, videos and images from the initial stages of the pandemic. It divides the testimonies into three chapters: freedom, equality and solidarity – the basic principles of human rights. The stories tell, for example, about how the Amazon entered the pandemic without a single intensive care bed, along with the effort made by communities to maintain their cultural roots despite the difficulties of the pandemic.

Voces de la Pandemia: A collection of testimonies about the impact of the COVID-19 pandemic in the Amazon basin

At that stage, more DW Akademie partners joined the project, including the news network Servindi from Peru, and the coordinator of Corape, a popular and educational community media outlet in Ecuador. An associate from Consejo de Redacción, an investigative journalism organization from Colombia, as well as independent journalists from Brazil and Bolivia also participated in this collaborative journalism effort to jointly compile voices and testimonies from even the remotest corners of the vast Amazon region.

Víctor Casas, general coordinator of Hacemos Memoria, highlighted the importance of joining forces to obtain such a rich compilation of human stories. "Each country has a different perspective and that is a challenge when developing the product, but also a learning experience," he said. "We heard testimonies from people in places we didn't even know existed. Seeing their needs is important."

Ríos Voladores is a project created with the support of DW Akademie and the German Federal Ministry for Economic Cooperation and Development (BMZ). Ríos Voladores is an alliance of media, academia and civil society organizations that promotes plural and intercultural debate on the defense of human rights and environmental protection in Colombia and the region. The alliance integrates DW Akademie's partners in Colombia, Ecuador and Peru, including Servindi, CRIC, Hacemos Memoria, Vokaribe, Corape and Consejo de Redacción.

The Amazon – The challenge of communicating diversity. The cases of Colombia, Ecuador, and Peru.

This study offers key data on the diverse characteristics of the Amazon region in order to better understand the communication processes there and identify the needs, best practices and perspectives for the future.

A lot of theater on the radio: How a radio novela helps against Corona