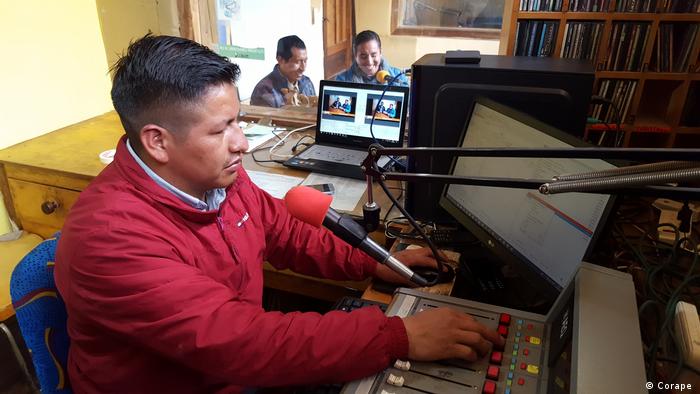 Deforestation of the rainforest, oil pollution and giant dam projects are threatening the environment and livelihoods in Ecuador, one of the eight countries in the Amazon basin. Maximizing short-term profits is set against the long-term needs of the local population. DW Akademie's regional approach strengthens the right to freedom of expression and access to information for disadvantaged groups. The projects focus on local actors such as journalists and community media plus environmental and human rights activists. Few have adequate networks to develop information strategies for battling nationwide problems such as climate change and the overexploitation of natural resources.

In Ecuador, exclusion and discrimination of large sections of society are the root of social and political conflicts. Indigenous peoples are hardly represented in private media. As a result, community media play a decisive role, acting as the mouthpiece for groups affected and fulfilling a necessary, democratic function. These days, community media reach their audiences not just via radio. The outlets are digitally equipped, operate their own websites and reach their listeners though various channels, including social media platforms.

In Ecuador, DW Akademie focuses on strengthening the community media sector and on promoting collaborative productions through media networks. Our local project partner is CORAPE, a media network that coordinates 36 community stations nationwide. The stations co-produce programs on relevant topics and can this way reach a wider audience. For the news format "Amazonía en Contacto", for example, Ecuadorian community media in the Amazon region jointly produce weekly radio reports on topics such as the careful use of environmental resources, cultural diversity and regional conflicts.

Local partners also receive journalism training that is not only reserved for journalists and media producers but for activists and representatives of indigenous groups as well. DW Akademie also creates forums that promote social dialogue on human rights, media, freedom of speech and press freedom.

As part of DW Akademie's Amazon Basin regional project, CORAPE contributes to the building of an alliance of journalists, environmentalists, community media and civil society organizations.

This publication presents the training procedures and best practices of the biggest network of community media in Ecuador and recommends eight steps and tools to help community media achieve viability.

13 indigenous community reporters from DW Akademie’s partner organizations participated in media conferences in Latin America. They told us how this has influenced their work and how they are adapting to the pandemic.

The Amazon – The challenge of communicating diversity. The cases of Colombia, Ecuador and Peru.

This study offers key data on the diverse characteristics of the Amazon region in order to better understand the communication processes there and identify the needs, best practices and perspectives for the future.

To what extent is there freedom of the press in Ecuador? How is the controversial communications law affecting media content and outlets? DW Akademie's new study offers an assessment of Ecuador’s media sector. (24.05.2016)

Open-source software offers Latin American community radios a new tool for exercising their right to freedom of expression, says journalist Santiago García Gago. He has been working with local radios for decades. (06.07.2016)

27 community radios in Ecuador are applying for new licenses. Community media are to make up one third of the media outlets - and bring greater diversity to the country's media sector, says DW Akademie's Mirjam Gehrke. (27.05.2016)

At the launch of the workshop series "Bajo la lupa" indigenous journalists looked at how to systematically analyze the media. The series is a joint project by DW Akademie and the GIZ's "Pro Indigena" program. (31.03.2014)