Although mobile phone ownership is booming, women in developing countries are still less likely to own a mobile. A new report highlights some strategies for connecting women. 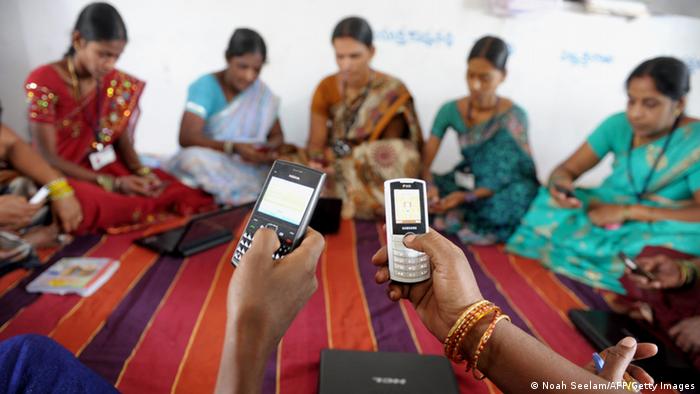 Mobile phones are helping more women in the developed world to access health, education and employment services than ever before. Nine in ten women also say their handset helps them feel safer. But despite the incredible growth of mobile uptake in emergent nations over the past decade, two billion women remain without access to the technology, according to a new report.

"Connected Women 2015: Bridging the gender gap", which was recently released by the international mobile operators' association, GSMA, found women around the world were, on average, 14 percent less likely to own a mobile phone than men. This gap increases to 38 percent in South Asia.

"Access to this life-enhancing technology is restricted due to cultural norms and beliefs which, along with other barriers such as affordability, ultimately result in hundreds of millions fewer women than men owning mobile phones in low- and middle-income countries," said Claire Sibthorpe, Director of the organization's Connected Women program.

Egypt, India and Jordan are cited in the report as countries where access to phones is often restricted due to fears about interaction with men outside the family.

In many regions, women are also often less educated or have limited control over spending than men, which also results in a lack of access to mobile and the internet, Sibthorpe told #mediadev.

The GSMA report found five key barriers to women not owning a phone:

Where operators have adapted their business model to the needs of women, their subscriber base has increased significantly. In Somaliland, where per capita income is less than 312 euro ($350) a year, Telesom ZAADlaunched a mobile money service which saw nearly 140,000 women register for the first time to the basic banking services through its GSM network.

His and hers SIM cards

In India, mobile operator Uninor offered combo-SIM cards – typically one for the husband and the other for the wife. Its marketing campaign promoted the benefits of couples and families being able to stay in contact in case of emergencies.

"This ensured that, out of every two subscribers acquired, at least one is a woman and Uninor has recruited a network of local female ‘promoters’ to market and sell this product, as these women are trusted community members," Sibthorpe said.

Mobile technology has helped millions of women from the poorest backgrounds gain employment or start their own businesses. As income levels rise, women's independence levels rise and their phones become indispensable tools for continued success. For example, in Nigeria, the 'Business Women' service offered business tips and training delivered by SMS to female entrepreneurs. After reaching 70,000 women there, the service was rolled out in Indonesia and Tanzania.

With harassment a major issues for many women in the developing women, operators can offer more protection services – from call blocking for nuisance calls and emergency services tailored to women's needs. GSMA says many mobile network operators don't even track the gender composition of their subscriber base. Until they do, they won't be able to monitor women's usage of mobile technology and understand how to target them better.

Address the issue of inferior handsets

Women often don't make mobile purchasing decisions alone. Regularly, they end up with hand-me-down phones or inferior handsets, which means a large gender gap has also opened up in mobile internet access. Micro finance opportunities exist to allow women to buy newer handsets that come with online access. Non-profit organizations are also being encouraged to offer phones to the receivers of their grants.

The report also called for further research into the direct and indirect links between female mobile phone ownership and increases in families' economic circumstances.

Who benefits from the global media revolution?

#mediadev talked to a range of people from diverse backgrounds and countries about how and why they use media. Here's what these conversations illustrate about global media trends.