The voice of the Rohingya refugees

People wait hours for food, elephants invade the camp and a wedding is celebrated. These are stories from the Rohingya camp in Kutupalong in Bangladesh. DW Akademie trains Rohingya refugees to work as camp reporters. 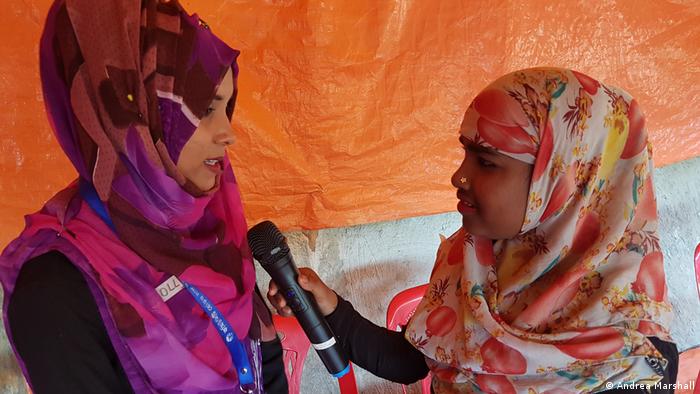 Spoken word is the best way of telling stories in Kutupalong. An estimated 70 percent of Rohingya are illiterate.

It was shock when an elephant invaded the refugee camp and killed a 12-year-old boy. How can the camp's inhabitants protect themselves if more elephants appear? The newly built huts on the edge of the camp happen to be on the elephants’ path. People queue up for hours in scorching heat for rice, lentils and oil. What's on their minds; what are they thinking about? And then, there are missions like, how does one celebrate a marriage in dignity here, in this inhospitable environment, when two young refugees decide to tie the knot? 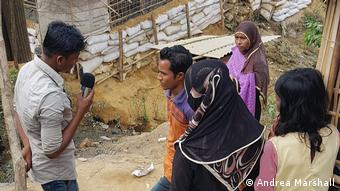 An aspiring Rohingya camp reporter during an interview.

These are the narratives that move the people in the camp. DW Akademie’s trainers want to make these stories heard among the refugees. DW Akademie supports the community radio program in the world's largest and most densely populated refugee camp. According to UN estimates, more than 680,000 people live in this and the neighboring camps. They have been persecuted and abused in the border region of Myanmar. They were forced to witness soldiers killing neighbors, friends and relatives and subsequently fled across the border with their belongings. New refugees arrive almost every day. 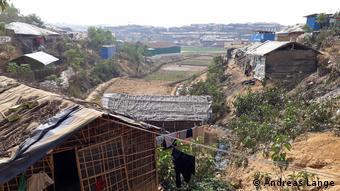 A view of the makeshift huts in the camp of Kutupalong.

Giving back a piece of identity

In mid-March the first community radio workshop by DW Akademie for young Rohingyas took place. It was full of challenges. Young refugees were supposed to be put in the position to report on life in the camp in cooperation with Radio Naf, the only community radio station in the region. Although the world learns details about the plight of the Rohingya, everyday stories about the people themselves are not told.

The spoken word is the best way of telling these stories. An estimated 70 percent of Rohingya are illiterate. Almost none of the Rohingya women can read or write and they are timid, silent and hide when addressed directly. Some have never listened to the radio or attended classes in their lives. How can you teach these people to produce radio stories?

In practice, many things turn out to be easier than expected. The Royinga participants were very willing to learn new things. The men who could read and write a little came out of their reserve quickly and attracted others. The Rohingya women were encouraged to participate by the Bangladeshi women in particular. The people in this region speak the same dialect, which makes working together considerably easier. The trainers' English instructions had to be translated. 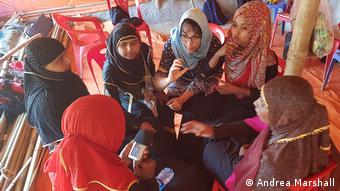 Rohingya and locals learn together, how to tell the stories from the camp.

Half of the course participants are refugees and the other half locals from the surrounding region. The locals work as volunteer reporters for Radio Naf and organize listener clubs. They too shall benefit from the training and assume a mentoring role for the refugee reporters. The exercises and stories are researched and told in mixed reporter tandems. This makes for dynamic training and ensures a high level of acceptance for the training inside and outside the camp.

Exercising in the sweltering heat

The most important task for the participants of the workshop is to develop a feel for different topics – apart from major conflicts. That is why the trainees are also encouraged to produce entertaining plays, like a portrait of a musician, or a discussion between a grandfather and grandson about what the grandfather views as an inappropriate new hairstyle. In these exercises, the joie de vivre these people have maintained shines through, despite all the dramatic circumstances that have led to their flight from their homeland.

The training venue poses many challenges. The workshop is in a tent made of bamboo sticks and plastic tarpaulins. During the day it is extremely hot in the tent. But the exercises during the break prove to be refreshing. Arm rowing exercises, squats and lateral stretching went over well with the participants. 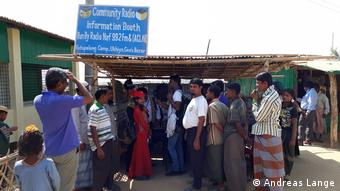 An information booth of "Radio Naf" in the refugee camp in Kutupalong. DW Akademie is cooperating with the local citizen radio and trains refugees, as well as locals.

Not a single piece of free land

A new training venue must be found for the next workshops. But there is a lack of space in the camp. Tents or houses were set up immediately, but there are no longer any vacant plots in this now extremely densely populated camp. It is a problem many organizations are struggling with. But as in radio, sometimes improvisation helps. And there's still some time left before the next training session begins.