Tackling the complex problem of aid: an interview with Ben Ramalingam

There needs to be a creative transformation of how aid works, says development researcher Ben Ramalingam. And understanding that societies are dynamic and complex must be at the heart of that change. 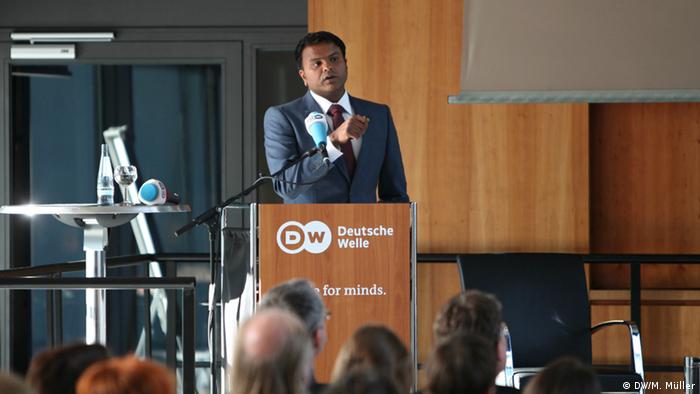 Ben Ramalingam is an researcher and development consultant whose book, Aid on the Edge of Chaos, captured widespread attention in the development world when it was published in 2013.

Ramalingam believes that international organizations and policy-makers working in the development field have long taken an oversimplified view of complex problems. In his book, he explores how scientific ideas of complexity theory and systems thinking can be applied to make aid more relevant.

Speaking to #mediadev while in Germany for the 2015 Forum Media and Development (FoME) symposium, Ramalingam explained that he came to complexity sciences as a way of thinking about aid problems from 15 years of working in aid in different settings – at an operational level, at a policy level, and at a research level.

He found there was a “fundamental mismatch between the way international organizations see the world in their policies, in their projects, and in their programs, and the way the world actually is,” he said. He says those working in development need to start seeing societies and systems 'on the edge' as spontaneous, adaptive and alive.

#mediadev: Why the reference to aid being on the edge of chaos? What kind of image is that meant to conjure up?

Ben Ramalingam: 'On the edge of chaos' can seem like a negative thing. As though aid being on the edge of chaos is problematic because it means it is turbulent and it is on the edge of catastrophe. Actually, it's a scientific term which I drew upon, and refer to throughout the book, which is about systems that are optimally poised for change.

So the metaphor is that you can have different kinds of systems, a little bit like the states of matter. You can have some systems that are like solids – things are pretty much fixed in place.

At the other end of the spectrum you've got systems which are like gasses, so it's completely chaotic and random. In the middle you've got liquid systems, which can be contained. They've got certain things that stay constant but then there's a lot of change and flux and shift within that.

And when you apply that metaphor to societies, you can see that actually, many societies that are undergoing change are also in a liquid state. They're not too rigid, they're not too chaotic, they're somewhere in the middle.

The idea of aid being on the edge of chaos was that aid needed to find a way of positioning itself so it could foster and facilitate and enable the kinds of changes that need to happen in developing countries. Not trying to overly control them, not trying to be completely chaotic, but finding that middle point.

When we look at the role of media, is there a place for complexity theory, particularly when we're looking at issues such as accountability or the role of the media as a watchdog, supporting freedom of expression and access to information?

There have been some really interesting applications of complexity sciences within different aspects of media – using social network techniques, for example, to understand how media can bring in new users or reach new actors that might otherwise not have been reached. Or to collaborate and to cooperate with each other in new ways. And then there's the bigger picture, which is around how media development contributes to better societies. And I think there are some really useful approaches that can be used, such as systems thinking.

Taking a systems lens on the media system, understanding how press freedoms can influence other parts of the institution and how that can lead to greater development. I think those are questions we're not really answering very well at the moment. And I would argue that complexity theory and some of the specific tools could help.

Maybe you can give some practical advice to media professionals in their day-to-day jobs. How can they identify situations where complexity theory can help them, and what sort of methods can they use?

Making sense of different problems is always the first step in any endeavor. And one of the first things to do would be to see whether or not the problem that you're working on is indeed a simple problem, a complicated problem, or a complex problem. Let me give you examples of all of those.

So a simple problem, by analogy – and this is one that's been used quite a lot in social complexity theory literature – is a little bit like baking bread. You find the ingredients, you put the ingredients in the right way in the right sequence, you knead it, you put it in the oven and unless you're a terrible cook, you've got a reasonably good chance that you'll get reasonably good results all the time. And those are for simple problems. And there are certain problems which are indeed simple, like vaccination for children. You can argue that getting children vaccinated for measles is a fairly simple problem. We know it works, we know it's about getting coverage rates, and it's about ensuring that you apply that recipe.

Then you have complicated problems. They aren't as straightforward as getting a recipe. It requires planning, it requires anticipation. A good example might be trying to put together a bridge for a highway. Infrastructure projects are good examples of complicated problems. So you've got an engineering basis for the problem, you've got a certain amount of numeracy that you need to use, you need to understand how many vehicles are going to be moving over it, you need to understand all kinds of things like the load-bearing, materials you should use and so on. So it's like a whole series of simple problems put together. The challenge is about defining those multiple simple problems and getting them right. And sequencing them in the right way, and coordinating between the whole, ensuring effective communication.

There really isn't a recipe. There isn't a straightforward answer. And it's not necessarily about strategic planning. In those settings, and when those things have successfully happened, it's because people have experimented in many different ways. They've tried lots of different things out. And they've had a system whereby they've been able to experiment in a robust way, and see what's successful, and scale up the things that seem to be working and leave to one side the things that aren't.

One thing that media development organizations probably need to think about is that there's a lot of people in media development who are journalists, they're creative types, they're entrepreneurial, they've got a lot of zeal, they've got a lot of energy. And creativity is seen as in some way antithetical to rigor. So rigor is for simple problems, rigor is for accountants, and creativity is what I do and I'm going to go out there are be creative, and don't ask me to prove what I do. And I think that, actually, media development professionals need to think about how creativity and rigor can come together. That's the real golden egg. Don't be afraid of questions of rigor. Actually see how that can help you be more creative.

It's widely recognized that the traditional model of aid is changing. The question is, how do we mobilize top decision-makers, particularly politicians in developing and developed countries, to accept the complexity theory and, in the process, really influence how aid is used and change how we think about aid and how we work with it?

It is important to be able to use policy makers' language and ideas and find a way of bringing the principles into play. I don't think a policy maker needs to understand and embrace and have a deep grasp of complexity theory. I think the key is that they need to accept that aid needs to be more anticipatory, more adaptive, more networked and more relevant to the people that we're trying to help. And all of those things can mean all kinds of technical changes and institutional changes. But as long as people are seeing aid, as long as policy makers are seeing aid as a way of shoring up western influence, as a way of maintaining existing power structures, of allowing countries in the south to get empowered and developed, but not too empowered and not too developed, then I don't think these ideas are going to wash.

What are some of the questions people in media development should be asking to make their work more efficient?

There is a bit of a challenge, or a bit of a discrepancy, between the two worlds of media development. You've got people that are increasingly working in media in development projects, where media is being used to achieve specific development project goals. Take the example I talked about earlier – you want to change people's attitudes towards HIV/Aids, so you develop a soap opera, and you instrumentalize media within development programs. And then there's the other piece, which is about how media can actually bring about changes in society as a whole, how it can be a set of values and a set of ideals that enable us to reach a higher form of progress and development.

One of the challenges is that those two things aren't really fitting together very well. One of the things that complexity theory does is it says those bottom-up things that are happening and that high-level goal, they're interdependent. You can't just say, we'll forget about that bigger goal whilst concentrating on this small thing.

So there's something about the people that are working on media in development moving beyond that instrumentalized approach and looking at the bigger system. And there's something about the people that are pushing for those bigger changes to try and understand the bits of media in development that can really work and contribute to that goal, and in a sense accepting that media development is in itself a fragmented system which needs to become more cohesive.

Ben Ramalingam is a Research Associate at the Overseas Development Institute, a UK think tank on international development and humanitarian issues. He is also the author of “Aid on the Edge of Chaos” (OUP, 2013).

How effective is media development? Renowned media experts and researchers gathered at a recent symposium to tackle just that question, taking a critical look at their own work and discussing new approaches. (14.10.2015)

FoME wrap-up: Cooking up a storm in media development

At the 2015 FoME symposium, DW Akademie's head of strategy and consultancy Petra Berner came away with some important lessons that media development can learn from the art of cooking. (07.10.2015)

This was FoME Symposium 2015

A big thank-you to the participants of this year’s FoME symposium, hosted by DW Akademie on October 1 and 2 in Bonn. Get a glimpse of the conference on #mediadev. (02.10.2015)