Reporters at the TV show "Yalla Nehna" for Syrian children are receiving support in the form of training and consulting. DW Akademie's workshops for video journalists are funded by Germany's Federal Foreign Office. 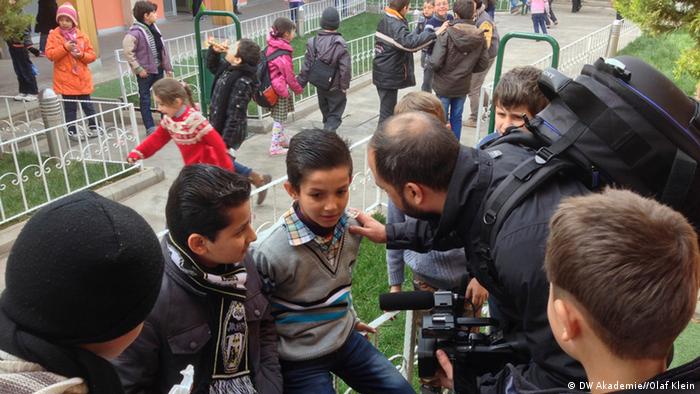 Last year DW Akademie and the moderate Dubai-based Syrian opposition channel Orient TV developed the concept for a new children's magazine-style program called "Yalla Nehna" ("Let's get going"). Aimed at Syrian refugee children it was produced in just three-and-a-half months, went on air in March and now broadcasts twice a week to an enthusiastic young audience. The 30-minute program shows the children a world that's far removed from war and destruction; it contains informative, child-oriented reports that focus on education and science, along with entertaining components.

Orient TV would like to further develop the program. "With more correspondents in the region it'll be easier to portray the world of the refugee children," says Tilman Rascher, head of DW Akademie's Middle East Division. Over the next three months DW Akademie will be training an additional eight Syrian citizen journalists in developing new formats and producing child-oriented reports. "We'd like to enable Orient TV to produce reports together with Syrian children," says Alican Emre (name changed by the editor), DW Akademie trainer and project manager. To date, "Yalla Nehna" has only adapted German children's TV reports.

In 2013 DW Akademie trained nine Syrian citizen journalists to become correspondents for the program. "Still, given the shaky situation in Syria and neighboring countries, it can sometimes take days before video journalists can start production," points out Emre. The new set of journalists is currently based in Dubai, Turkey, and Lebanon. DW Akademie will again be holding the workshops in Dubai.

It is important that refugee children realize there are alternatives to conflict and violence, points out Birgitta Schülke who is running the project together with Alican Emre. "The relentless violence shown on TV means that children constantly re-live their own traumatic experiences," she says. "'Yalla Nehna' shows positive examples of how problems and conflicts can be resolved."

The Munich-based International Central Institute for Youth and Educational Television (IZI) is supporting the project team with consulting services.

Just before the show went on air in March, "Yalla Nehna" received a prize for outstanding achievement in children's television. The award was given by one of the most important European children's film festivals, Prix Jeunesse.


A new round of training and consultations for video journalists at "Yalla Nehna" gets underway in mid-November 2014. The project is funded by Germany's Federal Foreign Office.

The civil war in Syria has left many children severely traumatized. Project manager Birgitta Schülke reports on how a new children's TV show is aiming to bring a touch of normality back into their lives. (12.03.2014)