And the winner is…DotMap! The 10,000 euro top prize for DW Akademie's MEDIA LOVES TECH competition in Tunisia went to developers of an interactive data visualization tool for journalists. 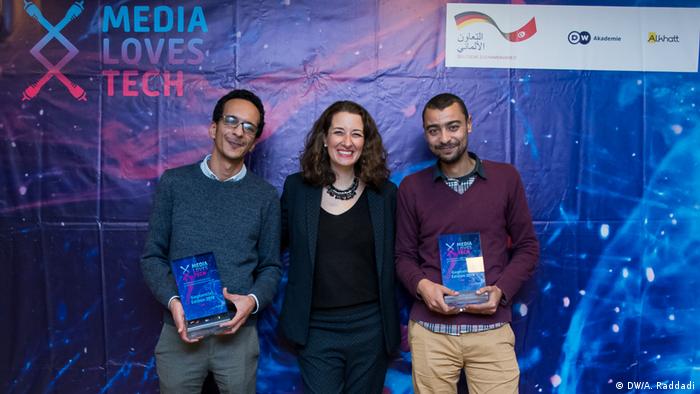 Things were getting increasingly exciting at the 2018 award ceremony held early December in Tunis. More than 60 Tunisian teams had entered the startup competition focusing on innovative digital solutions for quality journalism. Ten teams had made it to the second round and the winner was about to be announced.

The MEDIA LOVES TECH project is aimed at linking Tunisia's startup scene with journalism – two worlds that to date have had few connections. The idea is that startups' technological innovation, interdisciplinary work and entrepreneurial mindset can foster good journalism.

The first prize went to "DotMap". Two Tunisian computer scientists had developed a functioning prototype for an easy to use, interactive and open source data visualization tool. The tool makes it easier to read data through mapping. This means Tunisian users can more easily visualize and understand data used in journalism. Only large media houses have so far been able to afford data visualization but DotMap is available for freelancers and small media outlets. 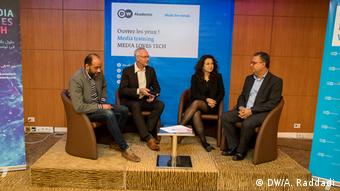 Bernd Rößle, DW Akademie's Country Manager for Tunisia and jury member, was impressed by the innovative tool. "It functions like a plug-in, so it's versatile and makes collaborative work possible. It's helpful, for example, for journalists doing investigative work as a team," he said.

Surprise at the award ceremony

DW Akademie and its Tunisian partner Al Khatt, an NGO promoting investigative journalism in Tunisia and also involved in the Panama Papers, had a surprise in store. The jury had felt three other projects were also worthy of a prize and awarded the teams 2,000 euros each. 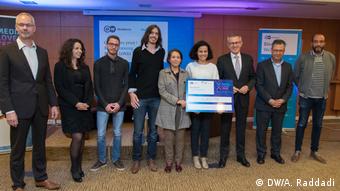 Members of the Editorialy team with their prize. Three teams were awarded second place

Editorialy was one of the runners up.  The content platform uses a specially developed algorithm to display journalistic products according to the user's interest profile. The team also plans to develop a fact-checking seal of approval showing that it only offers copyrighted content.

Also coming in second was VstoRies, a platform for virtual reality and 360-degree content. The platform aims to make it easier for media houses and journalists to access its technical and narrative content. The prototype is user-friendly with an interface that enables amateurs to produce as well as consume the new narrative forms. 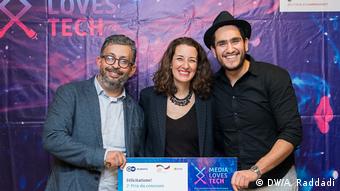 Crowd-sourcing for warning system for the environment 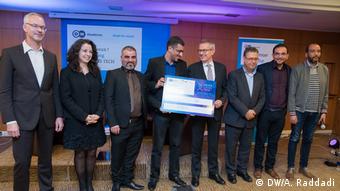 Also awarded second place were the developers of Rakib, a crowd-sourcing warning system for environmental dangers

Germany's ambassador to Tunisia, Dr. Andreas Reinicke, was impressed by the various inventions but also pointed out that they could only benefit journalism if investigative and responsible journalists actually used them. Otherwise, he said, "they would be of little use." Reinicke learned more about the prototypes and presented the prizes.

Continued support for the winning teams

"We're pleased this project established itself so quickly in Tunisia," said DW Akademie project manager, Vera Möller-Holtkamp. "This is Tunisia's first startup competition in the media sector, and it was new for us, too. Innovations abound here and there's a great interest in improving journalism," she said. DW Akademie, she added, would continue to support the award-winning projects.

So DW Akademie's MEDIA LOVES TECH adventure in Tunisia isn't over. All four teams will continue to receive support from Al Khatt's new media incubator, and B@labs with its incubator and accelerator, has offered to support the winners with a free, months-long program. That was yet another surprise for the winners of the competition.