Philanthropists must fill the gaps

Private foundations can be part of a rescue plan for economically stricken media outlets. But like all forms of funding, this carries with it a set of implications, says media scholar Martin Scott. 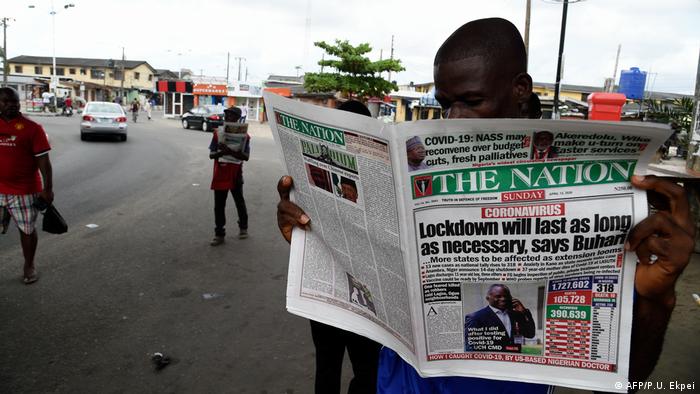 A man reads a newspaper at a newsstand in Lagos to know more about the extended lockdown as part of measures to prevent the spread of COVID-19 coronavirus. Across the globe, media outlets face economic challenges in the wake of the crisis.

#mediadev: While public interest media organizations struggle to sustain their business models, private foundations fund journalism with hundreds of millions of U.S. dollars every year. But foundations have their agendas. Dr Scott, can journalism funded by philanthropy ever be independent?

But there are also foundations that are very issue-based, seeking to advocate for a particular cause. That's where there are more likely to be potential problems, because perhaps they're seeking to fund journalists to only cover specific stories that interest them, or in ways they want them to be covered. In those circumstances, then there can be a threat to journalistic independence.

What our study [Link] shows is that, in a vast majority of cases, journalists are very willing to say "no" and not accept grants that would impinge on their editorial freedom. And many foundations do understand these things as well. Most of the time, foundations and journalists reach an agreement about the general subject area they should be covering—that doesn't threaten their independence.

Are there best practice examples when it comes to private funding? 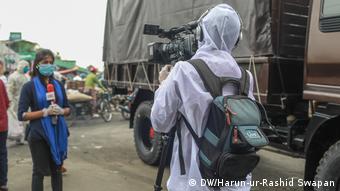 A camera Journalist in the field in Dhaka, Bangladesh

Organizations like the Journalism Funders Forum, Media Impact Funders and the European Journalism Centre have established guidelines and best practices for supporting journalism. That includes things like providing core funding, rather than project-based funding, wherever possible. So, to fund the running costs of a news organization rather than to tie funding to any particular subject or topic. But that's not always possible for some foundations because they might have a particular concern for a subject area like climate change or human rights. Sameer Padania has written an excellent introduction on this topic from the perspective of foundations. It includes sections on the rationale for funding journalism, advice from experienced donors and specific areas of opportunity and threat.

Where do you see challenges?

One issue we found in our study, is that foundation funding is inadvertently turning a lot of small news organizations into looking more like NGOs, because they have to devote a lot of their resources to building relationships with foundations, reporting on their grants, evaluating their grants, and promoting themselves to get funding. This can distract them from spending time producing good journalism.

Another tension our research highlights is that, when securing funding, it can be quite hard to know which foundations are giving support, how they're giving it, and what their priorities are. It can often take a long time to understand this and to network, to get to know the foundation scene and build relationships with them. The consequence of this is that the larger news organizations—with well-established brands and networks—are often the only ones getting the funding, and the smaller organizations don't. This can lead to a concentration of funding in a small number of outlets.

What could be done about that?

One good practice is for foundations to fund journalists via intermediaries. There are plenty of intermediary or re-granting organizations that accept funding from foundations and then act as journalistic intermediaries to decide how that money gets distributed. For instance, the European journalism Center, the Pulitzer Center on Crisis Reporting, and several others.

What could public donors, for instance in official development aid, learn from the experience of private foundations’ funding?

Each one, private and public funding, has its own advantages and disadvantages. Government support for journalism is often longer term and can cover core costs, whereas funding from private foundations has been accused of being less sustainable and more subject to the whim of the foundation—so if circumstances change, funding can be cut unexpectedly. However, there is also a sense that private foundations can be more experimental.

The current crisis has made things even more difficult for public interest media. Could private foundations provide sort of a lifeline for struggling outlets? 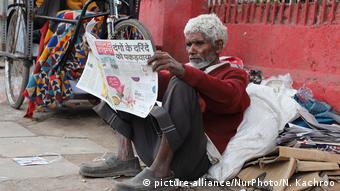 A man reads a newspaper in Old Delhi, India

Particularly with COVID-19, it is vital that philanthropists, where they're able, step up to help fill those gaps. There are so many appeals for funding to help support journalism right now. The overriding issue is that journalism is in an economic crisis, and foundations do have an important role to play in beginning to address that. But when they do, there are a series of issues to be mindful of—protecting journalistic autonomy at all times, not defining the kind of journalism or the subject areas or the impacts that you would like to see too tightly. And to go via intermediaries where possible whilst also not making the application process or the reporting process for the grants too time consuming.

What do you think of the idea of an International Fund for Public Interest Media, as it has been suggested recently?

The key issues are around whether or not it can generate new money and whether it's right that decision making is concentrated in one place. But if they can successfully address those questions, then it's certainly a welcome initiative.

What about other approaches?

A particularly welcome approach is the Independent News Emergency Relief Coordination, or INERC, set up at the Reuters Institute. It is supposed to give advice to donors, mostly philanthropists, but also Facebook, Google and others, about where would be the most effective place to put their money. I think that's a fascinating initiative which is trying to lead with data to help offer informed donor decision-making. I think that's an excellent idea.

Do you have some kind of conclusion after years of research on the topic?

Journalism was already facing an economic crisis. That economic crisis is now compounded by COVID-19, at a time when we need journalism even more. Therefore, funding from private foundations is incredibly important. But like all forms of funding, it carries with it a set of implications; around journalistic independence, around a concentration of funding, around who makes these decisions and around inadvertently shaping journalistic norms. So the point is not that foundation funding is inherently a better or worse way of supporting journalism. But that it has its own unique set of tensions and issues around it. And these need to be understood. Thankfully, there is a growing body of research in this area—which we’ve tried to summarize in a recent report—and there are several organisations and publications providing guidance to both journalists and donors. 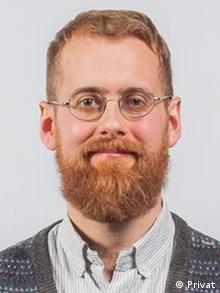 Dr Martin Scott is a Senior Lecturer in Media and International Development at the University of East Anglia in the UK. He is the author of Media and Development (Zed Books). His research into foundation-funded journalism has been co-authored with Dr Mel Bunce and Dr Kate Wright. Their most recent research into 'Foundation Funding and the Boundaries of Journalism', recently won the 2020 Wolfgang Donsbach Award for the Most Outstanding Article. More details about their research in this area can be found here.

Media Viability: New indicators show what is at stake

Media development amid the coronavirus crisis