Dunia Bader reports for young Palestinians from the front line on the streets of Jerusalem. The student is part of the editorial team of the online portal "Qudscom" - the new young voice in Jerusalem's media landscape.

The conflict is playing out right around the corner. But Dunia Bader doesn't intend to take any chances. She gets some final instructions from her editor in chief, slings her camera equipment over her shoulders and heads out to the streets of Jerusalem. The 21-year-old is a reporter for the Palestinian online portal, "Qudscom" or "Your Jerusalem" and she reports about and for young Palestinians in her city. About 70 percent of the population of Jerusalem is under the age of 18, but young people are barely represented in the media.

Dunia Bader has been assigned to do a story about imprisoned Palestinian minors. Qudscom's editorial office is just a few meters away from the Damascus Gate, which leads to Jerusalem's Old City. After Friday prayers, it's often the scene of clashes when Palestinians demonstrate against the presence of Israeli soldiers and for unimpeded access to the holy sites.

A journalist caught between two fronts

Among the demonstrators there are a lot of minors, who are being arrested by Israeli soldiers for throwing stones, among other things. The human rights organization B‘Tselem estimates that more than 400 young people are currently being held in Israeli military prisons (figures from February 2016). 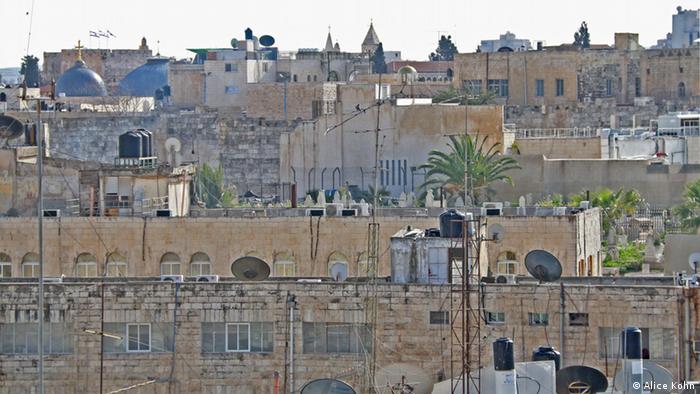 The view from the Qudscom office

That's meant to be the focus of Dunia's story, but going to the demonstrations would be too dangerous for the journalism student. In any case, she says, the Israeli soldiers would stop her from getting anywhere close. So the young reporter has to find a different approach to gathering material for her story.

Qudscom has made it its mission to report on social, cultural or family-related topics that concern young people in Jerusalem. Perhaps inevitably, the politically charged situation in the Middle East also has an impact on the local media. The NGO Reporters Without Borders ranks the Palestinian Territories 132nd out of180 countries on its World Press Freedom Index. Journalists here are having to battle on a number of fronts.

On the one hand, Israeli security forces routinely try to prevent Palestinian reporters from doing their job, blocking their movements, seizing their material or simply arresting them. On the other hand, the Palestinian secret service watches them closely. If they criticize the government or report about corruption, they risk being arrested on charges of treason. 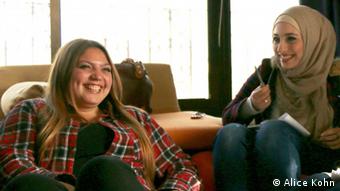 Dunia Bader and her colleagues have had to find ways of coping with this situation since 2015. Qudscom is one of the first media projects undertaken by the youth organization Palestinian Youth Vision, supported by Deutsche Welle's media development organization, DW Akademie. "I see it as my mission to give something back to my country by telling the world what's happening here," says the bubbly young reporter.

Does that call for a great deal of courage? The 21-year-old says that, above all, you have to be creative and think on your feet. A locked-up journalist is no good to anyone. So she decided to make her report, not about the arrests, but about young people who had been released from prison: Why were they arrested? How did their time in an Israeli prison change them? "This way, I can give the topic a personal face," says Dunia Bader, "and I can also manage to keep myself safe."

"I look out for my colleagues"

Ahmad Al-Bazz is a Palestinian photo and multimedia journalist and his pictures help fight for freedom of expression in the Middle East. A graduate of DW Akademie, he uses his camera to document attacks on journalists. (14.01.2016)

Palestine: Having their say

Encouraging young Palestinians to ask critical questions and voice their opinions has rarely been a priority in the classroom. But new school media groups are now showing youths ways to express their views. (10.11.2015)