"I look out for my colleagues"

Ahmad Al-Bazz is a Palestinian photo and multimedia journalist and his pictures help fight for freedom of expression in the Middle East. A graduate of DW Akademie, he uses his camera to document attacks on journalists. 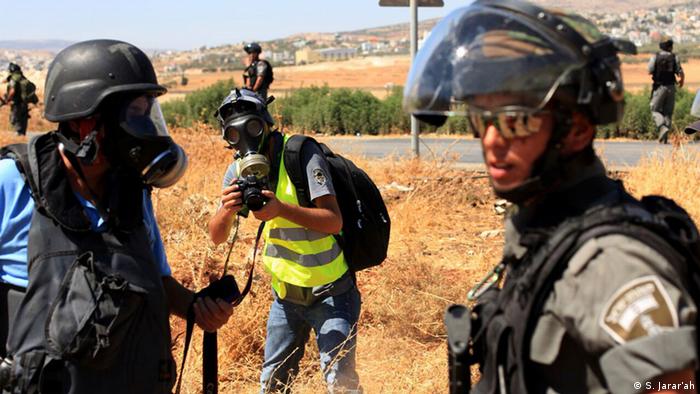 The scene that Ahmad Al-Bazz captured on film in September 2015 was to have far-reaching legal repercussions. The 22-year-old journalist went to the checkpoint at Beit Furik in the West Bank to report on a demonstration. Instead, he found himself filming an attack by Israeli soldiers on two journalists working for the AFP news agency. "One of the soldiers suddenly grabbed the camera off one of the journalists, smashed it on the ground and threw the pieces into the ditch at the roadside," recalls Ahmad Al-Bazz. Afterwards, he says, the soldiers physically attacked the two journalists, another camera was destroyed and the memory cards containing the journalists’ pictures were confiscated. 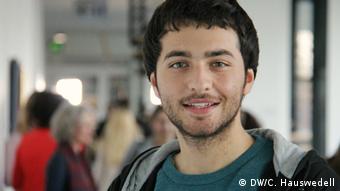 Ahmad’s video clip of this violent attack on press freedom quickly went viral on social media. The British daily The Guardian even used the clip in its own reporting. "Two soldiers were temporarily detained and the Israeli military was forced to replace the destroyed equipment," says Ahmad, glad that he was able, in this case at least, to help achieve a small victory for justice.

Ahmad is concerned, however, that all too often the attacks on press freedom and freedom of expression in the Middle East are not publicized and therefore remain unchallenged. The young Palestinian has been working since April of last year as a cameraman, photographer and editor for the production company Palmedia. He says that the best defense against intolerance and violence against journalists is vigilance. "I always look out for my colleagues, to document attacks or violence," says Ahmad, who lives and works in Nablus in the West Bank. In 2012, the media graduate joined the photographers’ network activestills.org. This alliance of Israeli, Palestinian and international photographers wants to sweep aside the curtain of secrecy that hides human rights abuses against both journalists and civilians. Working as a freelancer, Ahmad provides the organization with pictures and stories. 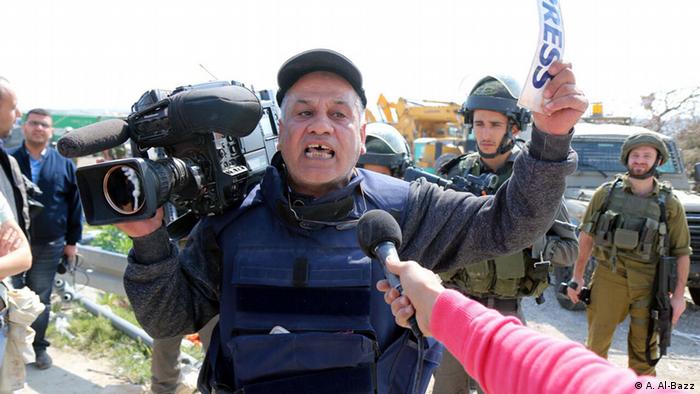 This Palestinian journalist was attacked by Israeli soldiers in March 2015. It was documented by Ahmad

"Countless attacks on journalists happen here every day," says Ahmad. Activestills.org, founded in 2005, not only provides him with a platform to publish his pictures, it also lends his reporting additional credibility because of its multinational nature. "When people hear our news stories or see our pictures, they know that the information comes from media professionals representing a wide variety of different nationalities and backgrounds." The site's reputation for objectivity is also highly valued by leading human rights and development organizations, which frequently turn to activestills.org and Ahmad Al-Bazz for picture material for their publications.

Multimedia training for the long haul 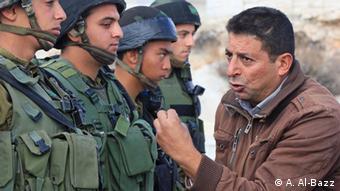 The daily confrontations between individual Palestinians (right) and Israeli soldiers. Photo from Ahmad

The young multiple-award-winning photographer says that a DW Akademie multimedia project helped to lay the foundation for the work he does today. "The training course lasted for a whole nine months, which is why I like to call it my diploma," he remembers. "It completely changed the way I work as a journalist." For the best part of a year Ahmad also worked pro-bono as editor-in-chief for the newly founded online multimedia news portal Dooz.ps, which aims to improve and develop local reporting in Nablus. Dooz.ps was part of the "Go Local" project, supported by DW Akademie and run by the German development organization GIZ for the promotion of good governance in the Palestinian territories. Since the end of the "Go Local" project, young journalism students from Nablus have continued to run the news portal on their own. Meanwhile, Ahmad’s pictures are on display in exhibitions in the West Bank and Gaza, as well as at countless venues elsewhere in the Middle East and in Europe and the US. His motto, and the catchphrase that he uses to focus on the everyday lives of people in a divided country is, "Let the facts speak for themselves."

Ahmad Al-Bazz maintains his close ties with DW Akademie and was invited to Bonn as recently as December 2015 to take part in an unusual workshop. The South2South Lab brought together over 20 journalists and media experts from around the world to develop digital solutions for improving press freedom and freedom of information. One team focused on how to improve access to information for small-scale farmers. Another group prepared the ground for a news app that would allow young Palestinians not only to access information more easily, but also to produce their own news. Looking back, says Ahmad, "My time in Bonn has given me the strength and inspiration to carry on my fight for press freedom back home." 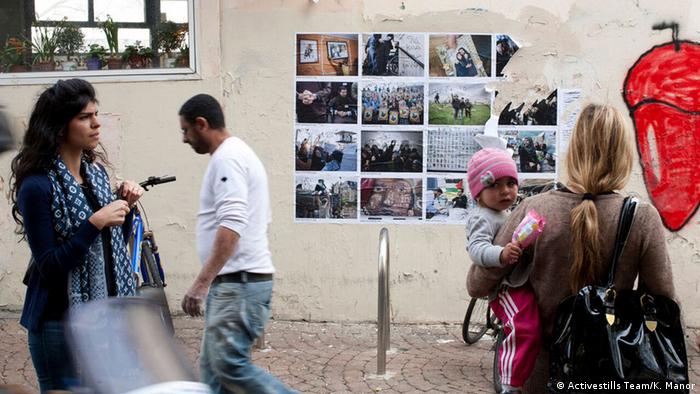 A street exhibition by the photographers' network Activestills in Tel Aviv, Israel

Precisely how difficult it is to do this is in a volatile political climate is something that Ahmad Al-Bazz rediscovers every day, even when he isn't using official channels to get his photos and messages across. He has participated in thirteen street exhibitions consisting of pictures that were simply hung by activists in public spaces, such as street corners or squares, with no prior announcement. Seven of these exhibitions took place in the Palestinian territories, six in other countries. "This is a political message which says we’re not prepared to ask any form of government for permission," Ahmad explains. The pictures depict houses destroyed by the Israeli army, children wandering the streets because they can’t get to school, or simply everyday scenes of a society characterized by shortages. The main aim is to provoke the general public, particularly in Israel, to stop and think, and to show what life is like on the other side of the border fences. "Sometimes the pictures stay up for one or two days," says Ahmad, "and sometimes the police take them down straightaway." But he concludes that if this helps to change even one person's perspective, then he feels that he has achieved a small victory. "Of course, I dream that my work will also help trigger positive change on a broader scale." That may be only a dream as yet, admits Ahmad, but it is a dream that has the power to help him carry on.

The web portal Dooz offers more than information: it's also aiming to bring local citizens and their politicians closer together. Dooz is supported by DW Akademie and is part of the GIZ's larger project "Go Local". (29.04.2014)

DW Akademie in the Palestinian Territories