At the 2015 Global Investigative Journalism Conference, journalist Munkhmandakh Myagmar felt like a kid in a candy shop. She was there to present Mongolia's efforts to establish a culture of investigative reporting. 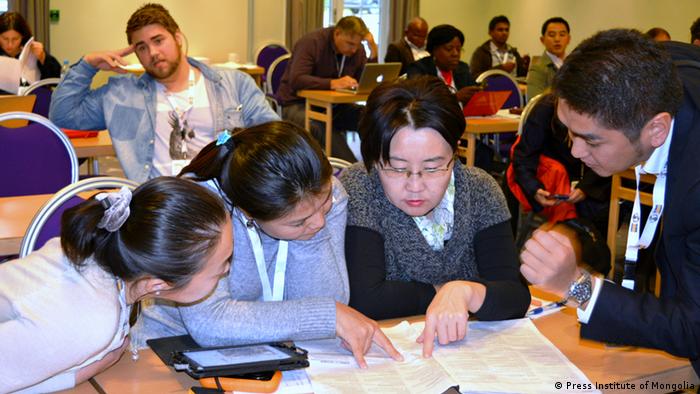 Which session to choose? Munkhmandakh Myagmar (second from right) with the Mongolian delegation

I remember standing in a candy shop as a child, my eyes dazzled from the colors of the sweets and my mouth watering at the thought of biting into one of them. It might be a strange analogy but the Global Investigative Journalism Conference program, which was held in the Norwegian town of Lillehammer in October, aroused the same feelings. With hundreds of topics marked with different colors according to the session type, and the dazzling expectation of seeing the thrilling people who were making this program so interesting, I felt like I was in the candy shop of my childhood.

Listening to the participants from the Philippines, Azerbaijan, Mexico, Algeria and other countries with limited press freedom and hearing their stories, made me wonder again what makes investigative journalism work in their countries and why it does not function well in Mongolia.

In many other countries, human rights abuses and restrictions on press freedom are even worse than in Mongolia. Yet reporters from the most repressive regimes put their lives at risk to publish groundbreaking stories uncovering wrongdoings.

What does it take for investigative journalism to succeed? 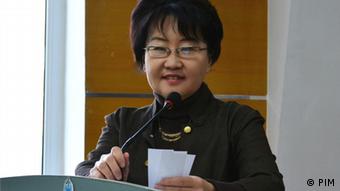 Munkhmandakh Myagmar, Executive Director of the Press Institute of Mongolia

Mongolia is one of the most peaceful countries in the world and the Freedom House continuously assesses it as a free country in terms of political rights and civil liberties. My country's lack of investigative reporting is obviously not due to it being a repressive country.

Sheila Coronel, one of the founders of the Philippine Center for Investigative Journalism who is currently Academic Dean at Columbia Journalism School, said in an interview with the Center for International Media Assistance that "investigative reporting won't necessarily work in some countries in the developing world."

Among the many factors inhibiting the development of investigative journalism, Coronel cites the poor health of the media industry, the lack of independence of local media, the low level of professional standards, the lack of an enabling legal environment, and the difficulty of accessing information.

A motor for media change

All these constraints are relevant for Mongolia. Political and financial pressures undermine editorial independence and people in power harass journalists with criminal defamation allegations. Journalist's sources are not protected by law and state secrecy laws limit access to a broad range of information. Mongolian journalists do, at times, produce stories based on in-depth research which address serious shortcomings and problems in society such as corruption or environmental degradation. However, many of these stories are based on too many unnamed sources, unverified documents or hearsay.

In Lillehammer, we held a panel discussion to talk about some of our combined experiences in doing this. Those participating in the session seemed to agree that that a strong independent journalism center can play an extremely important role in reforming the media in transition nations and sustaining efforts to make investigative journalism work.

Mongolia's Press Institute has indeed played a pioneering role in the progress of media transformations in the country. It was the institute which, after the collapse of socialism, introduced the principles of objective and independent journalism among Mongolian media stakeholders.

We do not yet have a tradition of investigative journalism in Mongolia. Professional standards in journalism are poor and our government is not necessarily tolerant of being criticized by the media. However, having a strong, independent and professional organization that is able to take the lead in media development processes is indeed an enormous advantage that is not available everywhere.

In addition to this, the Press Institute has the advantage that it is backed up by international partnerships which support its media development efforts, such as its current investigative reporting initiative with DW Akademie.

For the Press Institute, it is a rare privilege to have its trainers trained and mentored by world renowned investigative journalists. DW Akademie is also helping with the development of a new training curricula for investigative journalism, the translation and adaptation of training guidelines and manuals, and supporting individual research projects focusing on important social and economic issues in Mongolia.

This new-found awareness of the role of the Press Institute makes me look at the other participants in Lillehammer with clearer eyes. It's time to shop for more candies and enjoy the gifts from these amazing people who made this conference such an incredibly rewarding event.


Munkhmandakh Myagmar is the executive director of the Press Institute of Mongolia, an NGO with the mission to support the development of independent media in Mongolia and assist media stakeholders in improving their professionalism. Munkhmandakh completed a degree in journalism and a PhD in media and communication studies at the University of Leipzig, Germany.

The Mongolian investigative reporting initiative, a cooperation between DW Akademie and the Press Institute of Mongolia, was presented at the Global Investigative Journalism Conference in Lillehammer, Norway in October 2015. The information session discussed aspects such as how to approach establishing a journalism training program in a country with no tradition of it, the production of teaching materials and the training of local trainers, mentors, and role models. The investigative reporting project runs from 2015 to 2017 and is funded by Germany's Federal Ministry for Economic Cooperation and Development (BMZ).

At the 2015 Global Investigative Journalism Conference, journalist Munkhmandakh Myagmar felt like a kid in a candy shop. She was there to present Mongolia's efforts to establish a culture of investigative reporting. (13.11.2015)