This year's MEDIA LOVES TECH hackathon has proven that working online can be extremely productive when media workers and techies come together to develop innovative ideas and sustainable business models. 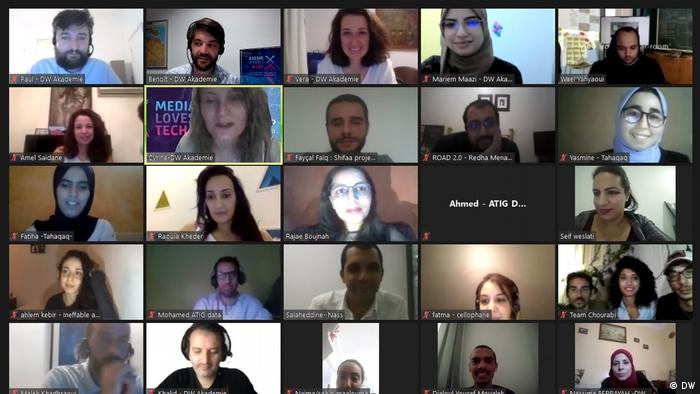 Aslama, bonjour and good morning! For three days in early October, 12 media start-up teams and 15 mentors greeted each other before getting down to work. The teams had made it to the second round of the annual media start-up competition, MEDIA LOVES TECH, where media start-up teams compete to develop prototypes that combine quality journalism with digital technology. The projects also require a viable business concept.

Originally just for teams from Tunisia, the competition was expanded this year to include teams from Algeria and Morocco.

In the competition's second phase, known as the Incubation Program, the top teams picked from the first round are coached and receive funding to further develop their prototypes. The hackathon is part of that phase and always a highlight.

"The entrepreneurs were committed and even if they lacked a business vision, they could organize their ideas and get a new perspective," noted Ines Cheniour, a Tunisian expert who coached teams on human-centered design.

Among the top projects competing this year are a podcast platform, a fact-checking online service, a data analyzing tool for journalists and an online magazine that uses the latest technology to promote cultural heritage. The experts from regional start-up ecosystems and media sectors coached the teams in solution design, user experience (UX) and prototyping, helping them to fine tune their projects or completely redefine them. The projects were judged, and a traditional pitching session rounded up the three-day virtual marathon. Due to the coronavirus, the hackathon was held online for the first time, requiring an entirely new approach that worked well.

Rajae Boujnah, a Moroccan mentor focusing on online citizen engagement in the Middle East and North Africa, praised MEDIA LOVES TECH's approach for finding and then support innovative projects. "There was a real dynamic and good vibes during the hackathon," she said, "and taking part also gave me a lot of ideas for my own activities," she added.

Creating a team-feeling among competitors from three different countries isn't a given, especially if an event is held online. But the virtual hackathon succeeded, using communication tools for structured exchanges and for sharing documents, as well as spaces for intensive talks and discussions. In addition, it has enabled more than twice as many mentors to take part this year compared to 2019 and they remain in contact with the teams.

Another mentor, Dhafer Hassine, won last year's MEDIA LOVES TECH with Taswira, a project that specializes in stock photography for media and content creators and that has since gone online. "Being part of the mentors' team is an opportunity to support and empower these new teams by sharing my experiences and things I've learned with Taswira.net," he said.

The teams have since taken part in a tailor-made coaching program run by Al Khatt, a Tunisian media non-governmental organization and partner of DW Akademie.

The competitors have until mid-November to submit their prototype along with a viable business plan. The winner team will be announced December 3 and receive a grant of 10,000 euros to further develop their project.

Regardless of who wins this MEDIA LOVES TECH, all teams will be stronger for it.

MEDIA LOVES TECH is a DW Akademie project financed by the German Federal Ministry for Economic Cooperation and Development (BMZ).