Media professionals in Morocco work in an environment where press freedom is only nominally protected by the constitution and is subject to state control. DW Akademie supports journalists there with training. 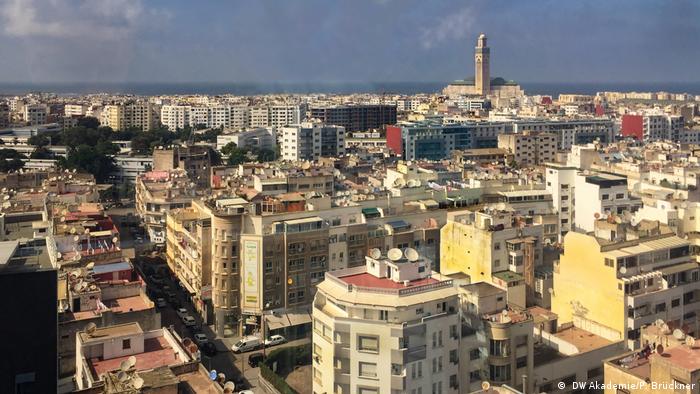 Compared with other countries in the region, Morocco has a relatively high political stability and strong civil society. However, basic rights are limited, especially in terms of freedom of expression. Reporters Without Borders' 2022 World Press Freedom Index ranked Morocco 135th out of 180 countries.

Although upheavals in 2011 did not result in a radical change, they did initiate a reform process toward more democracy and the rule of law. It includes decentralization efforts because a major development gap exists between three major cities – Rabat, Casablanca and Marrakesh – and the rest of the country. This is reflected in the uneven supply of local information.

Morocco's media market is concentrated in the country's economic center, and there is a lack of professional, local journalism. Commercial media mainly operate online portals and depend on advertising revenues. Since the largest customer is the state, it can force favorable reporting through the selective and non-transparent awarding of contracts.

DW Akademie has been active in Morocco since 2011. It is currently working with the lead partner Forum des Alternatives Maroc (FMAS) to strengthen selected community media and assist them in establishing a network. The goal is to enable community media to better bring their social and political issues into the national discourse, to better represent their own interests, and to become an integral part of the Moroccan media sector. DW Akademie is also supporting FMAS in establishing its own media department. The Internet platform E-Joussour is intended for community media to produce and prepare reports aimed at a nationwide audience, and especially at disadvantaged groups such as women. Community media will be able to use the platform to also share journalistic content.

FMAS is also implementing a project sponsored by the EU Delegation to Morocco that aims to qualify young people - especially young women - for the job market and to extend their participation in public life.

In light of the coronavirus, DW Akademie and FMAS are also supporting community media in producing a series of broadcasts about the pandemic's medium- and long-term impact at the local level. The NGO 100% Mamans is training single mothers as citizen journalists for the radio station Mères en ligne. These mothers produce a daily podcast aimed at other mothers and that focuses on COVID-19. Together with other community media, FMAS produces a daily (radio) newsletter that, for example, debunks false news about the virus and potential pneumonia.

Another project that focuses on combating fake news about the virus is funded by Germany's Federal Foreign Office and trains Moroccan media workers in data journalism.

"Mothers on Air" radio: Advocating for single mothers in Morocco

Naïma Hamdani was ostracized when she became pregnant. She's now a presenter with the radio station "Mères en Ligne" ("Mothers on Air") and fights for the rights of other single mothers in Morocco.

Data journalism in Morocco: Navigating the crisis with facts

In Morocco, public authorities are to become more transparent but little is known about how to handle public data. An innovative data journalism project focused on fact-based reporting, defying the current pandemic.

For the first time, our institution is going to present an award for online journalists under the topic “Think globally – act locally” in Morocco. (11.10.2019)

Morocco wants to bolster rural areas - as laid down in the renewed constitution of 2011. The local media play a particularly important role, and DW Akademie is supporting regional radio stations. (13.11.2015)